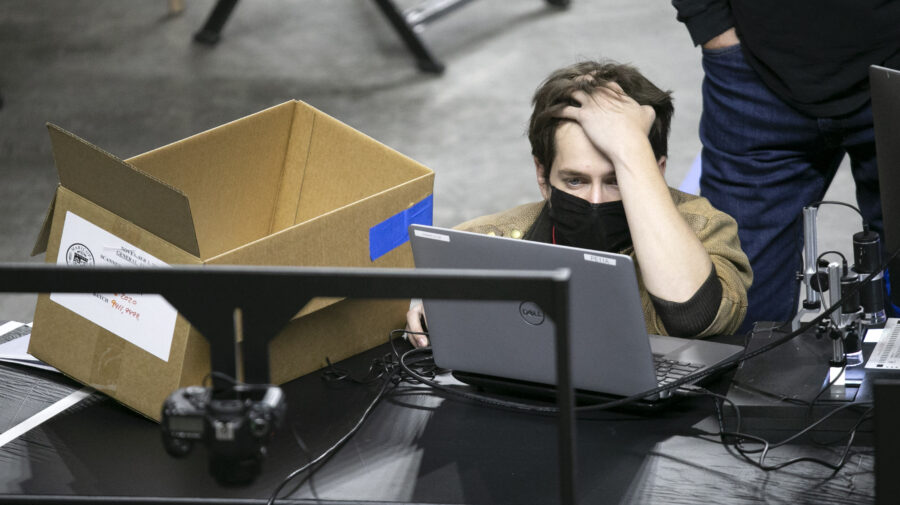 A prior recount of ballots in Arizona's Maricopa County in May. (USA TODAY via Reuters)

Following Thursday’s launch of the beta version of Gettr, a new social media platform that former Donald Trump spokesman Jason Miller is behind, the stolen election myth is populating the platform. Gettr was hacked during its Sunday launch, which reportedly saw half a million people sign up.

Accounts affiliated with QAnon posted false claims that Trump won the 2020 election and conspiracy theories about his imminent return to the presidency. Similar claims were repeated by the verified account of Steve Bannon’s War Room podcast, with one post saying it was important to “get to the bottom of November 3rd” alongside the hashtag #StolenElection. Links to debunked videos that purport to show 2020 ballots being manipulated or destroyed in various US states have also been liked nearly 2,000 times on Gettr.

Posts shared under the hashtag #ArizonaAudit focused on alleged fraud in the vote-counting process in Arizona’s Maricopa County, citing reports by One America News Network and The Conservative Brief, outlets that regularly publish conspiracy theories. The two articles told readers to expect “significant discrepancies” between Maricopa County’s original ballot count and the ballots being audited, crediting Sonny Borrelli, a Republican member of the Arizona Senate; Borrelli had retweeted a July 1 post that made the same claim. The July 1 tweet was posted by an account with 544 followers whose bio says it works to provide election audit updates but does not have any official backing.

Previous audits in Arizona have been completed and no problems were uncovered. “This latest process, however, is being run by a company without election experience that’s led by a CEO who has spread election-related conspiracy theories,” one NPR reporter wrote last month. The current audit has yet to issue any conclusions and the process is still underway, according to The Washington Post. — Esther Chan