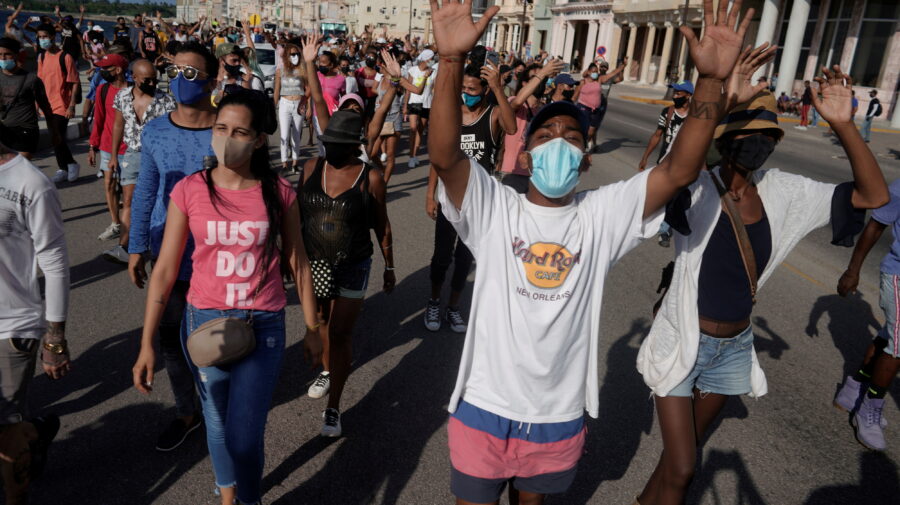 People shout slogans against the government during a protest in Havana, Cuba, on July 11. (Reuters)

As thousands of Cuban protesters hit the streets yesterday amid a deep economic crisis, a range of misleading narratives proliferated on social media.

Demonstrations broke out in the capital Havana and elsewhere on the island, including San Antonio de los Baños, over food and electricity shortages along with inadequate healthcare resources amid a resurgence in Covid-19 cases. Amid the upheaval, which saw protesters chant, “Down with the dictatorship,” the hashtag #SOSCuba spiked on Twitter, with at least 1.4 million tweets and retweets, according to Trendsmap.

But US commentators attempted to draw misleading conclusions about the protests and parallels to domestic politics, building on a false narrative advanced by many in the Republican Party that paints all Democrats as “socialists.” For example, conservative commentator and former Navy SEAL Robert J. O’Neill said in a tweet with at least 1,300 shares, “Cubans are denouncing communism. Our schools are glorifying it,” an apparent reference to the disinformation-fueled panic over “critical race theory” in education.

Several prominent posts also aimed to discredit Cuba’s state-run healthcare system. A tweet from Turning Point USA’s Charlie Kirk read, “Cubans are mass protesting the socialized medicine system brought to them by Castro and fawned over by American progressives.” Kirk’s post, which was shared at least 2,000 times, did not acknowledge the context that while the Cuban government has been criticized for opting to produce its own Covid-19 vaccines rather than acquire them from abroad, the US embargo against Cuba has also made it harder to buy syringes needed for the country’s vaccination drive.

A Biden administration official yesterday expressed US support for the Cuban protesters. Cuba’s director general for US affairs, Carlos F. de Cossio, responded, “US State Department and its officials, involved to their necks in promoting social and political instability in #Cuba, should avoid expressing hypocritical concern for a situation they have been betting on.”

Former President Donald Trump had reversed Barack Obama’s rapprochement with Cuba, launching a policy of “maximum pressure.” President Joe Biden had announced a review of the impact of sanctions on Cuba on his first day in office. The Trump-era policies remain in place.