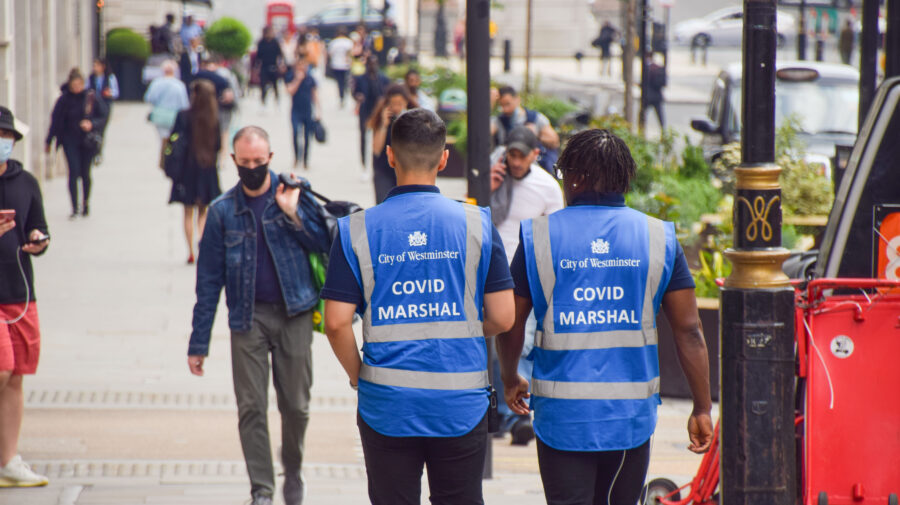 Covid-19 marshals walk along a street in London. (Vuk Valcic/Sipa via Reuters)

As worldwide concern grows over the spread of the highly contagious Covid-19 Delta variant, public health messaging is being met with misleading commentary.

The latest data from the Centers for Disease Control and Prevention put Delta’s prevalence at 10 per cent of new Covid-19 cases in the US, with more current estimates placing the figure at 37 to 42 per cent. In the UK, often a harbinger of things to come in other countries, Delta makes up around 95 per cent of new cases, which had earlier prompted a delay to the further lifting of lockdown measures. Elsewhere, Sydney, Australia entered a two-week lockdown on Saturday, and the government of Israel, one of the world’s most vaccinated countries, reimposed an indoor mask-wearing requirement on Friday — both due to concerns over the variant. In India, a further mutation of the Delta variant dubbed “Delta Plus” has been branded a variant of concern.

As countries sound the alarm over Delta, some commentators have pushed longstanding anti-lockdown and anti-vaccine narratives. On Bitchute, a video posted by the “Fearless Nation” account, which has over 10,000 subscribers, featured a clip of anti-vaccine activist Del Bigtree advancing the conspiracy theory that the variant is a “false flag.” The video has at least 2,300 views.

A post on the QAnon message board Great Awakening misleadingly suggested that because around half of the adults who tested positive for the Delta variant in Israel were fully vaccinated, the vaccines are “worthless.” The claim ignores the context that this figure is in line with known efficacy statistics, and that few people who were vaccinated developed severe illness.

The World Health Organization recommends the continued wearing of masks and other precautions in light of the Delta variant’s spread, because the “[v]accine alone won’t stop community transmission.” In response to the WHO’s guidance, Fox Nation host Tomi Lahren said, “Fool us once, shame on you. Fool us twice?! Not gonna happen!!!,” in a tweet shared at least 1,100 times. — Chris Looft