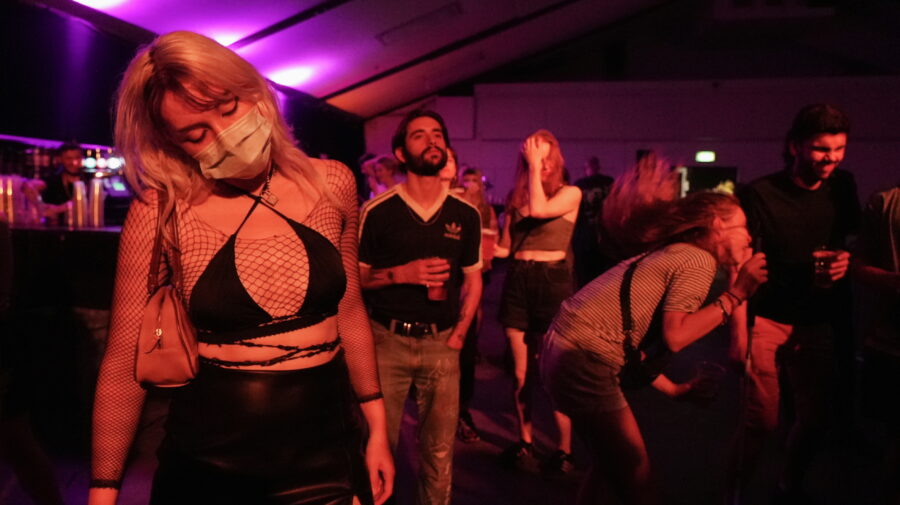 Partygoers at a nightclub in London after England lifted most coronavirus restrictions on July 19. (Reuters)

UK Prime Minister Boris Johnson announced yesterday evening that people attending nightclubs and other mass events in England will need to show proof of vaccination from the end of September. The announcement — delivered virtually from Chequers, the prime minister’s country house, because Johnson is self-isolating after coming into contact with Health Secretary Sajid Javid, who on Saturday tested positive for Covid-19 — came hours after England removed virtually all Covid-19 restrictions in what many have dubbed “Freedom Day.” The decision has fueled criticism of a perceived “U-turn” after the government previously ruled out “vaccine passports,” as well as questions and confusion around why clubs have been allowed to reopen this week without restrictions. Johnson said the wait was to allow all over-18s the opportunity to get fully vaccinated. The news has sparked misinformation and unevidenced claims.

As #NightClubs trended on Twitter, longstanding and inflammatory claims that the plans will create “medical apartheid” re-emerged. talkRADIO presenter Julia Hartley-Brewer warned in a broadcast receiving at least 28,800 views on Twitter that “vaccine passports” for nightclubs represented a “slippery slope of becoming a two-tier society with medical apartheid.” Meanwhile, social media users falsely claimed that Covid-19 vaccines are “experimental” and that young people were being “coerced” to take them. A petition resisting “vaccine passports” with more than 100,000 signatures is also recirculating alongside claims that certification is “unnecessary.” Scientists have warned that nightclubs and other venues can quickly become superspreader events, particularly as the UK grapples with surging cases and rising hospitalizations.

Unevidenced claims that the government is quietly planning to require “vaccine passports” for all venues and places of work are also spreading. “They are being planned for ALL large gatherings & that includes sports events, theatres, and yes, even pubs. This goes way beyond nightclubs #NoVaccinePassportsAnywhere,” lockdown critic and regular sharer of misinformation Neil Clark wrote in a post with at least 1,221 retweets. It’s possible that other venues might require proof of vaccination in the future, but Johnson said identification wouldn’t be required in pubs. Other Twitter users suggested the government was “playing” the public and that “vaccine passports” for clubs are a precursor to mandatory vaccine certificates for all indoor scenarios, with one asking: “See where this is going?” — Lydia Morrish