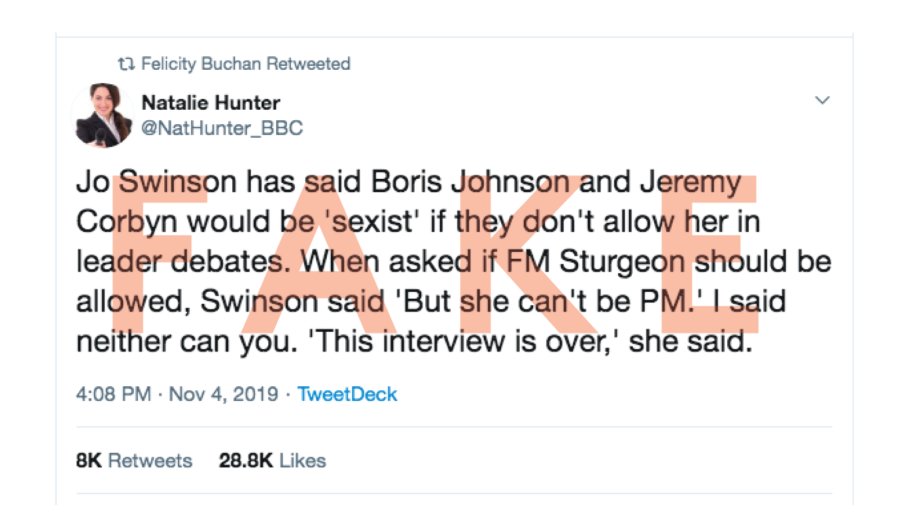 The fake tweet has been shared nearly 8,000 times. Screenshot by author. 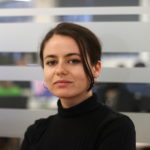 A tweet mocking Lib Dem leader Jo Swinson from a fake BBC account has been shared thousands of times online, including by Felicity Buchan, the Conservative candidate for the marginal seat of Kensington in London.

The tweet, from an account under the name Natalie Hunter falsely purporting to be “chief political correspondent for BBC Scotlandshire”, appears to poke fun at Swinson for her claims of sexism over exclusion from the ITV televised debate. It has been shared more than 8,000 times, with many Twitter users appearing to believe the message to be true.

It is not clear what Ms Buchan’s motivations are in retweeting the fake account. The Conservative candidate is in a three-horse race for the London constituency against former Conservative minister Sam Gyimah, who defected to the Lib Dems after rebelling against the Government over Brexit, and the Labour incumbent Emma Dent Coad.

She said: “I shared the tweet from the Natalie Hunter account in the sincere belief it was a genuine BBC reporter and a genuine interview.

“As soon as I was made aware that the account and content was false, I retracted the tweet without hesitation, in the spirit of the positive campaign we are running in Kensington. We must call out false news and I hope that the other candidates will agree to do the same as the campaign begins.” 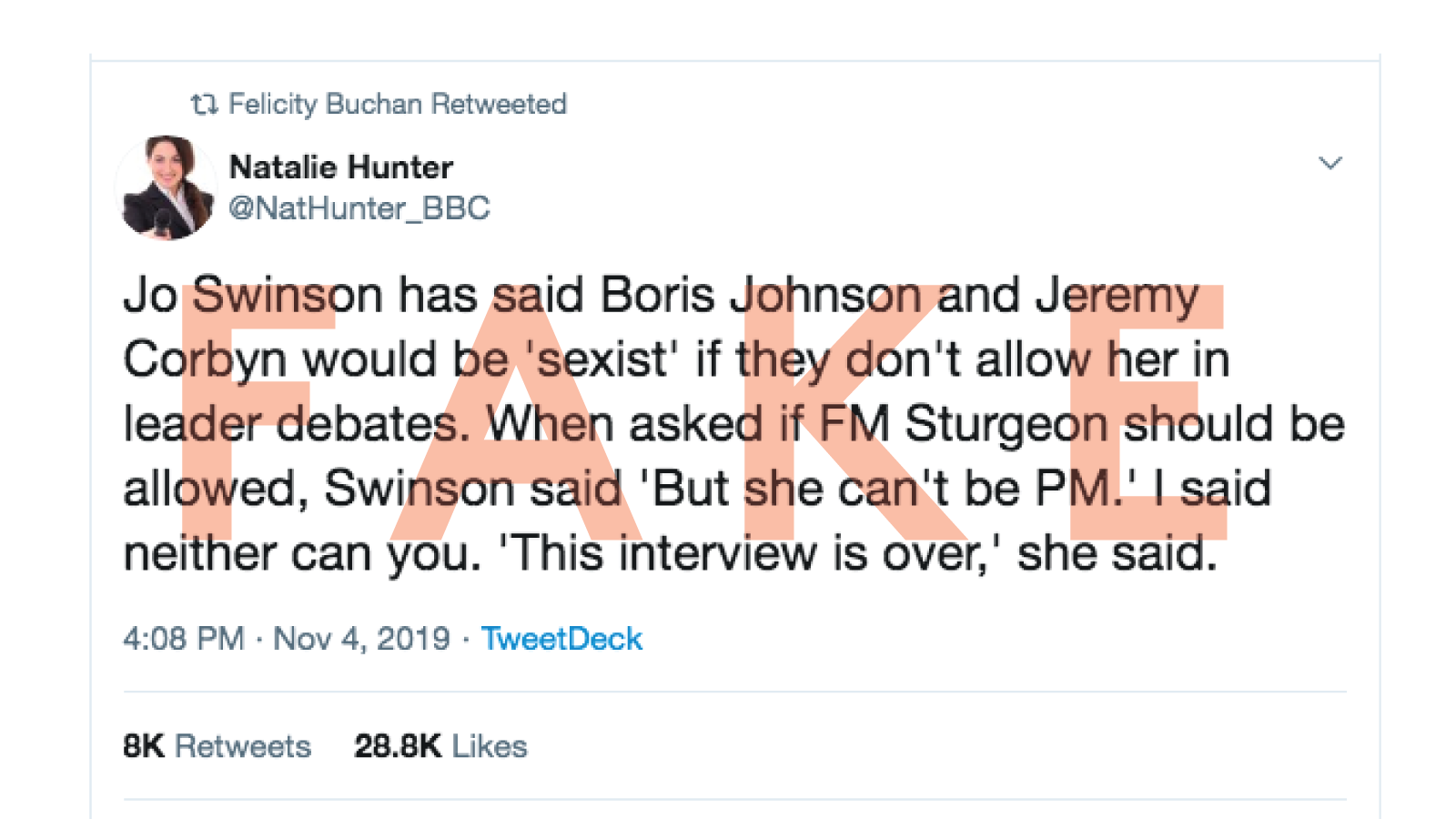 The fake account, which has ‘BBC’ in the handle and a cover image of the BBC newsroom, tweeted: “Jo Swinson has said Boris Johnson and Jeremy Corbyn would be ‘sexist’ if they don’t allow her in leader debates. When asked if FM Sturgeon should be allowed, Swinson said ‘But she can’t be PM.’ I said neither can you. ‘This interview is over,’ she said.”

A reverse image search of the account’s profile picture shows it is listed as ‘female reporter with microphone’ on a number of stock image websites. The account has under 5,000 followers.

The fake account’s profile picture can be found in image libraries through a reverse image search.

While some replies pointed out that the tweet was satirical, others believed it to be genuine BBC reporting. One user wrote: “Amazing. Fake feminist exploiting women’s struggle in her quest for personal power. When she last got into power she inflicted misery on millions. Women worst affected.”

Another wrote: “This clip (when released) could be as funny as the filthy piece of toerag lady.” 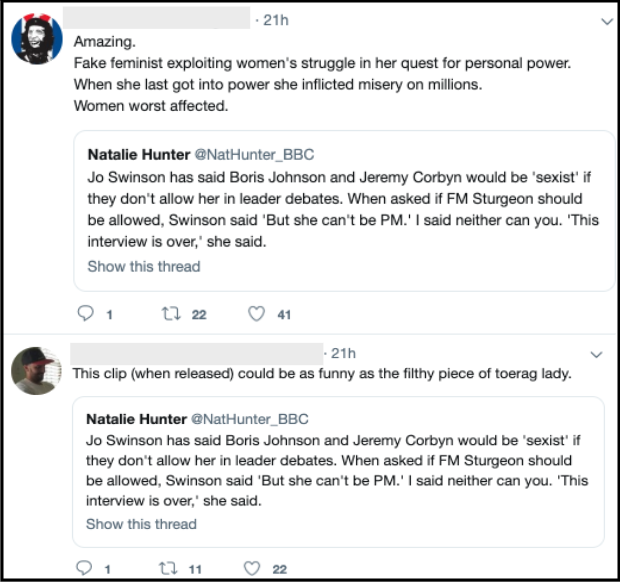 Many accounts believed the claim to be false.

A statement at the foot of the BBC Scotlandshire website reads: “This site contains news items which are often ridiculous, generally fictitious, entirely ill-informed and simultaneously biased in favour of the status quo and against the Scottish National Party, the Scottish Government and Scottish Independence in particular. Any similarity with other national broadcasters is entirely unfortunate.”

Swinson questioned whether the decision to exclude her from the leaders’ debate was motivated by sexism on Saturday. This may lend credibility to the falsehood and explain why the tweet has been so widely shared.

The rest of Ms Buchan’s recent tweets and retweets are serious content about the general election — including one about the Liberal Democrats’ alleged misleading campaign literature.

Kensington is seen by many as a key marginal, which the Liberal Democrats are trying to make a three horse race with ex-Tory Sam Gyimah as their candidate. The seat had the smallest majority in England, with Labour MP Emma Dent Coad elected by a 20 vote majority.

This is not the first time the BBC has been parodied in the lead up to an election.

During the 2017 election, a doctored screengrab of the BBC website encouraged Conservative and Ukip supporters to vote one day after the polls had closed. 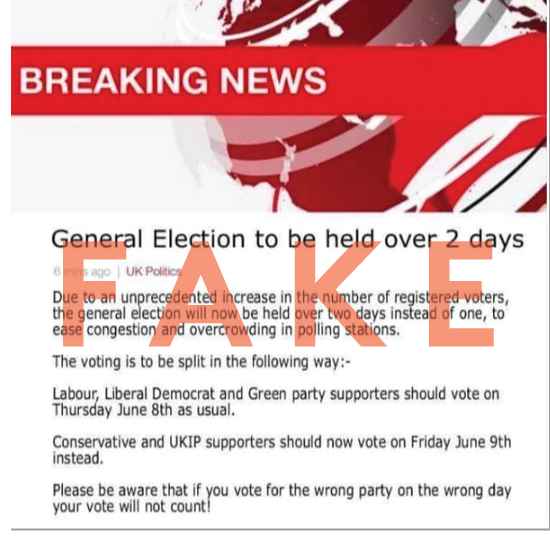 The doctored screenshot was shared during the 2017 election.