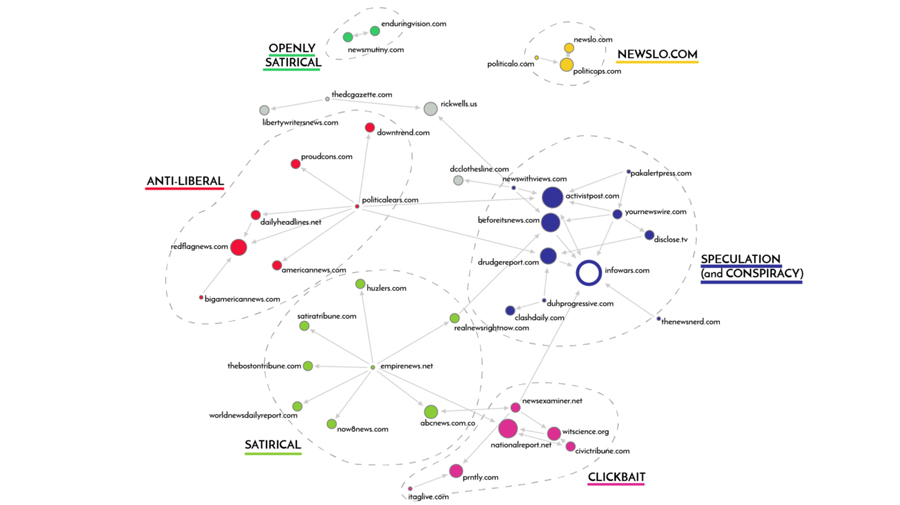 We're excited to announce support for new research which will investigate the misinformation ecosystem across Europe based on the technological Infrastructure of 'fake news' sites.

We’re so pleased to announce that we’re funding a new project to create “A Field Guide to Fake News,” led by Liliana Bounegru, Jonathan Gray and Tommaso Venturini. It will be launched at the International Journalism Festival in Perugia in April. Next week the team are bringing together multiple researchers to collaborate on mapping the misinformation ecosystems across Europe, with a particular focus on the Netherlands, France and Germany, because of upcoming elections. As the researchers stated in their proposal to us, they want to: enhance public understanding of the scope, nature and composition of fake news phenomena in multiple European language spheres; generate lists of actors and sources making up fake news ecosystems in multiple European language spheres; and equip journalists, researchers and activists with techniques to trace these phenomena using leading digital tools and methods.

In the wake of concerns about the role of “fake news” in relation to the US elections, the project aims to catalyze collaborations between leading digital media researchers, data journalists and civil society groups in order to map the issue and phenomenon of fake news in US and European politics.

The guide will look at how digital methods, data, tools, techniques and research approaches can be utilised in the service of increasing public understanding of the politics, production, circulation and responses to fake news online. In particular it will look at how digital traces from the web and online platforms can be repurposed in the service of public interest research, investigations, data stories and data journalism projects.

If you’re a data journalist or researcher interested in collaborating on data stories or investigations around the fake news phenomenon in your country, then please do drop us a line.

The guide will build on research projects that were conducted at the Digital Methods Winter School 2017, several of which were written up in this recent piece for the LSE Impact Blog. We’ve also been collaborating on the development of research protocols with researchers at the Digital Methods Initiative (University of Amsterdam), the Techno-Anthropology Lab (Aalborg University Copenhagen), Density Design (Politecnico di Milano) and the médialab (Sciences Po, Paris). The next step will be a “data sprint” at the University of Amsterdam next week, which you can see more about here.

Journalists such as Craig Silverman at BuzzFeed News have been experimenting with different approaches to using digital data to investigate the phenomenon – leading to a series of high profile stories and investigations. Through the guide we’d like to see what data journalists and digital researchers can learn from each other about different ways to analyse and narrate complex issues online.

The guide will be the first project of the Public Data Lab – an interdisciplinary network seeking to facilitate research, democratic engagement and public debate around the future of the data society – in collaboration with the First Draft Coalition.

The project also builds on a research agenda that we have been developing for several years, looking at how to stage productive encounters between digital sociology and data journalism – which we’ve presented and discussed in New York, Utrecht, Berkeley, Miami and Copenhagen.

Professor Richard Rogers will also be editing a volume on Fake News, Filter Bubbles and Meme Machines on Amsterdam University Press, drawing on this and other associated work. A call for chapters will be issued shortly.