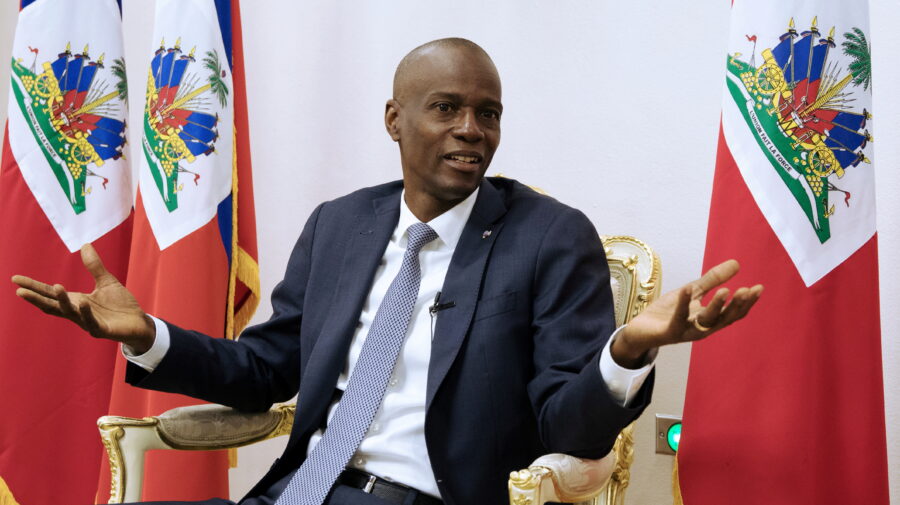 Haiti's President Jovenel Moïse at the National Palace of Port-au-Prince in January 2020. (Reuters)

The assassination of Haiti’s president, Jovenel Moïse, has reawakened a pervasive conspiracy theory about former US President Bill Clinton and former Secretary of State Hillary Clinton, both of whom have long maintained ties with Haiti via positions in government and international organizations. Moïse was shot and killed early Wednesday at his residence in the capital, Port-au-Prince; his wife, Martine, was injured in the attack and was transported to Miami, Florida for treatment.

Interim Prime Minister Claude Joseph, who announced Moïse’s assassination, has declared a nationwide “state of siege.” Late Wednesday, police said that four “mercenaries” behind the assassination had been killed and two others captured following a gun battle. No further details on the suspects or their motives have been released.

In a widely circulating video apparently taken during the attack, a person speaking English can be heard claiming it is an operation by the US Drug Enforcement Administration; a State Department official called the claim “absolutely false,” the Miami Herald reported. But the absence of concrete information about the assailants, along with the video, have fueled the latest chapter in the sprawling conspiracy theory that suggests that the Clintons have orchestrated the killings of dozens of people. The terms “Clintons” and “Clinton Foundation” trended on Twitter matched with a number of posts advancing the conspiracy theory.

Right-wing influencer Jack Posobiec posted a tweet yesterday that shows Bill Clinton and Moïse shaking hands and that read, “Bill Clinton and the now former President of Haiti.” Virginia congressional candidate Jarome Bell tweeted, “So…What happened to the money the Clinton Foundation raised for Haiti? Asking for a friend?” Anti-Muslim activist Brigitte Gabriel called for the Clinton Foundation to be “audited and indicted.”

Numerous posts from unverified accounts, some with thousands of followers, also shared conspiracy theories that the Clintons were involved in Moïse’s death. On the video platform Bitchute, which is popular with conspiracy theorists, a video predating Moïse’s assassination that alleges the Clintons engaged in human trafficking via Haiti was re-uploaded on the day and viewed at least 9,300 times. A link to that video was also pinned to the top of the QAnon message board Great Awakening the same day.

The “Clinton body count” conspiracy theory extends so widely that Washington State University Vancouver researcher Mike Caulfield cites it as an example of “trope-field fit.” The phenomenon is a process by which a narrative convention — in this case, the conspiracy theory that the Clintons murder their associates and rivals — is matched with news events that serve as entries in a “field” — here, the death of anybody who knew Bill or Hillary Clinton. Last month, for example, the conspiracy theory was reawakened when a reporter who had once covered the Clintons died of an apparent suicide.

While there is no evidence to suggest that Moïse was killed by the Clintons, the complicated legacy of their efforts in Haiti — shoddy construction, failed investments and the promotion of questionable macroeconomic policies — contributes to the broader misinformation narrative that they exploit the country’s residents in more nefarious ways. — Chris Looft