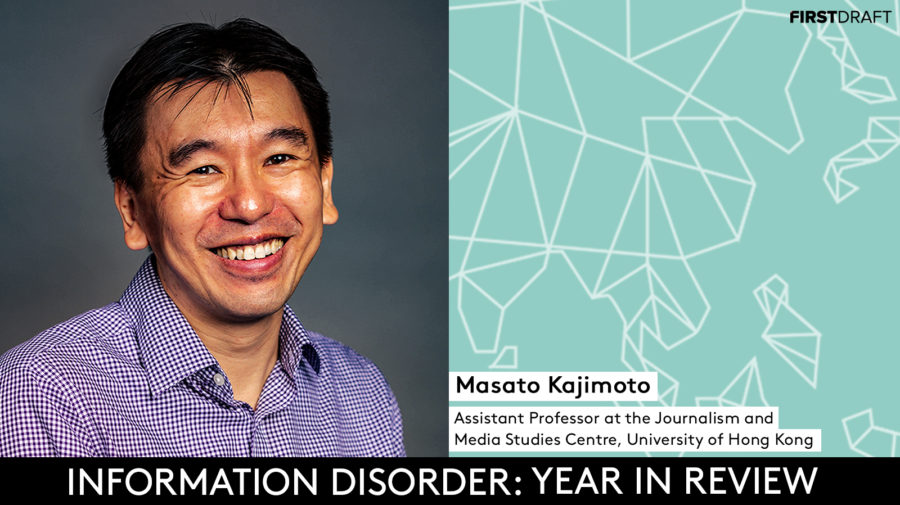 Masato Kajimoto, assistant professor of practice at the Journalism and Media Studies Centre at The University of Hong Kong, gives his thoughts on 2019.

Mis- and disinformation moved up the news agenda over the last 12 months as researchers, journalists and the public faced unprecedented problems navigating the online news ecosystem. Information Disorder: Year in Review hears from from experts around the world on what to expect and how to be more resilient in 2020.

Masato Kajimoto is an Assistant Professor of Practice at the Journalism and Media Studies Centre, The University of Hong Kong. He specialises in news literacy education and misinformation ecosystem research in Asia.

Masato Kajimoto: The ongoing civil unrest that has engulfed Hong Kong since June 9 created a political environment under which misinformation and disinformation are produced, believed and disseminated at an unprecedented volume and speed in our polarised society.

Public discourse in Hong Kong, especially online, is now inundated with opinionated mockeries, political memes, unsubstantiated claims, cherry-picked facts, extreme views, doctored images, propaganda, and other types of potentially misleading content. Sifting through all this has become a real challenge for everyone this year.

Close to my neighborhood. Not as many families as I thought. Still a sizable crowd. #HongKongProtests pic.twitter.com/Uot1fiR0DQ

Our city has been facing non-stop breaking news situations on a daily basis for more than six months. Many frontline journalists got attacked and injured physically while covering the violent clashes between protesters and riot police. Some reporters are also experiencing cyber-harassment and doxxing. If this political crisis continues in 2020, such threats could escalate.

Another potential threat is an attempt by the authorities to limit journalists’ access to information and regulate online speech, both of which do not look imminent as of this writing. Still, there have been some talks about such a move occasionally.

Many journalists in Hong Kong seem to lack basic knowledge and skills to take advantage of OSINT [open-source intelligence] tools and techniques in general. Learning those would be the first step.

Government-initiated “fact-checking” projects are common in Asia — China, Indonesia, Singapore, Taiwan, Thailand… The word “fact check” is as loaded as “fake news” in this part of the world nowadays. https://t.co/IZtldUWZt2

If you could click your fingers and make a change, what changes would you make in terms of fixing the problems of where technology and society overlap?

I know this sounds unrealistic, but I would change the ways in which the internet is governed and regulated globally so that we have an international system with protocols that aim to safeguard free speech, penalise abuse and prevent harm no matter where.

Rogue stakeholders must be held accountable by an international judiciary, although it is hard to imagine how such a system could be established technically as well politically.