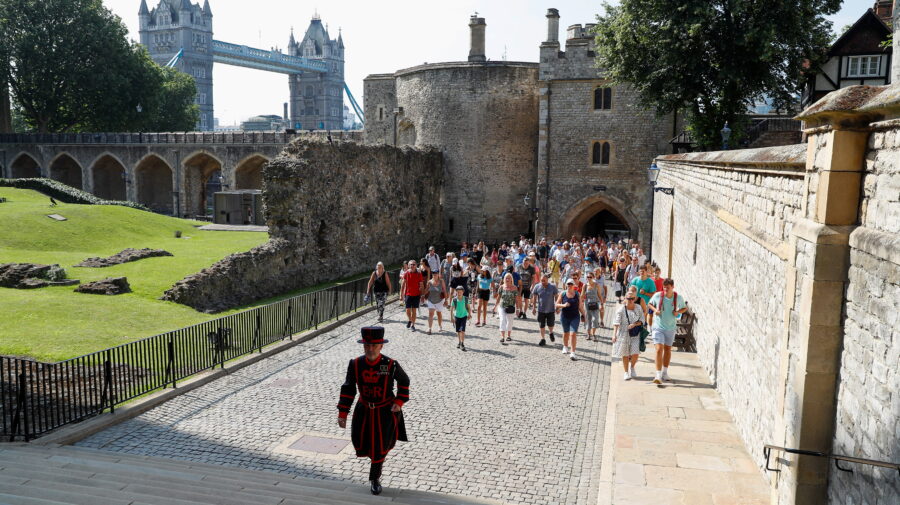 The "Beefeater" tour at the Tower of London resumes today after 16 months. (Reuters)

England today lifted nearly all Covid-19 restrictions as cases surge and hospitalizations rise, prompting a wave of confusion and baseless claims. As anti-lockdown campaigners staged a protest at London’s Parliament Square, prominent anti-lockdown figures rejected the idea of the so-called “Freedom Day,” with Keep Britain Free calling it “nothing of the sort” and pointing out restrictions that remain. The Telegraph’s chief political correspondent also dubbed the unlocking a “farce” in light of more than 520,000 people being “pinged” by the NHS contact-tracing app and asked to isolate.

After Health Secretary Sajid Javid tested positive for Covid-19 on Saturday, Prime Minister Boris Johnson and chancellor Rishi Sunak were also alerted by NHS Test and Trace as close contacts. The pair initially intended to avoid isolation rules as part of a “pilot scheme” prioritizing testing over quarantine for essential government business. But public anger prompted a U-turn as people threatened to delete the NHS contact-tracing app. A slew of users and journalists said it was “one rule for us, one rule for them,” while others insulted the app’s users and encouraged people to delete it.

As face masks move from a legal requirement to “personal responsibility” under the new rules — although transport operators and others can mandate them on their premises — social platforms also erupted with anti-mask posts. Regular source of misinformation “Darren of Plymouth” shared the false claim that masks are “useless” and set a face covering alight in a video viewed at least 20,000 times. “Burn your mask, it’s freedom day. Never put them back on,” he said in the video. Misleading claims also circulated about the surge in Covid-19 cases in the UK. Anti-lockdown account “????8 ????” shared a video with at least 7,000 views that purports to show cross-contamination and disarray at a Covid-19 testing center. “Wonder why everyone and everything is Covid19 Positive, well it’s simple,” the account wrote, baselessly claiming case data is a “sham.”

Meanwhile, news that the government will encourage hospitality venues to ask customers for proof of vaccination has prompted calls for resistance. The director of anti-surveillance organization Big Brother Watch asked the group’s Twitter followers to reconsider compliance with the NHS Covid-19 “vaccine passport” app, writing in a post with at least 1,279 retweets: “It’ll never end, and expand far beyond covid.”

On the other hand, a surge in uproar against the lifting of virtually all Covid-19 measures highlights split public opinion. Fifty-seven per cent of Brits are worried about today’s further lifting of measures, and a global group of 1,200 scientists has called the UK government’s decision “unethical.” Many social media users expressed dismay with “Freedom Day,” with some calling the lifting of restrictions “absolutely crazy.” — Lydia Morrish