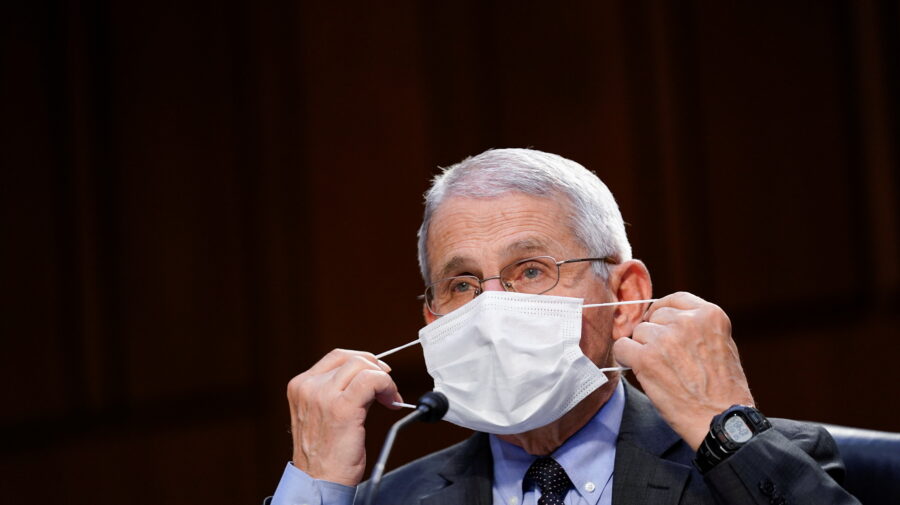 Dr. Anthony Fauci adjusts his mask during a US Senate Committee hearing in March. (Reuters)

On Sunday, Dr. Anthony Fauci, the United States’ top infectious disease expert who also serves as chief medical adviser to President Joe Biden, told CNN’s Jake Tapper that the Centers for Disease Control and Prevention was considering changing its mask guidance. The CDC’s “preliminary conversations” with the Biden administration are around whether to reinstate mask recommendations — which had been dropped in May — for the fully vaccinated as cases surge amid the highly contagious Delta variant and stalled vaccinations. But the news is fueling conspiracy theories and false claims from politicians and influencers.

Sean Parnell, a Republican US Senate candidate from Pennsylvania, posted a tweet in response to Fauci’s comment that read in part, “This is all about government control freaks not wanting to give up their power over us,” a reference to the broad misinformation narrative that Covid-19 restrictions are part of a plot to control the population. A similar sentiment appeared in a tweet from conservative talk radio host Buck Sexton, who also suggested, “The only way out of this will be mass noncompliance- and it’s going to get ugly out there.”

Meanwhile, former federal health officials told NBC last week that more businesses and government agencies are likely to enact Covid-19 vaccine mandates once the Food and Drug Administration fully approves at least one of the three shots available in the US. (The shots are currently being offered under emergency use authorization.) In response to the NBC story, US Representative Thomas Massie, a Kentucky Republican who has shared misleading claims about the CDC, tweeted: “The protests in Europe and Australia are going to look like pajama parties compared to the protests in the US if they try vaxxports or mandates here.” A growing number of countries are enacting or considering vaccine mandates. — First Draft staff