Misinformation spreads as the Taliban sweeps into Kabul 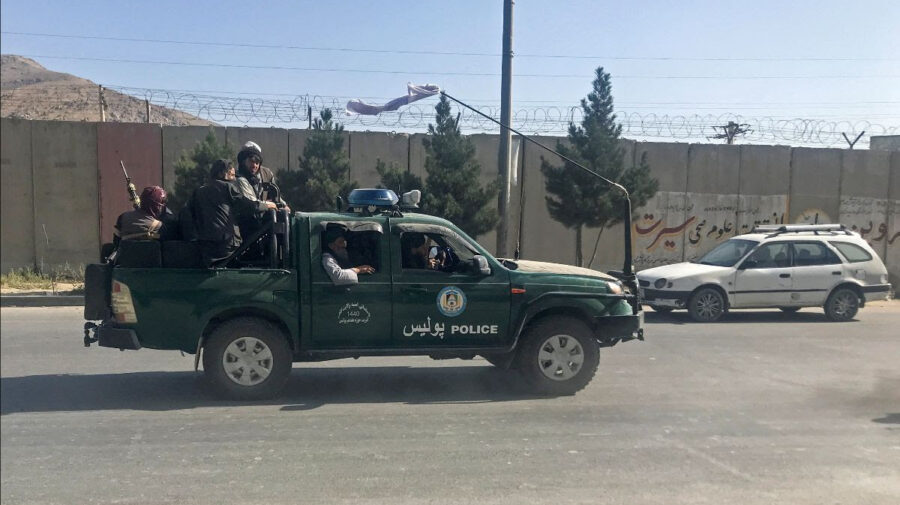 Taliban fighters ride on a police vehicle in Kabul on August 16. (Reuters)

Videos of Taliban insurgents inside Kabul’s presidential palace Sunday effectively signaled the transition of power from a US-led coalition to the militant group — and the Biden administration’s first major foreign policy crisis. The news also led to highly critical responses from known purveyors of misinformation.

Following news that the Taliban had entered the Afghan capital and that President Ashraf Ghani had fled, hashtags such as #BidenMustResign and #WheresBiden were trending on Twitter. CrowdTangle data from late Sunday shows the public social media posts that gained the most engagement in the preceding 24 hours were mostly critical of President Joe Biden’s handling of the US troop withdrawal. The keywords “Afghanistan” and “Taliban” also topped the day’s search terms in the US, with more than a million searches within hours, Google Trends data shows.

On Gettr, the social media platform recently launched by a former Donald Trump adviser, Majorie Taylor Greene (R-Ga.), who frequently promotes conspiracy theories, posted a series of misleading or false claims citing evidence from what she claimed was a White House briefing for Congress about Afghanistan. Greene said, “The military equipment and arms were left on purpose for the Afghan military to supposedly defend themselves. But they have handed it all over with no resistance” and that “5,000 prisoners have been released from the [Bagram Air] base. Known terrorists.” These narratives were shared across various social media platforms.

Although some Afghan soldiers reportedly surrendered their weapons, they did so in the face of a battle against the Taliban without support from the US or Afghan national army and police forces. The Taliban has executed soldiers who surrendered, according to media reports and the US Embassy in Kabul. Meanwhile, Afghan forces manning the Bagram Air Base, which served as a prison for around 5,000 Taliban and Islamic State fighters, did surrender Sunday, but the prisoners’ whereabouts are currently unknown, with some journalists reporting that the prisoners were being transferred and not “freed.” The primary theme behind Greene and others’ claims is whether Biden is responsible for the Taliban’s return to power.

On Sunday, former President Trump waded into the issue, releasing a statement calling for Biden’s resignation. This was echoed by his supporters, some of whom baselessly claimed that the fall of Kabul was orchestrated as a distraction from the Maricopa County election audit, a Republican-led effort that has been widely criticized, and which is nearing completion. Some of these individuals brought up the “stolen election” myth.

Others blamed Trump for signing a deal with the Taliban in Doha, Qatar, in February 2020, restricting military actions against the militant group and paving the way for the US to withdraw by May 2021. These users said that Trump and former Secretary of State Mike Pompeo facilitated the Taliban’s return to power by negotiating for the release of the insurgent group’s co-founder and political leader, Mullah Abdul Ghani Baradar, from a Pakistani jail in 2019. Baradar, who signed the Doha agreement on behalf of the Taliban, is expected to lead the Islamic Emirate of Afghanistan — the name of the country under Taliban rule. — Esther Chan, Stevie Zhang