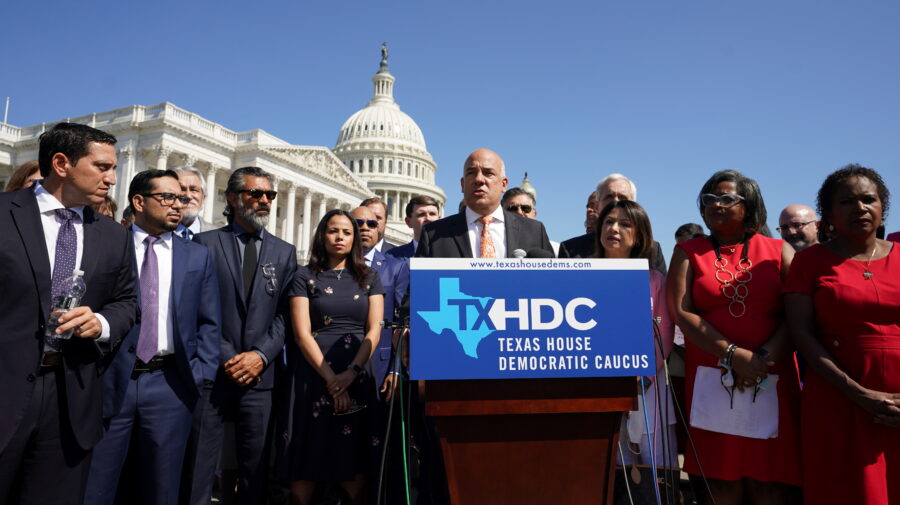 Democratic members of the Texas House of Representatives in Washington, D.C. on Tuesday. (Reuters)

QAnon influencers have seized on the news that Texas House Democrats, who fled the state for Washington, D.C., on Monday in a bid to delay a Republican-backed voting bill that they say threatens voter rights, could be subject to arrest upon their return.

Texas Democrats have previously used this tactic, known as breaking quorum, to stall legislation. Arresting and prosecuting Democrats and their allies has long been a tenet of the QAnon conspiracy theory. Now many prominent disinformation actors are envisioning the failed prophecy as eventually taking place. They include Michael Flynn, the disgraced former national security adviser-turned QAnon amplifier. In a Telegram post to his over 240,000 followers, Flynn praised Gov. Greg Abbott for voicing support for Texas’ GOP-controlled House. Abbott had threatened to arrest Democratic lawmakers who left the state.

“Don’t run from your responsibility, exercise it,” wrote Flynn, the former Army lieutenant general who once suggested former President Donald Trump impose martial law to overturn his loss to Joe Biden in the 2020 election. “Gov Abbott Thank you for your display of true leadership and courage.”

Similarly, QAnon John, a major QAnon influencer, applauded the news. “76-4!!! God, I LOVE Texas. JUSTICE WILL BE SERVED,” he wrote in a Telegram post, in reference to the 76 House representatives who approved the use of arrest warrants.

State legislators — both Democrats and Republicans — have a history of walking out to break quorum, with varying degrees of success. Experts say there is no obvious legal path or recent precedent for arresting lawmakers who break quorum by leaving the state.

A photoshopped image of some Texas Democrats wearing orange jumpsuits has been shared by some of the most prominent QAnon influencers, such as Praying Medic and The Punisher. The photo was also shared to a QAnon group on Gab with over 171,000 members. “Gitmo traveler,” reads the post, implying that these lawmakers would be imprisoned at Guantanamo Bay.

Yesterday, President Biden blasted voting limits as “un-American” and said preserving voting rights was the “test of our time.” Texas is one of several states rushing to enact strict voting laws in the wake of Trump’s false claims that the 2020 election was stolen. — Keenan Chen