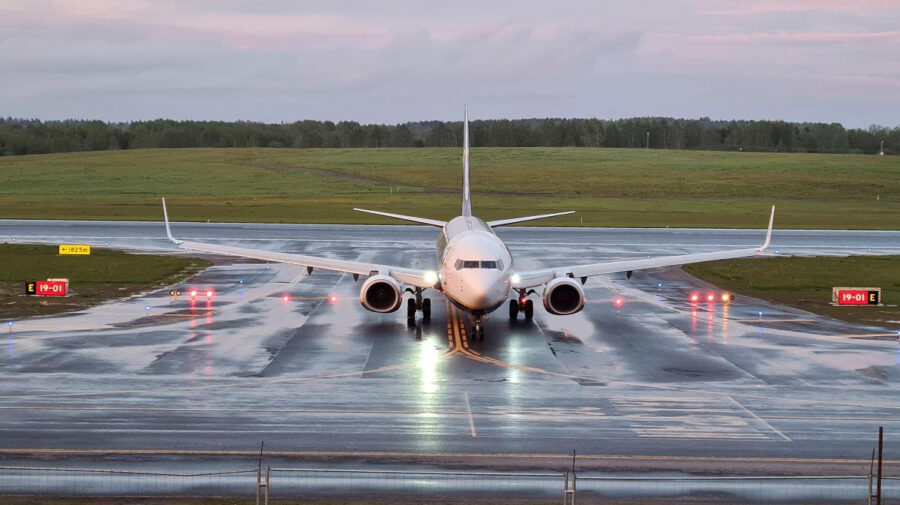 A Ryanair plane after it landed in Vilnius, Lithuania. (REUTERS/Andrius Sytas)

The UK and EU have begun closing their airspaces to Belarusian airlines in response to the “state-sponsored hijacking” of the Ryanair flight carrying opposition blogger Roman Protasevich — and his subsequent arrest. With unclear details about the sequence of events, along with the reported presence of both Belarusian and Russian intelligence agents aboard the flight, a mix of unevidenced claims, misleading narratives and outright disinformation spread widely.

Belarus’s official version of events — read out in a letter purportedly from Hamas to Belarusian officials — is that the Palestinian militant group said a bomb onboard would be detonated unless the EU withdrew its support for Israel. The outlandish claim was swiftly denied by Hamas itself, which had several days prior agreed to a ceasefire with Israel. Some also pointed out the incongruity that a bomb threat for a flight between Athens and Vilnius, Lithuania would be sent to authorities in Belarus, which is not part of the EU.

As European nations scrambled to fast-track sanctions against the Belarusian government — Europe’s “last dictatorship” — Belarus’s state outlets ramped up disinformation about Protasevich and the opposition movement via online platforms such as Telegram. One false claim purporting Protasevich’s affiliation with Ukraine’s nationalistic Azov battalion, sourced to an anonymous Telegram channel known for spreading talking points favorable to authoritarian President Alexander Lukashenko, has been amplified through repetition in local media.

Meanwhile, a “confession” video featuring Protasevich was published on another anonymous pro-government Telegram channel and widely broadcast on state TV and affiliated social media channels. In the video, Protasevich — with what appear to be marks and bruises on his face — admits to “plotting riots” in Minsk, the Belarusian capital. Critics of Lukashenko expressed concerns that the video was filmed under duress. Belarus has a history of mistreating political prisoners, including torture and forced confessions. — Yevgeny Kuklychev