The information war over Cuba’s protests is escalating 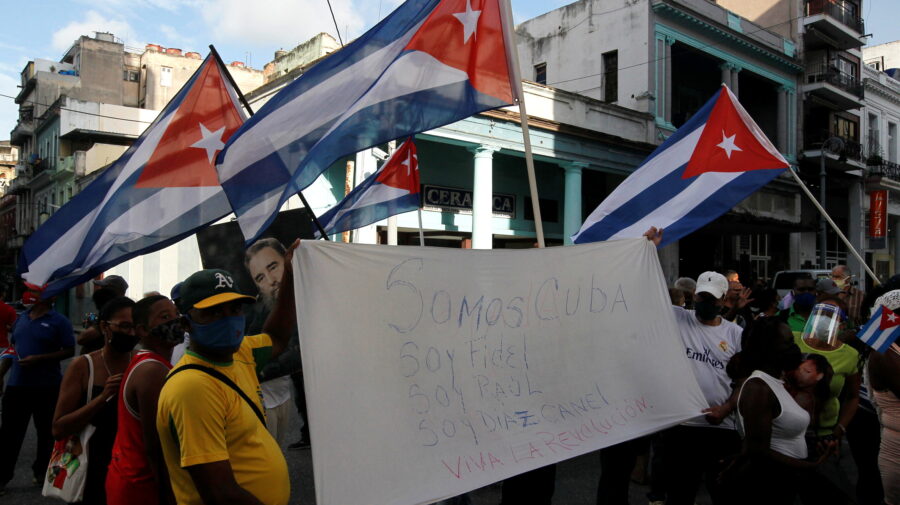 Government supporters react during protests against and in support of the government in Havana. (Reuters)

The information war over Cuba is escalating after mass protests broke out Sunday in San Antonio de los Baños and then spread throughout the country, prompting a crackdown from security services that included the reported arrest of at least 80 people.

A subsequent protest was held yesterday in Holguín, according to a video shared by pro-opposition Cuban journalist Yusnaby Pérez. US President Joe Biden praised Cuba’s demonstrators, calling the protests a “clarion call for freedom,” while Cuban President Miguel Díaz-Canel blamed the US embargo for the economic hardship that has been widely described as a cause of the protests.

Cuba has several broader conditions that are facilitating information disorder; the Committee to Protect Journalists in 2019 described it as one of the world’s “10 most censored countries,” while Human Rights Watch last month denounced a crackdown on artists and journalists there. State-linked groups have run afoul of social media platforms, including Twitter, for running pro-government propaganda operations. And in 2014, the US was also revealed to have been running a clandestine communications network — a program called ZunZuneo, dubbed a “Cuban Twitter” — aimed at fomenting dissent there.

In the wake of the protests, other forms of information disorder on display fit familiar patterns. For example, a tweet from an unverified user, shared at least 2,800 times, was falsely described as depicting a mass protest in Cuba. The video, which has at least 300,000 views, showed a recent soccer-related celebration in Buenos Aires, Argentina, as many replies noted. (First Draft’s Laura Garcia also highlighted a 2016 image from Barcelona, Spain, that was being recirculated by users claiming it depicted the Cuba protests.) The re-sharing of outdated, out-of-context videos was a key vector for disinformation in the US 2020 election and the escalation of violence earlier this year following Israel’s forced displacement of Palestinians in occupied east Jerusalem.

Meanwhile, the effort to tie the protests to US politics continued, with a number of mayors from the greater Miami area writing an open letter requesting a US “intervention” in Cuba. Miami became home to a large number of Cuban exiles who left after the 1959 communist revolution led by Fidel Castro. Legislators such as Representative Lauren Boebert of Colorado and Senator Marco Rubio of Florida issued statements demanding that the Biden administration denounce communism. Rubio also suggested in another post that the Venezuelan government’s arrest of a key opposition figure and its pursuit of opposition figure Juan Guaidó were “interrelated” to the protests in Cuba, a claim for which he did not provide direct evidence. — First Draft staff