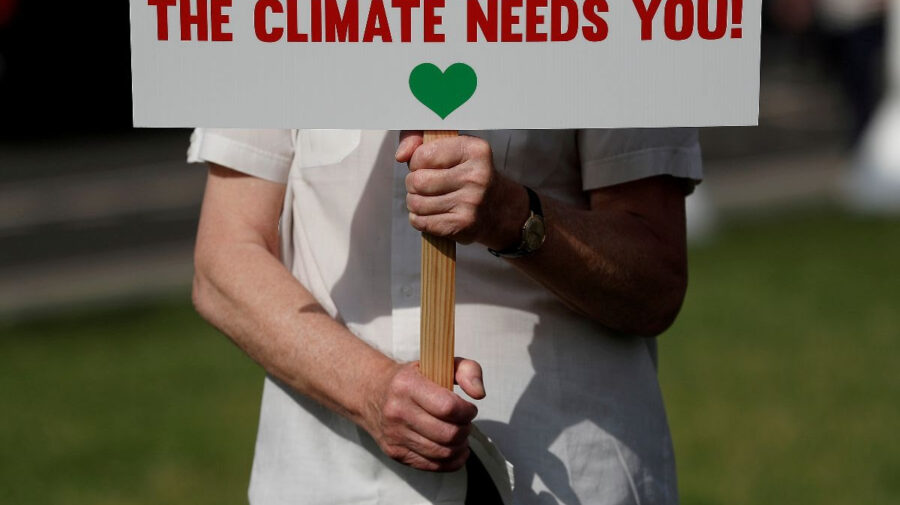 A protester from the Climate Coalition in London on July 23. (Reuters/Peter Nicholls)

Yesterday’s much-anticipated United Nations report once again made it clear that human activity was the “unequivocal” cause of climate change’s “unprecedented” scale. But the report, the first of three major climate evaluations that will be released over the coming year by the UN’s Intergovernmental Panel on Climate Change (IPCC), has stirred up climate science denialists who took to social media and spread misinformation.

Disclose.tv, a German-based outlet that often shares unreliable information through its popular Twitter, Telegram and other social media accounts, falsely suggested that climate change is merely a result of the natural climate cycle. The tweet, which included a dated and unrelated chart, purports to show that Earth’s temperatures are within historical highs. “If you zoom out, this is what happened in the last 500,000 years,” the tweet read in part. The post has since been retweeted at least 2,000 times and viewed at least 107,000 times on Telegram.

Others claimed that the IPCC has long made false and dire warnings about climate change. On Sky News this morning, Australian Senator Matt Canavan claimed that the IPCC has “been saying for 50 years that we’ve got 10 years to save the planet, and they’re constantly wrong.” (The IPCC was established 33 years ago, in 1988.) On Twitter, Canavan retweeted a post by Danish writer Bjorn Lomborg, who has written a number of controversial books about “climate alarmism” and “climate hysteria.” Lomborg’s thread was shared at least 1,900 times and promoted by climate science skeptic and industrial policy pundit Alex Epstein.

In one example, The Daily Wire, a digital outlet founded by right-wing influencer Ben Shapiro that regularly spreads falsehoods, published an article headlined “‘Pathetic, Dishonest, Virtue-Signaling Hypocrites’: Megyn Kelly Rips Climate Alarmists.” The article, which draws a connection between Kerry’s private jet and the IPCC report, has been shared on Facebook at least 2,000 times since it was published yesterday. — Keenan Chen, Stevie Zhang