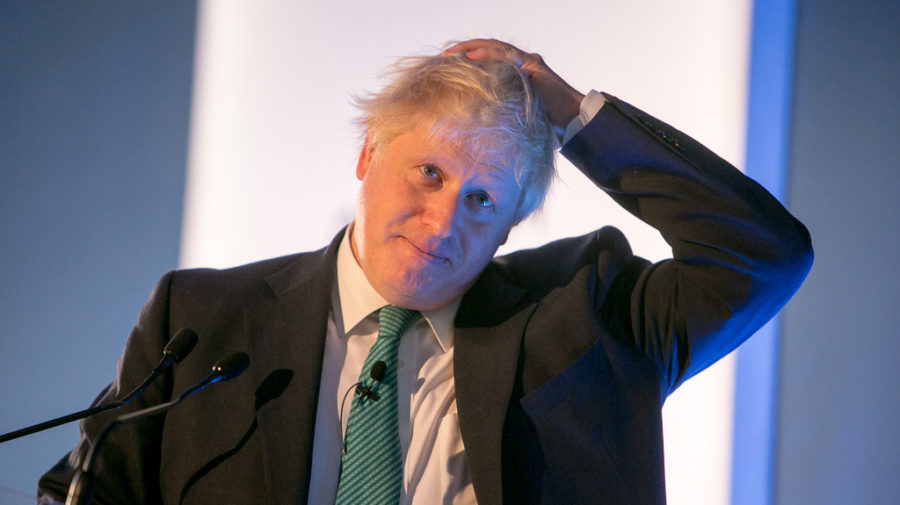 Conservative Party leader and Prime Minister Boris Johnson in 2017, when he was Foreign Secretary. Chatham House/Flickr. Some rights reserved. 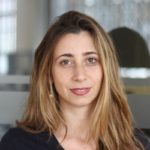 Almost all of the Conservative Party’s recent Facebook adverts promote claims labelled as misleading by one of the platform’s third-party fact-checking partners, a First Draft investigation has found.

According to the data available through the Facebook Ad Library API, nearly 90% of the ads posted in the first days of December push figures already challenged by Full Fact, the UK’s leading fact-checking organisation. The non-partisan, independent charity works with the tech giant to assess posts which have been reported as misleading or false by users in the UK.

However, Facebook recently announced that posts from political organisations and political adverts are exempt from fact-checking, meaning parties and candidates can promote inaccurate claims without scrutiny.

“But Full Fact continues to regularly scrutinise claims by all political parties, including manifestos and debates during this election campaign.”

Full Fact has published a wider analysis of Conservative and Labour Facebook ads during this election. 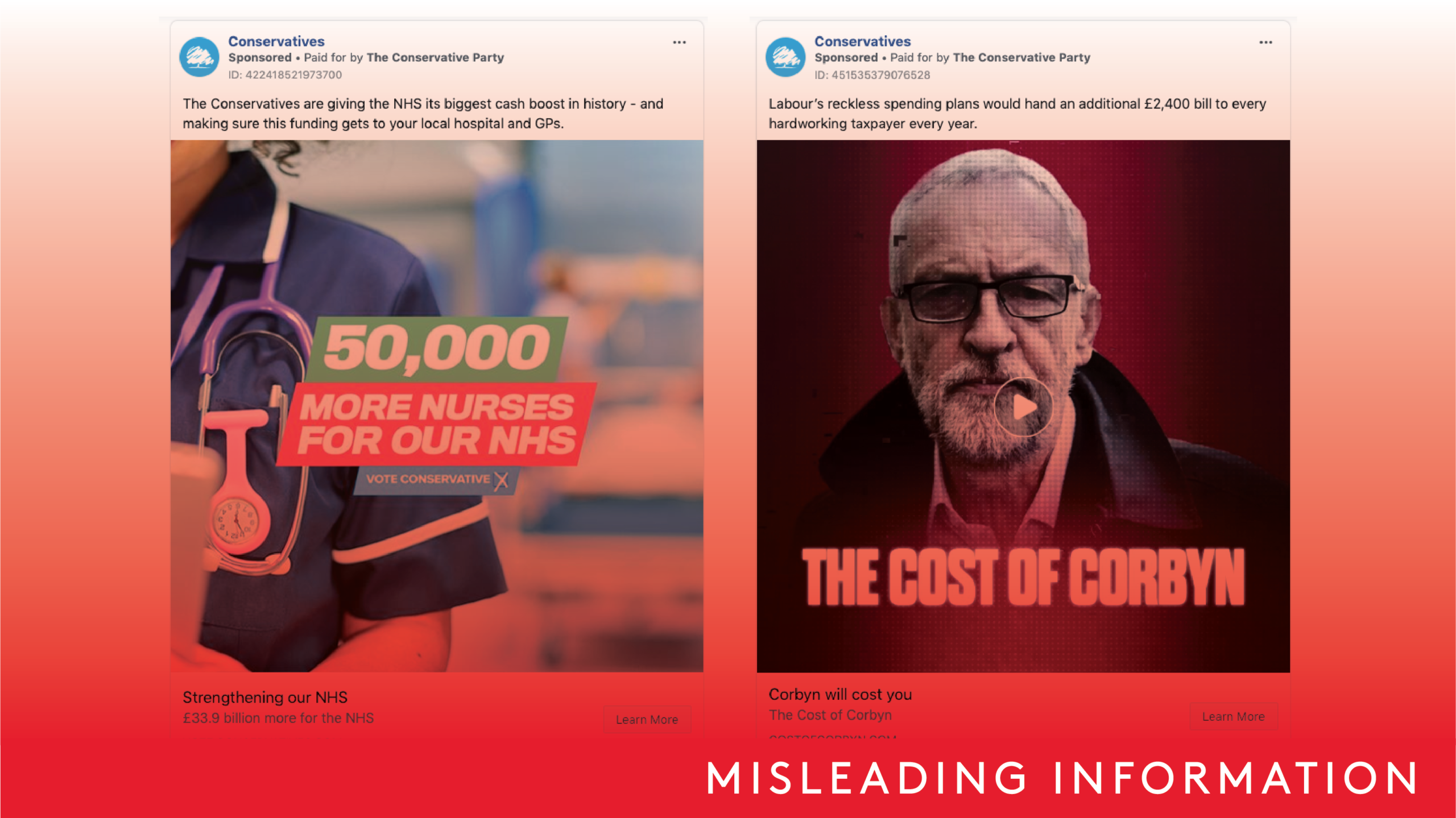 With 12 days until polling day, the Conservative Party massively stepped up its ad campaign on Facebook, running almost 7,000 ads and spending more than £50,000 between November 27 and December 3, according to the latest figures from Facebook’s Ad Library.

First Draft accessed the Facebook Ad Library API to download all 6,749 ads from the Conservative Party between December 1 and December 4. Some 88% (5,952) of the most widely promoted ads featured claims about the NHS, income tax cuts, and the Labour Party which had already been labelled misleading by Full Fact.

When ITV News asked senior Conservative Michael Gove about the ads, he said: “I’m not aware of any adverts that we publish that have been misleading.” 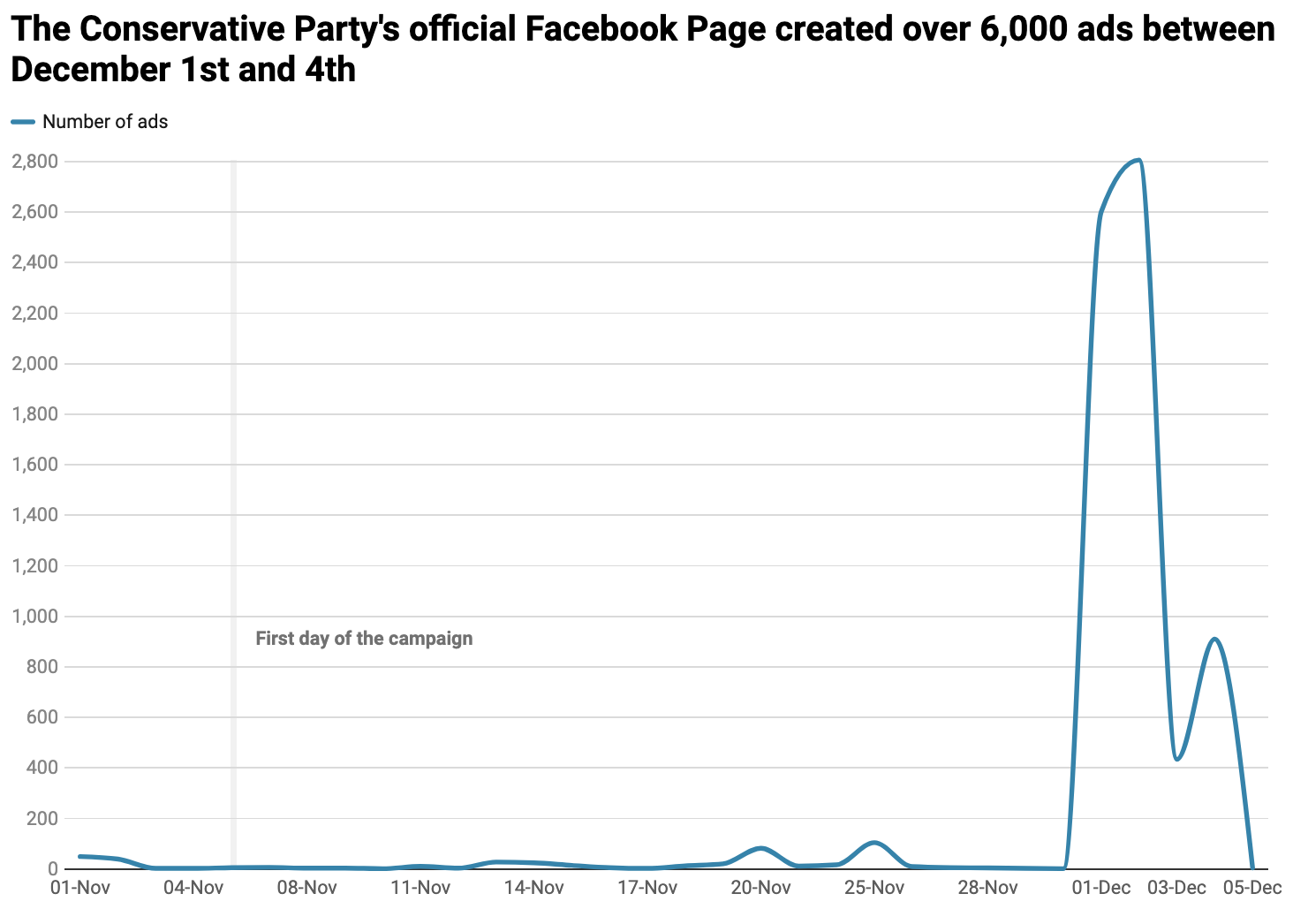 The Conservative Party stepped up their Facebook advertising campaign significantly in the last week of the election period.

The central Conservative Party press office have not responded to requests for comment.

A Facebook spokesperson told ITV News: “We don’t believe a private company like Facebook should censor politicians. Our approach is instead to introduce unprecedented levels of transparency so anyone can see every political advert and who it’s from.”

The misleading ads include:

Mr Moy said: “This election candidates and campaigns on all sides are asking voters for their trust. Serious parties and politicians should not be recycling debunked claims or targeting individuals with bad information – we all deserve better than that.”

The Liberal Democrats have also been accused of misleading voters ahead of polling day, using inaccurate graphs and leaflets masquerading as local newspapers.

The Lib Dems have also been accused of using misleading graphs in Facebook ads. First Draft found hundreds of Lib Dem Facebook ads use graphs to claim they are the only party to beat Labour, the Conservatives or the SNP “in seats like yours”.

Facebook does not provide data on where the ads have been targeted but some Twitter users have complained that they have received ads which are inaccurate for their constituency.

At the time we first conducted our analysis, First Draft was not able to find misleading claims in Facebook adverts from the Labour Party in the first days of December, when the Conservative Party stepped up their campaign.

Further analysis found that the data obtained from the Facebook Ad Library API between December 3 and 4 and used to examine Labour’s ads was incomplete. The reliability of Facebook’s Ad Library data was called into question when some 74,000 ads disappeared between December 9 and 10, according to POLITICO, but were reinstated after Facebook reportedly “fixed a bug”.

Based on Ad Library data accessed by First Draft on December 12, seven Labour Party ads from December 1 to 4 link to webpages which contain figures Full Fact says are “inaccurate” or “need more context”.

Four of the seven ads link to a web page claiming £8 billion has been lost from social care budgets since 2010. However, Full Fact points out that this figure relates to how much local councils said they have had to save in adult social care spending. The Full Fact analysis says “That’s money they had in previous budgets but had to make savings on, it’s not necessarily how much their budget has been reduced by”.

The data showed Labour posted 104 new ads in the early days of December, meaning 6.7% of their ads between December 1 to 4 promote claims labelled as misleading by Full Fact.

Since the publication of the article on December 6, all parties continued to serve new ads on Facebook, including dozens from Labour. On December 11, First Draft found six versions of two ads from Labour which promoted misleading claims, all published on December 10.

One ad claimed a Labour government would save households thousands in bills and the other claimed the Conservative Party had “cut 8 billion pounds from social care” since 2010. Both figures have been flagged as misleading by Full Fact. Labour’s Liz McInnes also used this claim in a Facebook ad.

Neither the Liberal Democrats nor Mrs McInnes responded to requests for comment.

Facebook adverts have been a central theme for commentators this general election, the first in the UK since the social media giant launched its Ad Library in 2018 following criticism that advertisers were ‘micro-targeting’ users based on their interests, fears or personal data. Other platforms also created transparency databases for online advertising, but not to the same extent.

Advertisers can target Facebook users with a wide range of details, including postcode, hobbies and private information, but these categories are not publicly viewable in the Ad Library.

Facebook founder and chief executive, Mark Zuckerberg, was criticised by US lawmakers in late October this year over his company’s policy not to fact check political ads.

More recently, Mr Zuckerberg told CBS: “What I believe is that in a democracy, it’s really important that people can see for themselves what politicians are saying, so they can make their own judgments,” he said.

“And, you know, I don’t think that a private company should be censoring politicians or news.”

A Facebook spokesperson added: “Voters, journalists and fact-checkers can scrutinise the claims being made by politicians and hold them to account.

“This doesn’t mean political parties and politicians can say whatever they want on Facebook.

“We don’t allow ads which share photos, videos and articles which have already been found on our platform to be false through our third-party fact-checking programme.

“We also take action on content that incites violence or uses misrepresentation to dissuade people from voting.”

Will Moy told First Draft: “Facebook have a responsibility for what happens on their platform.

“But it shouldn’t be left to US internet companies to safeguard UK elections. Our election laws are decades out of date, and our next Parliament should take urgent steps to secure the transparency we need to protect future votes.”

Our first analysis of the Labour ads was based on data we had exported from the Facebook Ad Library API as daily CSV files on December 1 through December 4. On December 12, we discovered the data covering the period between December 3 and 4 was missing values. That day, we re-scraped the data for ads published December 1 to 4 and conducted the same analysis on the resulting dataset. We found that seven out of 104 Labour ads (6.73%) linked to webpages containing claims deemed inaccurate or needing more context by Full Fact. We have updated our article to reflect this, and contacted Facebook for comment about the missing ads in the daily CSV files.

First Draft analysed Conservative Facebook ads using a single cumulative dataset for December 1 to 4, rather than daily CSV files, because of the large volume of ads. On December 12, we re-scraped and re-ran our analysis on the Conservative ads as well; the 88% figure remains accurate.

Additionally, we have added a link to Full Fact’s December 11 analysis of Labour and Conservative Facebook ads during this election campaign.

Update, December 11 2019: This article has been updated to show that the Labour Party published six versions of two ads on December 10 featuring claims labelled misleading by Full Fact.