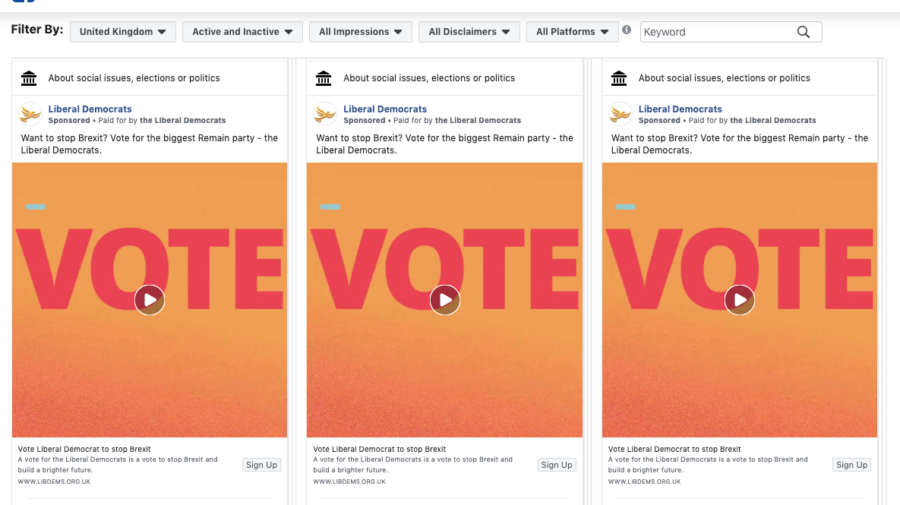 A sampling of the Liberal Democrats' 1,551 ads launched in the first week of the election. Screenshot by author.

From soft colour palettes to macho slogans, First Draft research has uncovered a range of strategies being used by political parties to target voters via Facebook, Google and Snapchat ads.

Between Nov 5 and 13, the parties veered between micro-targeting and a firehose approach on Facebook, Instagram, Google and Snapchat, according to First Draft analysis of the platforms’ ad libraries and API.

The new digital battleground for hearts and minds of voters is being waged through online ads where anyone can post a political missive faster, easier, and more directly than ever before.

Bypassing the traditional distribution lines of news orgs and broadcasters, the Ad Library gives an insight into the tactics the mainstream parties are deploying towards different parts of the population. First Draft will be documenting the sophisticated strategies and various wedge issues the parties address over the election campaign every Thursday.

The analysis shows that, in the first week, the Lib Dems ran some newly-created 1,551 advertisements over the first week, but the Conservatives were the biggest spenders over the period, pumping more than £50,000 into their 56 adverts.

The data shows Conservatives reached different demographics with different slogans and aesthetics, pitching ads about social services to women, in contrast to a ‘Get Brexit Done’ message aimed at men.

“You can already tell that the people the Conservatives have on board know what they’re doing,” said Tristan Hotham, a Bath University and Who Targets Me? researcher who focuses on UK political parties and the use of Facebook.

“They’re matching the content to the demographic, which they didn’t do in 2017.”

These tactics fall into what he describes as ‘super micro-targeting’.

“This is only just beginning,” Mr Hotham added.

The Brexit Party and Plaid Cymru’s ad messages also appear to be reaching targeted demographics, whereas Labour and the Liberal Democrats are running large amounts of ads with subtly different messages to find what resonates most with voters.

Here’s a breakdown of the ads the parties launched since the election period officially started last week, including Google and Snapchat ads.

The Conservatives have been the big spenders on Facebook over the course of the week, testing out different messages with a laser-guided focus on target demographics.

One ad running on Facebook and Instagram depicting Boris Johnson has exclusively reached male users under 34. With neon graphics and a rousing 80s soundtrack, its message is to back the party leader to ‘Get Brexit Done.’ 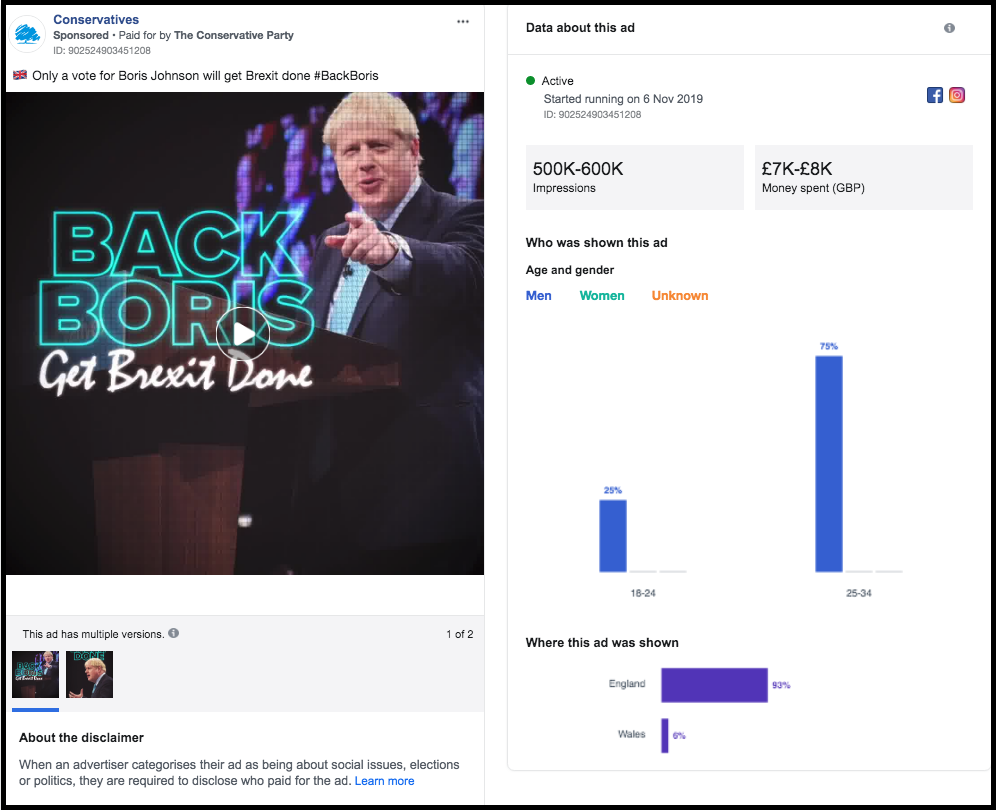 But a different version of the same ad has exclusively reached men and women over the age of 55 — this time with classical music and a softer colour palette.

As well as Brexit, it mentions the NHS, schools and safer streets, described in the ad as the ‘real issues’. 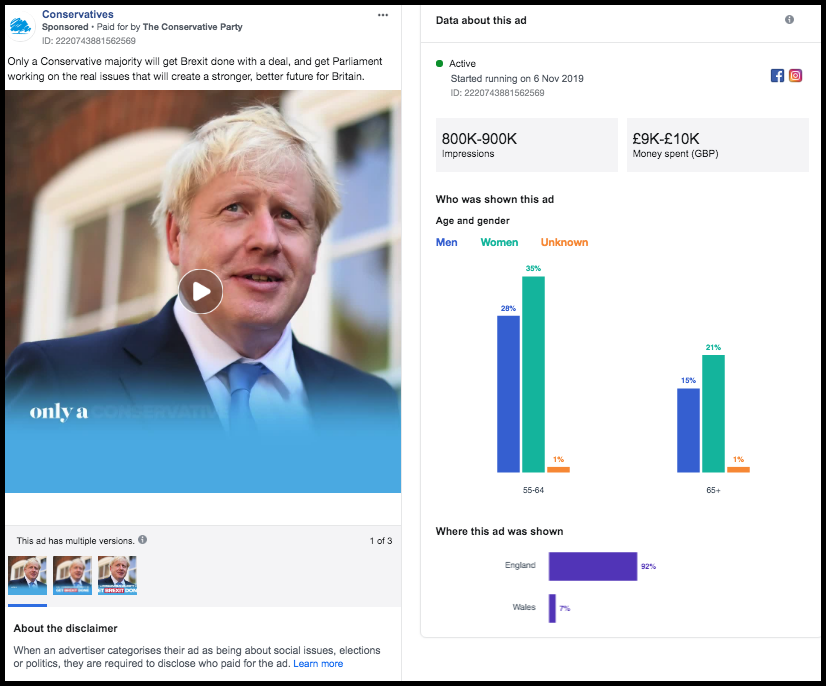 A Conservative Party ad aimed at people over 55. Screenshot by author.

In another case, similar ads with slightly different messaging reached voters depending on their gender.

Although the pictures are identical, the wording is different: one ad mentioning the NHS, schools and police is exclusively targeted at women, whereas the ad pledging to ‘get Brexit done’ is aimed at men. 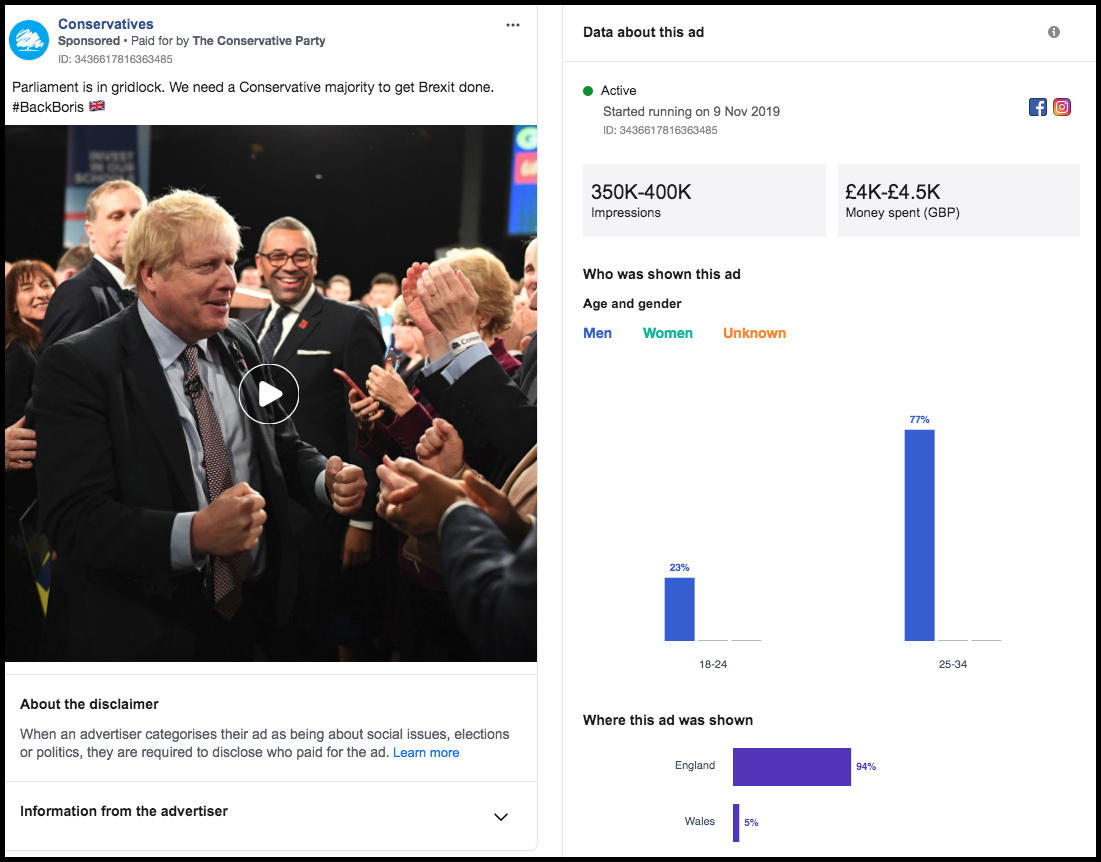 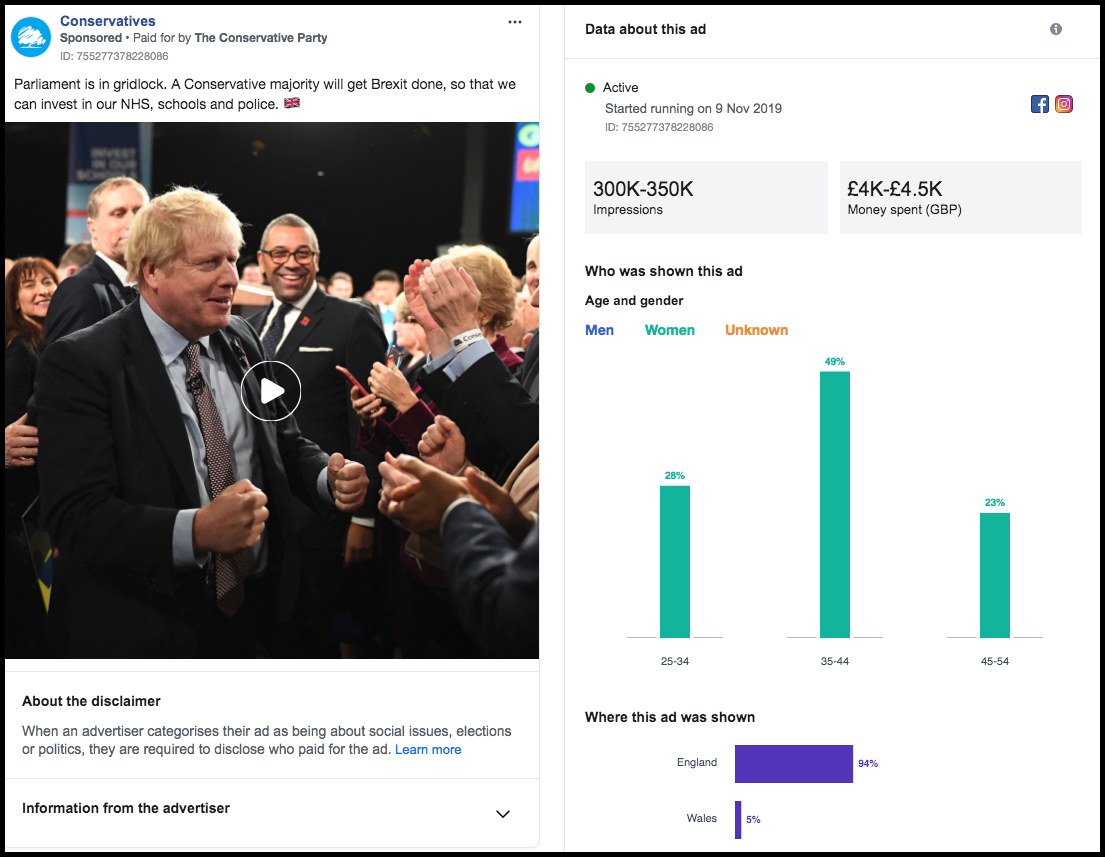 Other Conservative Party ads disproportionately targets male users, with the exception of the last age bracket of 65 and over where men and women are more equally split.

The ads focus heavily on voters in England, with a small proportion reaching users in Wales. They do not appear to be reaching any voters in Scotland or Northern Ireland.

Topics include: Ian Austin’s comments about Jeremy Corbyn, the SNP’s wish to enter into coalition with Labour in exchange for a Scottish independence referendum, and attacks on Labour.

Like the Conservatives, the Brexit Party’s ads are reaching targeted demographics.

Their ads disproportionately focus on men over 45, and some ads are only reaching male users in certain age brackets. None of the 21 versions of this ad reached any women under the age of 34. 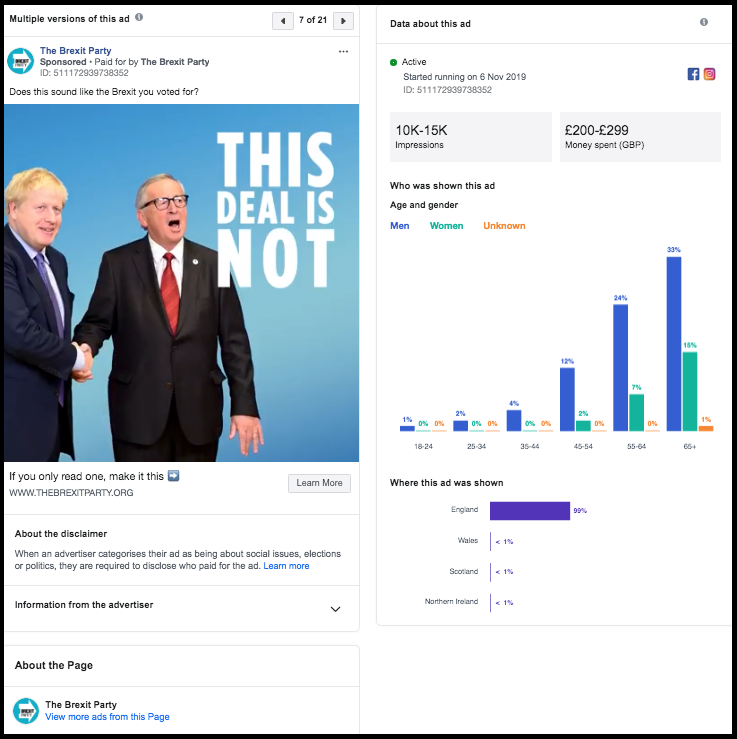 A Brexit Party ad that didn’t reach any women under 34. Screenshot by author.

Brexit Party ads are largely focused on local campaign events and hinge on the figurehead of Nigel Farage as the main attraction.

Employing different tactics to the previous two parties, Labour is running dozens of versions of similar ads, with very small variations in messaging. 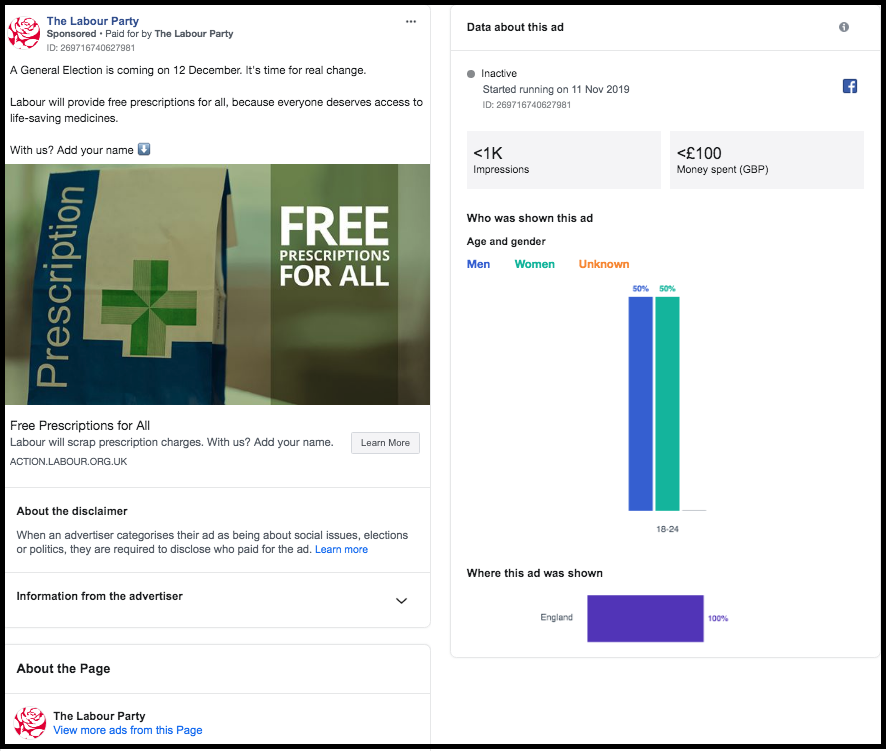 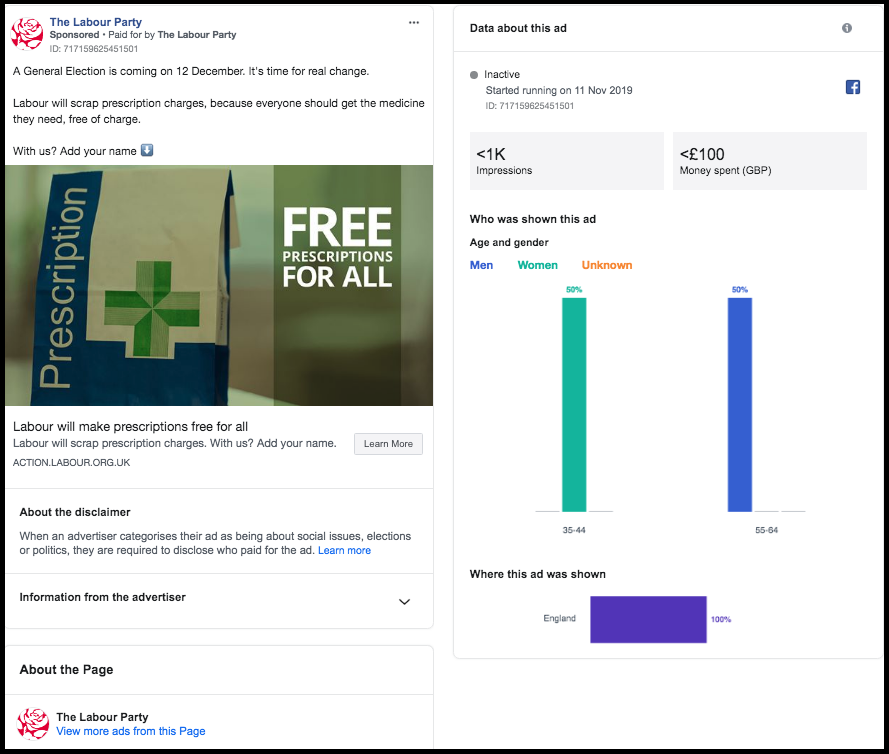 There may well be other factors influencing why these ads have reached these demographics, like Page likes, or postcodes.

The Facebook Ad Library for the UK only provides demographic information about age, gender and country (England, Scotland, Wales and Northern Ireland). This means that no-one except the advertiser and the individual knows the granular details of why someone has been targeted. However, in other countries, such as the US, the library is segmented by state and in France by province.

The campaign group Who Targets Me? provides a browser extension which allows individual Facebook users to find out who is targeting them in more detail.

Topics include: Brexit plan, free prescriptions, encouraging people to vote, and their position as the main challenger to the Conservatives.

Like Labour and the Conservatives, the Liberal Democrats are honing their messaging by promoting different ads with subtle variations in colours and content. For instance, the Observer and Who Targets Me? found that several different photos of Jo Swinson were being trialled in the lead-up to the election announcement.

Then, on November 9, the Liberal Democrats launched a large number of near-identical ads that are reaching different demographics. According to First Draft analysis, over the first week, they launched 10 times as many ads as the party with the next-highest number, Labour. In theory, this will give Jo Swinson’s party swathes of data to monitor who is responding best to their message. 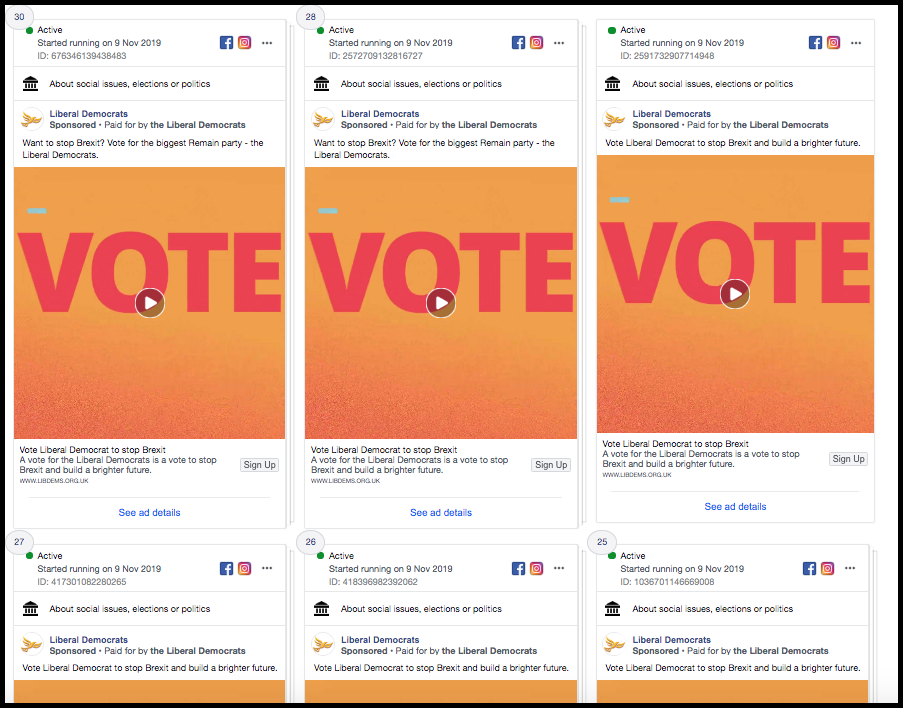 A sampling of the hundreds of Lib Dem ads launched in the first week of the election. Screenshot by author.

Topics include: Halting Brexit, with emphasis on the ‘remain bonus’ announced by Swinson this week, climate change, mental health, and the Lib Dems’ economic and social policies.

The Welsh party’s messages about free social care and increased policing are reaching older voters, whereas ads for younger users generally focus on their campaign to remain in the EU. 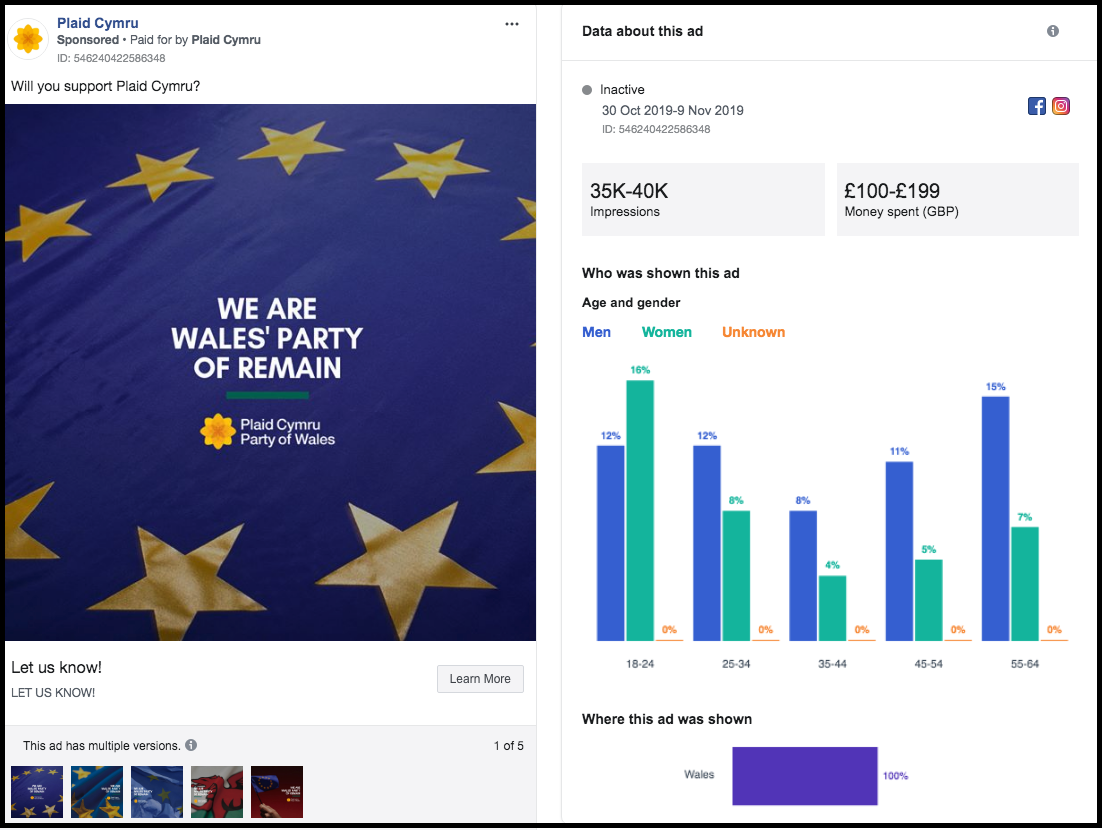 A Plaid Cymru ad invoking their position on Brexit that reached younger voters. Screenshot by author. 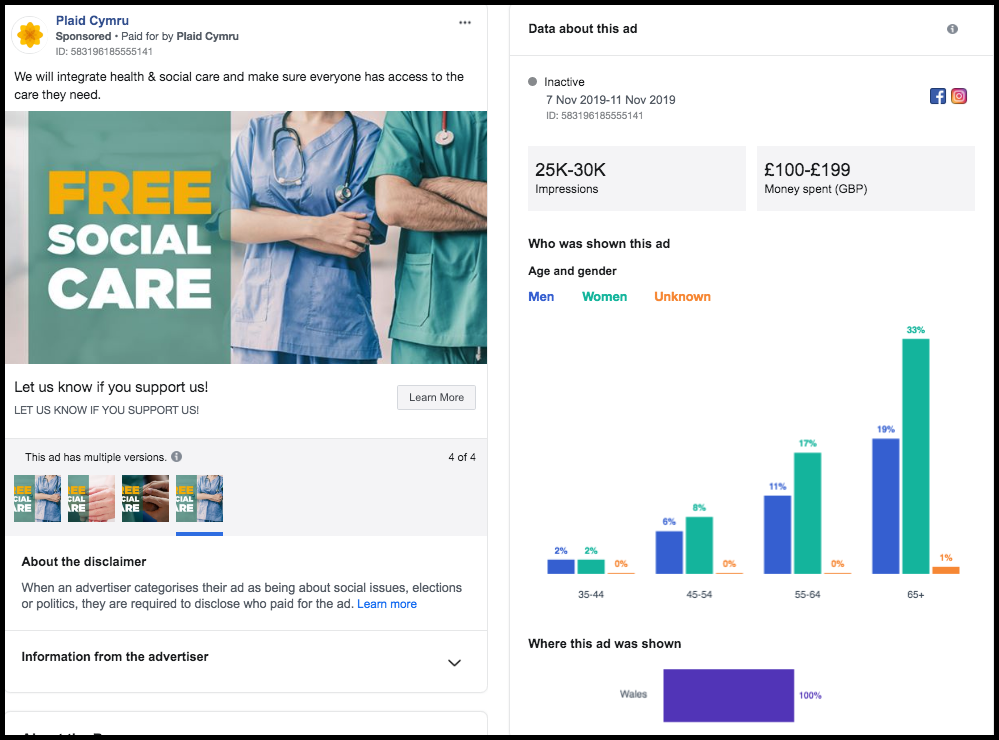 Topics include: Remaining in the EU, social care, police, the EU election results, Plaid as the only party that represents Wales.

Tom Davenport, a digital marketing specialist and former writer for Wired and Gizmodo, explained how the political parties reach target voters on Facebook and Facebook-owned Instagram.

“Two things are probably happening here: they’re focusing on specific groups [of the population] and then Facebook is amplifying it to the groups that react most,” he said.

Women aged over 35 may have responded well to a certain message from a particular party in the past, for example, so they might choose to target them with more messages in the same vein in new campaigns.

Alternatively, a certain demographic may respond particularly well to a generic campaign, which could lead Facebook’s intelligent AI to increase the delivery to that segment.

“It’s a little bit of both, and could make a feedback loop that makes messaging more extreme,” said Mr Davenport. “The advertiser might ramp up their strategy to serve a noisy minority on the fringes. When divisive messages get all the engagement, a political advertiser might lose perspective on what most people really care about.”

The library often does not show any visuals contained in adverts. 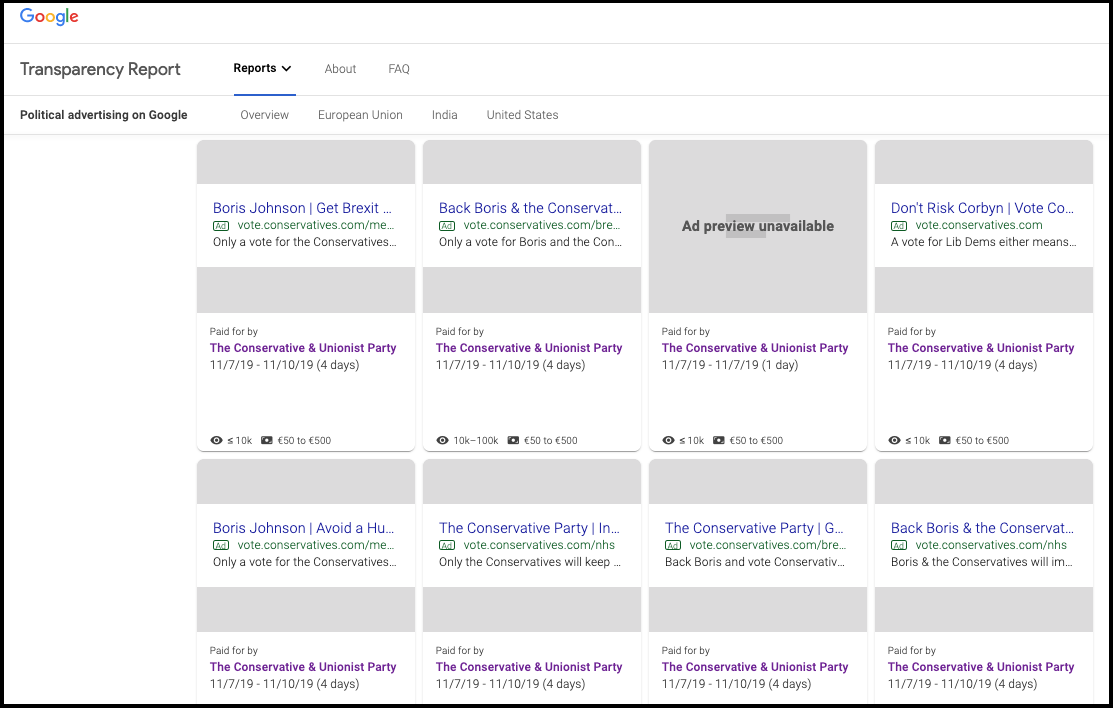 A sampling of the Google ads launched by Conservatives in the first week of the election. Screenshot by author.

The Conservatives appear to have 30 ads running testing various messages urging viewers to “Back Boris & The Conservatives” to “Get Brexit Done”, “avoid a hung parliament”, invest in the NHS or make streets safer.

Labour’s messaging on Google ads also takes in a range of approaches,  In particular, they appear to have reached millions of people with two videos ads on YouTube urging “real change” by voting Labour. Other ads promote Labour’s policy of holding a second referendum on a final Brexit deal or claiming the electorate may “Vote Lib Dem get Boris Johnson”. 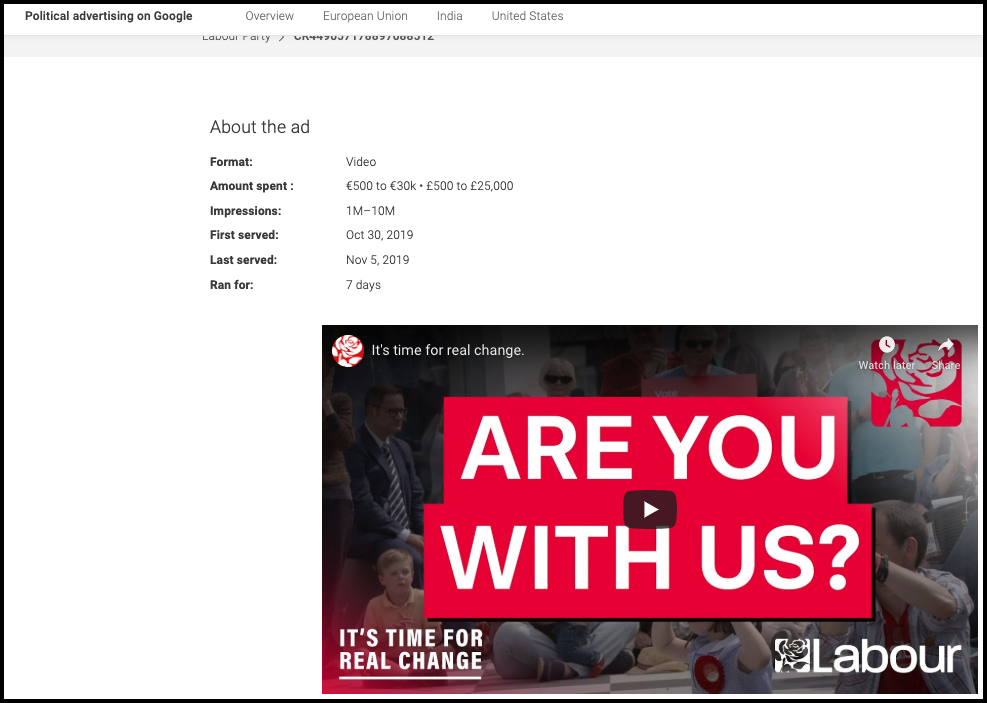 A Labour Party ad launched on Google. Screenshot by author.

The only other party advertising on Google over the period were the Brexit Party. The newly created group ran 12 ads with the message ‘Why we need a Clean-Break | Boris’ Deal is not Brexit’, as well as an ad titled ‘the Brexit Party | www.borisbrexitdeal.com’, which linked to a page where Nigel Farage lambasted Johnson’s Deal for not being ‘a proper Brexit’.

However, only Labour’s ads appeared in Google’s political ad transparency report at the time.

Google told First Draft that the library is updated every seven days. Facebook ads are updated daily but aggregate measures such as weekly spending and impressions are backdated. The Conservatives’ ads are now visible in the report.

However, this example is a timely reminder that Google Ads are worth keeping an eye on, as well as those on Facebook and Instagram.

The Conservatives and Labour are also running a limited amount of Snapchat ads.

Labour’s only other ad invokes the party’s position on Brexit: ”Only Labour will give people the final say on Brexit”. It’s currently at over 2 million impressions and due to run until Monday. 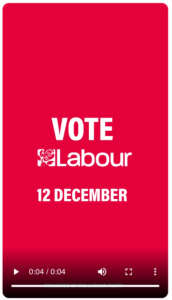 Labour’s Snapchat ad garnering the most impressions. Screenshot by author. 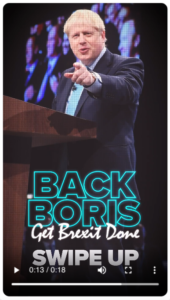 The Conservatives’ Snapchat ad garnering the most impressions. Screenshot by author.

The Conservatives launched six ads on Nov 11: generic versions of the Conservatives’ current messaging, due to run until December 12. The highest performing ad is a version of the 80s-soundtracked ‘Get Brexit Done’ video, at just over half a million impressions.

However, ‘impressions’ only refer to how many times the ad has been opened. As such, the same ad could have been seen by the same people hundreds of times – the ad library gives no extra detail about this type of information. The other main parties are not currently running any Snapchat ads.