UK Election: The main parties embrace a local digital strategy to win over voters
First Draft uses cookies to distinguish you from other users of our website. They allow us to recognise users over multiple visits, and to collect basic data about your use of the website. Cookies help us provide you with a good experience when you browse our website and also allows us to improve our site. Check our cookie policy to read more. Cookie Policy. 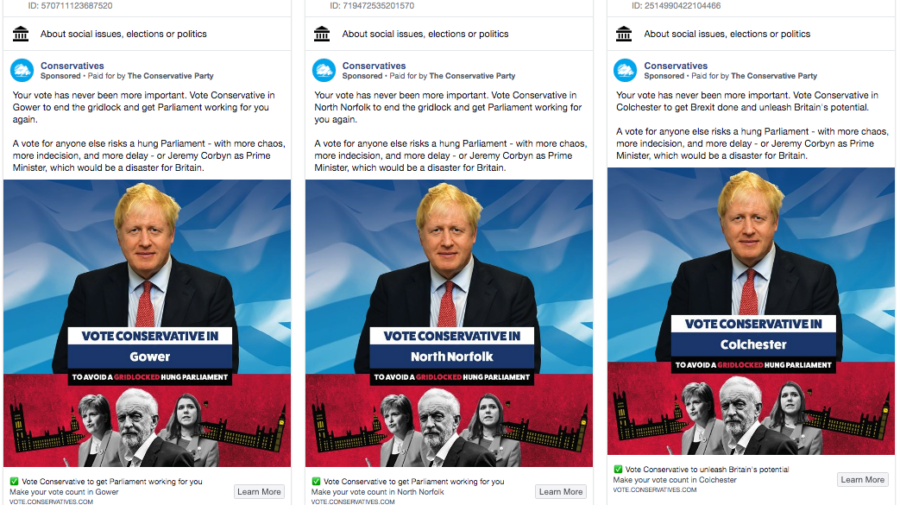 This was the week in which the UK general election, on the national stage at least, cranked up through the gears. Boris Johnson and Jeremy Corbyn went toe-to-toe in the first televised debate – but First Draft analysis of Facebook’s Ad Library shows the parties have been increasingly pivoting towards a local focus.

Data from Facebook’s Ad Library has revealed stark contrasts in the platform’s advertising ecosystem. Some of the parties have opted to do most of the legwork from their central accounts to get their message to local voters, while other parties have had their campaigns bolstered by local activists and grassroots organisations sharing dozens of ads.

Since the beginning of the campaign on November 6, over 800 ads have been launched by local Labour and Green Party activists alone. Some shared the parties’ broad policies, while others have had a distinctly hyper-local feel.

Schools, a hospital and even a wind farm project have featured in ads launched by local parties since the election started.

The central party pages for the Conservatives and the Brexit Party also embraced local politics by targeting constituencies directly by name in their own ads, coupled with tailored content depending on the political leanings of the area.

“Peterborough, we need to STOP the Remainer Alliance!” reads one Brexit Party ad. Another declares: “Wrexham, let’s tip the balance towards a real Brexit!”

There may well be other factors influencing why these groups were targeted, like Page likes, or postcodes – but only the advertiser and the individual can see that information.

The Facebook Ad Library for the UK only provides demographic information about age, gender and country.

First Draft gathered data from Facebook pages that had the names of the political body – such as the Liberal Democrats – in their title. Individual candidates, unaffiliated pages and any other false positives were then removed.

Local candidates must report all spending which takes place during the election period, including online ads which promote them.

Read on for a breakdown of the ads launched since the election period started, as well as a word on Google and Snapchat, after they admitted to releasing faulty data to their political advertising libraries.

From the Isle of Wight on the south coast to Scotland in the north, local Labour parties are turning to social media ads to get their message out to voters.

The central Labour Party greatly benefited from the support of local parties – with 779 ads launched from different regional groups since the election period began, compared to just 297 from the main party account.

These exact ads were repeated in other constituencies: Labour North West ran 15 ads using the same templates, while the East Midlands Labour page ran 21. First Draft contacted these local parties for comment to ask if they coordinated their ad messaging.

Other pages, by contrast, launched ads that highlight the local candidates and local ‘parish-pump’ style issues.

The Eastleigh Labour Party page is running several ads that promote the local Labour candidate for the area, Sam Jordan, often mentioning him by his first name in ads that promote local issues – like waiting times for appointments at local GP surgeries. 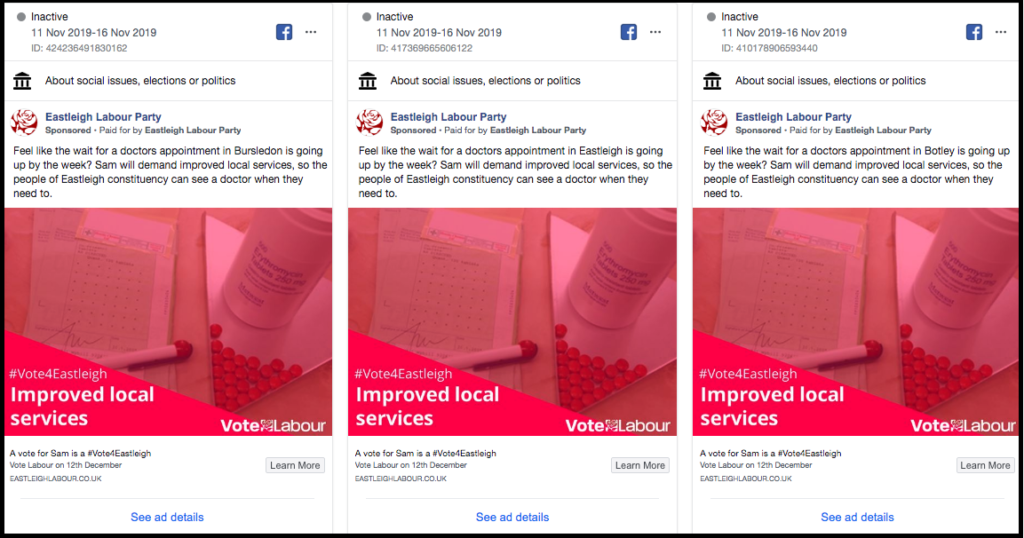 A Labour campaigner told First Draft that voters in his Scottish constituency have been turned off by the endless debate around Brexit and were responding to community issues on the doorstep .

“Local people tend to find local issues more appealing to them,” said Craig Finlay, the vice-chair of the Perth and Kinross Labour Party.

“If you knock on someone’s door, they want to tell you about a pothole in the road,” he said. “Big issues are a big turn off – especially Brexit.”

Like Labour, the Green Party’s message has been boosted and disseminated by local parties and campaigners. Local parties launched 98 ads, compared to 42 from the Green Party page itself. These numbers may be small but they represent a concerted effort to push their message of fighting austerity and climate change in the target constituencies.

The Mid Suffolk Green Party launched two ads that mention different schools in the area, claiming they suffered from cuts under the Conservatives — a figure from the National Education Union. 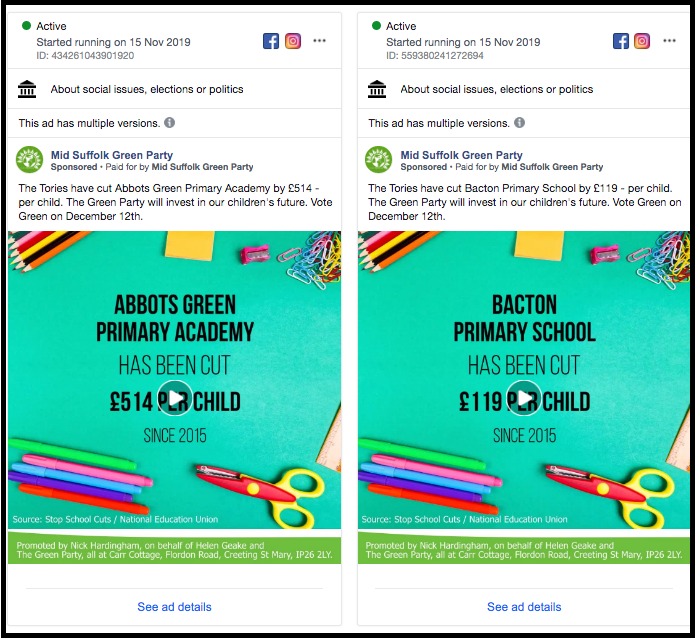 And one ad for the Dorset Green Party contains a ‘pledge to local voters’ to revive a wind farm project, among other topics. 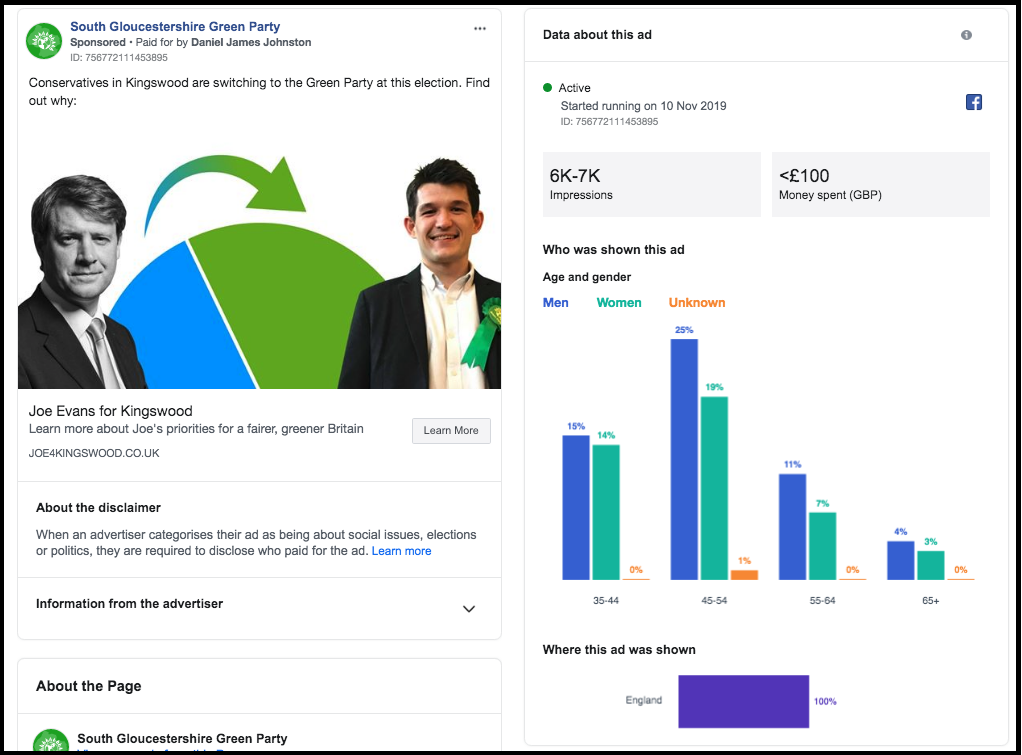 As well as these, the Green Party’s main page launched their first batch of ads since the election period started. They released dozens of advertisements with generic messaging about their policies which appear to be testing different messages to see what resonates with the electorate.

The Conservatives employed a different strategy. Its main account has launched 115 ads since Nov 6, compared to just 70 ads from local pages.

But the adverts have an increasingly local feel: the national party page launched dozens of ads directly addressing voters in specific constituencies.

Shifting their strategy from micro-targeted messaging and aesthetics, as First Draft reported last week, the Conservatives’ ads now call on voters from Colchester to Gower with the same message: “Your vote has never been more important.” 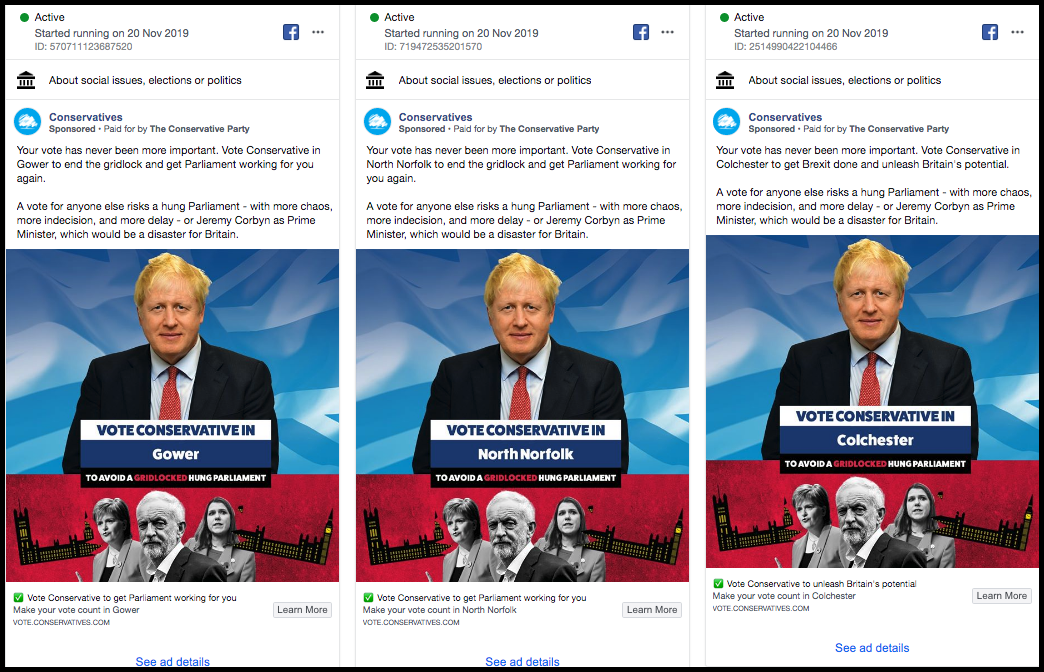 They emphasise the prospect of another “gridlocked parliament” as motivation to give the Conservatives a majority.

There are slight differences in the text: the ads targeted at majority ‘Leave’ constituencies make reference to the party’s policy on Brexit, like in Rother Valley (66.72% Leave), whereas ads targeting Remain constituencies leave Brexit out entirely, like St Albans (62.17% Remain).

There are a few exceptions. The ad targeting Worcester (53.68% Leave) doesn’t mention Brexit either, suggesting that there might be other factors at play affecting the audience targeted by the ad.

The Brexit Party has been mirroring the Conservatives’ strategy of targeting individual seats but doing so at scale, running hundreds of ads invoking specific constituencies by name.

Depending on the constituency, the Brexit Party messaging varies between ‘Stopping Corbyn’s Labour’ and ‘Stopping the Remain Alliance’, paired with a strong stance on delivering Brexit. 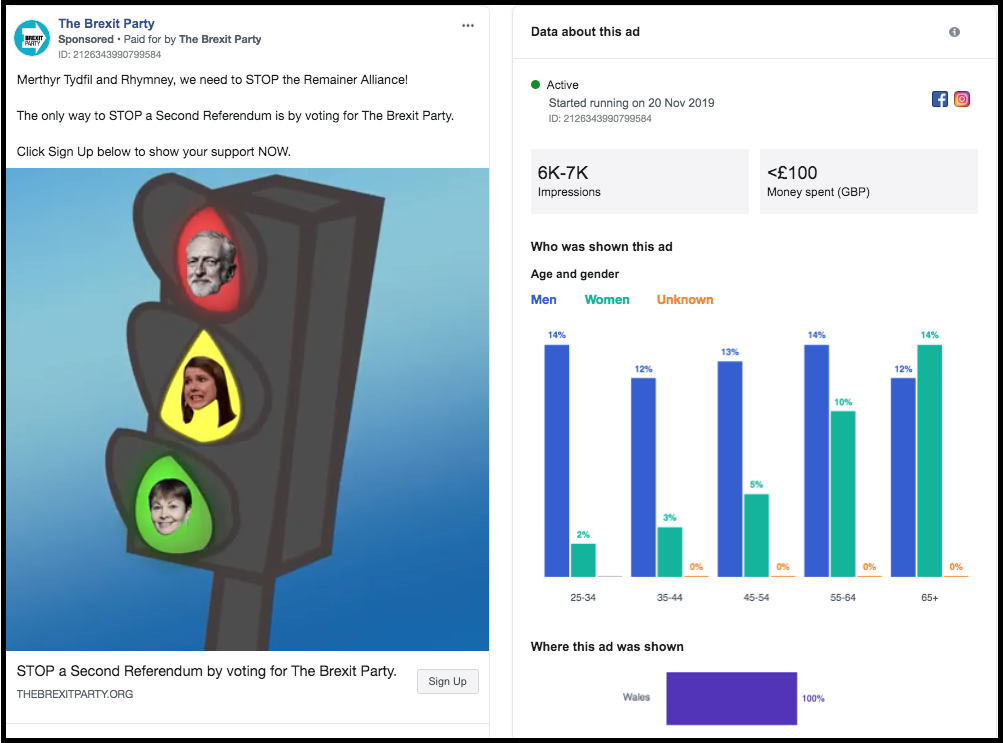 The party claim they will ‘tip the balance towards a real Brexit’, targeting Leave voters in areas that traditionally would not vote for the Conservatives.

This focused strategy suggests they are hyper-aware of their role at a local level — reflecting these tactics in their digital campaigns.

The Lib Dems had the second-highest number of ads launched from local party pages – but these ads were vastly outnumbered by the main party’s own political adverts.

As First Draft reported last week, the Lib Dems are still using a firehose approach to advertising on social media: pushing out thousands of ads to gather data about what messages resonate best with the electorate.

However, this week showed that they are starting to whittle down their messages to specific areas, launching dozens of new ads on Sunday that appear to be targeted at individual constituencies. 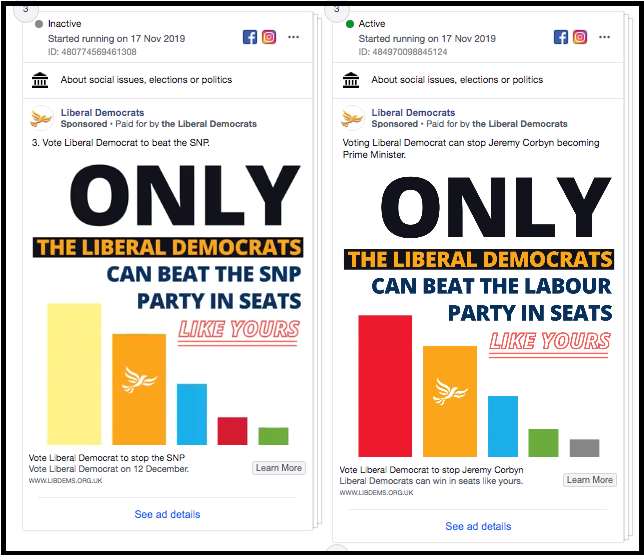 They all feature a video with a bar chart either showing the Conservatives or Labour in the lead, with the message that only the Lib Dems can beat the biggest party in “seats like yours.”

Based on the wording, these are likely to be targeted at specific constituencies – but the Facebook Ad Library only gives targeting information at the country level.

The party also released a new batch of ads on Facebook and Instagram targeting voters in Scotland. This time, their message focused on preventing a second independence referendum – indicating an awareness of how location can shape their advertising. 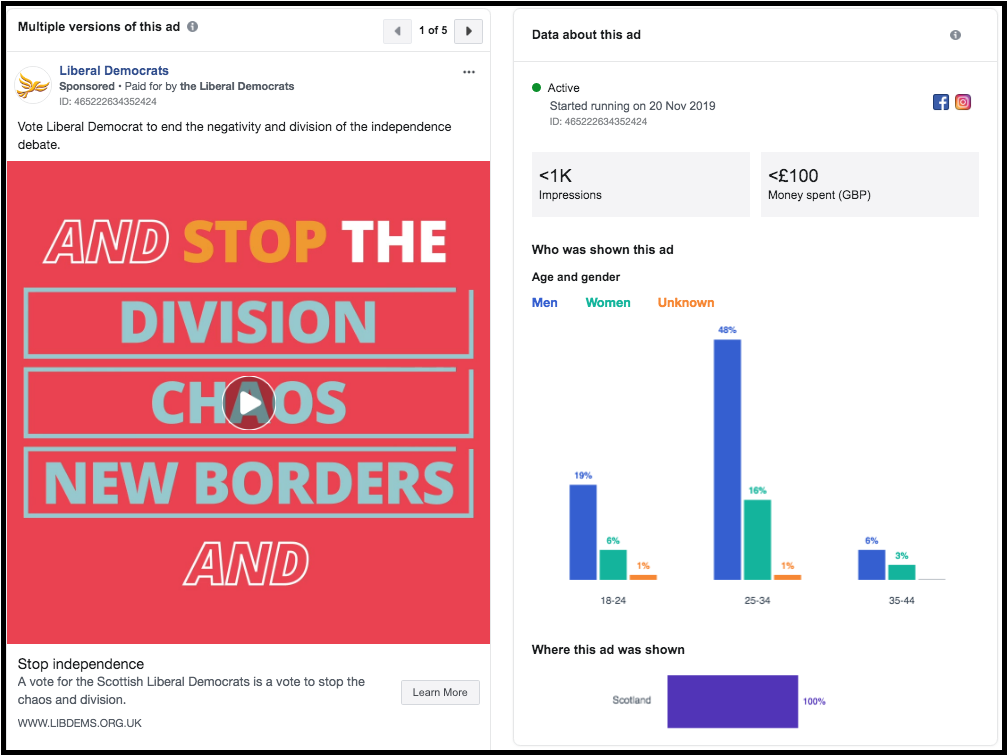 Both Google and Snapchat, which First Draft featured in last week’s ad round-up, have come under fire this week for releasing inaccurate data to the respective political advertising libraries.

According to research by the Guardian, Google’s ad library underestimated the political parties’ spend on ads, in one case by a factor of a thousand.

The discrepancies were noted by the tech giant, who told the Guardian that it would fix the errors “as soon as possible.”

Snapchat was also found to have published inaccurate data to its ad library this week, suggesting that the Conservatives were targeting Boris Johnson’s Uxbridge seat – when in fact the opposite was true.

The error was fixed, but not before some researchers and media outlets had published articles using the incorrect data.

“You sort of just trust that these multi-million pound social media giants, if they’re going to publish data, it will be accurate,” said Tristan Hotham, a Bath University and Who Targets Me? researcher who focuses on UK political parties and the use of Facebook.

“Everything feels like it’s built on sand, and that’s not how we want to run our elections.

“If you’re going to [publish data] you’ve got to make sure it’s correct.”

In addition, bugs in the Facebook Ad Library API meant First Draft was unable to access any data for November 20 and 21. First Draft researchers are currently looking into the issue.