Misleading narratives around who is responsible for US vaccine misinformation 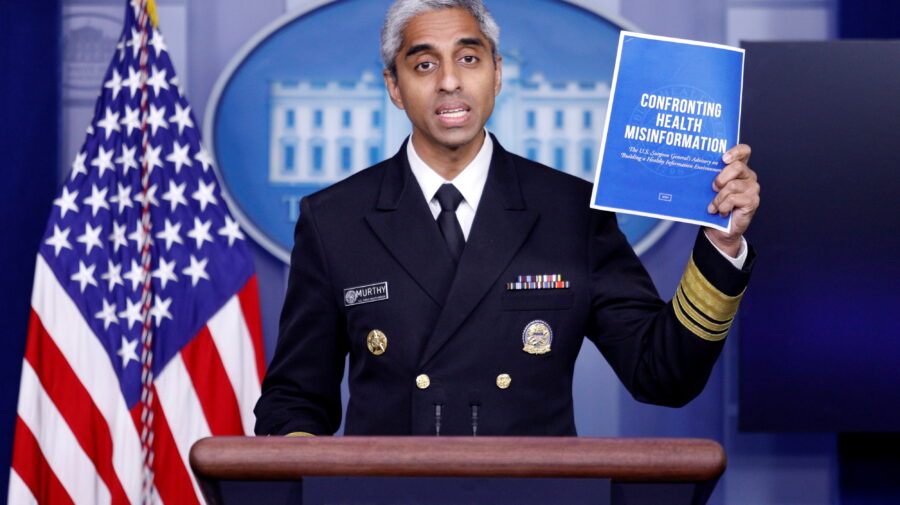 Covid-19 cases are rising in every US state, driven both by lagging vaccine uptake and the highly contagious Delta variant. Amid this context, the White House is looking to confront the misinformation that fuels vaccination hesitancy. Last week, President Joe Biden said misinformation on social media is “killing people” (a claim Facebook shot back at in its “Moving Past the Finger Pointing” blog) and Surgeon General Vivek Murthy called health misinformation “a serious threat to public health” in a new report that cited First Draft’s research.

There is strong evidence that the latest Covid-19 surge is concentrated in pockets of low vaccination. But promoters of vaccine misinformation are advancing a counter-narrative that suggests the Biden administration is to blame. The narrative draws on a misreading of past remarks made by Biden and Vice President Kamala Harris, who both said before the 2020 US election that they would trust health experts over then-President Donald Trump as reliable sources on vaccine safety. They also expressed concerns that Trump was pressuring health officials to approve vaccines early ahead of the election.

Absent such context, a video mashup of past Biden and Harris vaccine comments was posted to Twitter on June 24 by a Republican National Committee Twitter account. The video now has at least 758,000 views. The video has been reshared and amplified amid the latest White House messaging push for Americans to get vaccinated. Those who shared the video include an unverified RNC staffer, whose July 16 post was retweeted at least 5,000 times, and commentator Mike Cernovich, who wrote on July 18, “If Trump were POTUS, Democrats would NOT be taking the vaccine.”

The partisan narrative that Biden and Harris promoted vaccine skepticism ignores the context of their consistent messaging in support of health experts amid Trump’s political pressure and Biden and Harris’s advocacy for mass vaccination after taking office. Their messaging was and is in line with the advice of institutions such as the Centers for Disease Control and Prevention.

The partisan dimension of the debate over vaccines became more apparent following a July 18 statement from Trump — who was quietly vaccinated in January — that read in part, “people are refusing to take the vaccine because they don’t trust [Biden’s administration]” or the results of the 2020 US election. Trump’s statement is a reminder of the thematic overlap between the stolen-election myth and vaccine misinformation.

Another sign of the political dimensions to vaccine misinformation came over the weekend after five Texas House Democrats tested positive for Covid-19. In a bid to disrupt efforts by their Republican colleagues to pass voting laws that experts say have links to disinformation, a group of Democrats had left Texas for Washington, D.C., and met with Harris. Harris’s spokesperson said on July 17 that two of the legislators present at that meeting later tested positive for Covid-19, but that Harris did not need testing or quarantine because she was not in close contact with them. Reports that at least three of the five legislators were fully vaccinated were used by promoters of vaccine misinformation to sow doubt about the efficacy of Covid-19 vaccines, despite the fact that some “breakthrough” virus cases are expected.

The White House cited a May report from the Center for Countering Digital Hate called “The Disinformation Dozen” in its push against vaccine misinformation. The report found that 12 individuals, with a combined social media following of 59 million people, were behind up to 65 per cent of the anti-vaccine content that the nonprofit had looked at. — First Draft staff