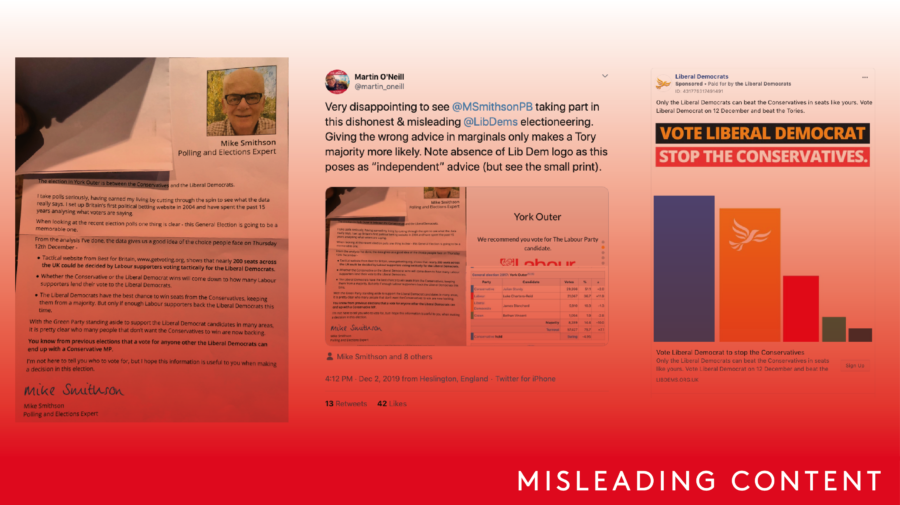 The Liberal Democrats have been accused of using misleading literature and Facebook ads to falsely claim that the party is closest to defeating Labour or the Conservatives in certain election constituencies.

Letters claiming to be from an “elections and polling expert” – and separate online ads featuring misleading graphs – have been widely criticised by voters on Twitter who say the recommendations and illustrations do not accurately reflect the situation on the ground.

First Draft found at least 45 Twitter users who reported receiving letters from Mike Smithson across 33 constituencies. Mr Smithson, whose image is found in the top right-hand corner of each leaflet, is a former Lib Dem councillor and parliamentary candidate who runs a political betting website.

However, there is no reference to his history with the party or Lib Dem branding on the letter. Only the fine print at the bottom of the letter reveals they were distributed by “M. Dixon (the Lib Dems’ CEO) on behalf of the Liberal Democrats”.

Mr Smithson referred to the letters in an article on his website on December 2, writing: “I should explain that while I approved the text of the letters I did not have a prior view of the list of constituencies they were going to.”

Many letters say their information is accurate as per “tactical voting website from Best for Britain, www.getvoting.org”. First Draft research found getvoting.org – which supports Britain remaining in the EU – only recommends tactically voting for the Liberal Democrats in 17 of these constituencies.

Martin O’Neill, an author and senior lecturer at the University of York, told First Draft he had received the letter in the York Outer constituency. He described the literature as “dishonest” and called it a “shameful and counterproductive tactic”.

“I think it’s terrible that the Lib Dems would rather try to get votes by trickery rather than by strength of argument. This so-called ‘independent’ letter was a new low.”

Mr Smithson added that the letters were “put into the Royal Mail system near the start of the election campaign where the post European election result dominated the most recent polling landscape. Since that time of course the YouGov MRP poll and other events have moved the needle”.

In a response to a user tweeting an image of the letter, Mr Smithson replied in a tweet on December 5 that “the mailings were not approved by me”.

Mr Smithson has not replied to repeated requests from First Draft for comment.

Another recipient of the letter, who wished to remain anonymous, told First Draft that they received the letter in the constituency of Altrincham and Sale West. The letter said the Lib Dems stood a chance of winning this seat. According to YouGov’s 2019 voting intention poll, they are currently estimated to come a distant third. Getvoting.com recommends tactically voting for Labour in this seat.

The person said they were initially “confused” by the literature because it didn’t have any party branding, but added that “anyone who’s aware of [news around the election] will have realised that it was misleading from the beginning”.

The letter makes “sweeping claims” with “no data” to back them up, and “for someone who’s not following the election, including an expert on it gives it weight,” the person added.

“People become interested in politics at these kinds of times […], and seeing something from what appears to be an unbiased source can mislead you.” 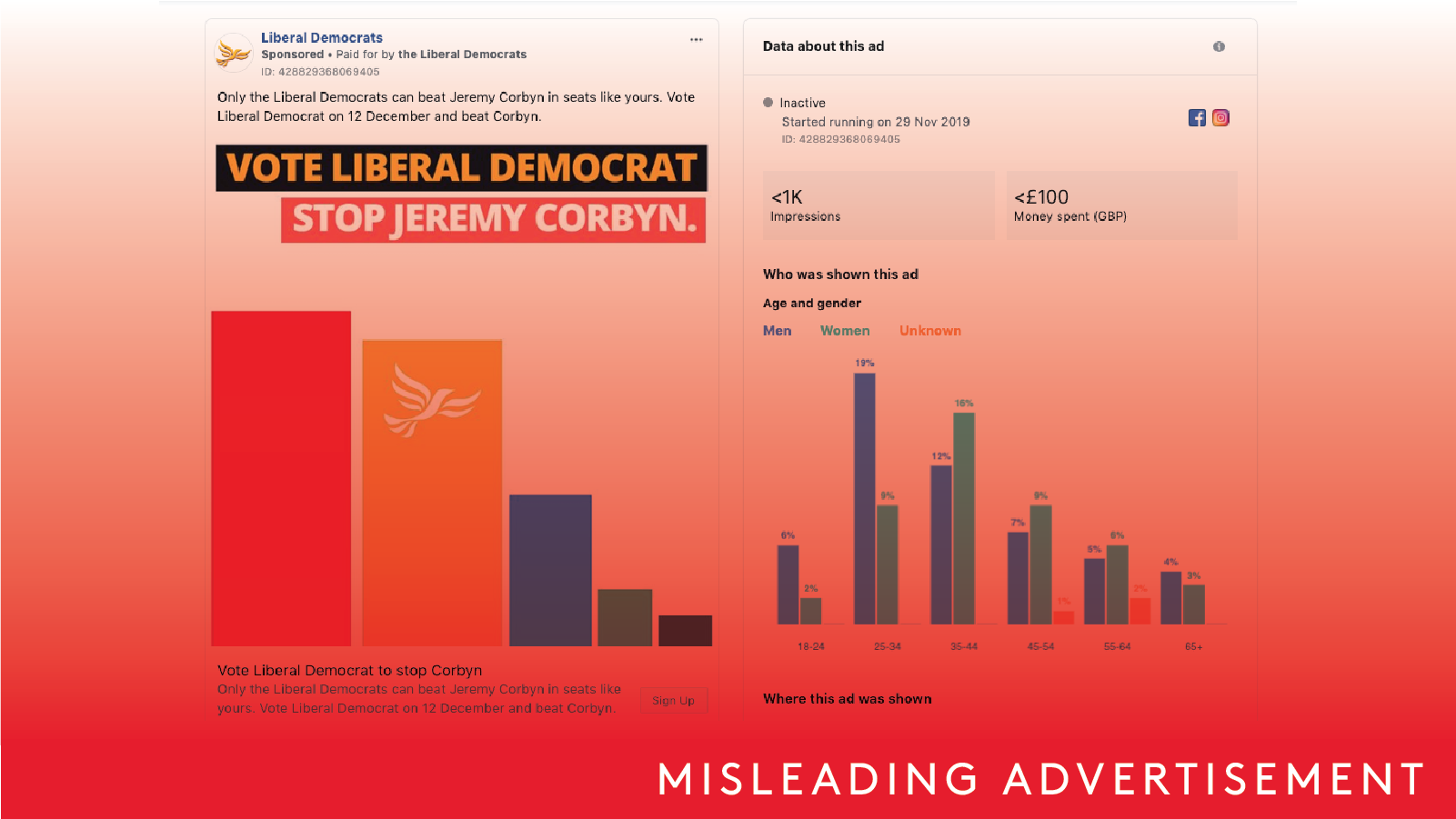 In addition to the leaflets, multiple instances of misleading Facebook ads by accounts related to the Liberal Democrats have emerged. They urge voters to vote for certain Lib Dem candidates because they are the closest to defeating the Conservatives or Labour – when in fact they are not.

The Facebook Ad Library does not show exactly where these ads were targeted, but First Draft was able to confirm some locations based on the captions of the ads and reports on Twitter.

Some of the ads mention specific constituencies, like Holborn and St Pancras, the seat of Labour front-bencher and Shadow Brexit Secretary Keir Starmer. The BBC’s election tracker reports that the Lib Dems came a distant third in this constituency in 2017. YouGov’s 2019 voting intention poll calls it a “safe Labour” seat for the 2019 general election.

Matt Turner, a 24-year-old who works in political communications in the Warwick and Leamington constituency in the West Midlands, tweeted about the Facebook ad he received from the Lib Dems.

He later told First Draft that “the idea that the Liberal Democrats can beat Labour in Warwick and Leamington is utterly absurd.”

“Only the Liberal Democrats can beat Labour in seats like yours” … yeah, right pic.twitter.com/dZUOyKf7tI

Warwick and Leamington is considered a marginal that is currently leaning to Labour from the Conservatives, according to YouGov’s 2019 voting intention poll. It predicts that the Lib Dems will receive only 6% of the vote. Getvoting.org, the website the party cited in the letters they distributed, recommends tactically voting for Labour in the constituency which was held by Jeremy Corbyn’s party at the 2017 election.

Many ads on the official Lib Dem Facebook page contain unlabelled bar charts, which appear to be the same no matter where they are promoted. This is a tactic First Draft has seen in the leaflets the party distributed earlier in November.

Angelica, a 36-year-old NHS analyst, posted a tweet about the advertisement. She told First Draft that “the bar chart isn’t addressed to any constituency, it’s just advertising nationally that it’s between the Tories and [the Lib Dems] based on absolutely nothing”.

The Liberal Democrats have published false or misleading information multiple times during the course of the campaign, having distributed campaign leaflets disguised to look like newspapers and faced a backlash when they published misleading bar charts on other campaign material.

However, they are not the only political party to have made inaccurate claims to mislead people during this election.

An investigation by First Draft revealed that nearly 90% of Conservative Party’s Facebook ads were promoting claims labelled as misleading by the platform’s fact-checking partners Full Fact.

The Conservative Party also changed their Twitter name and branding on its press account during the first ITV debate between Boris Johnson and Jeremy Corbyn to “FactCheck UK”, and produced a misleading website on the day the Labour manifesto was launched.