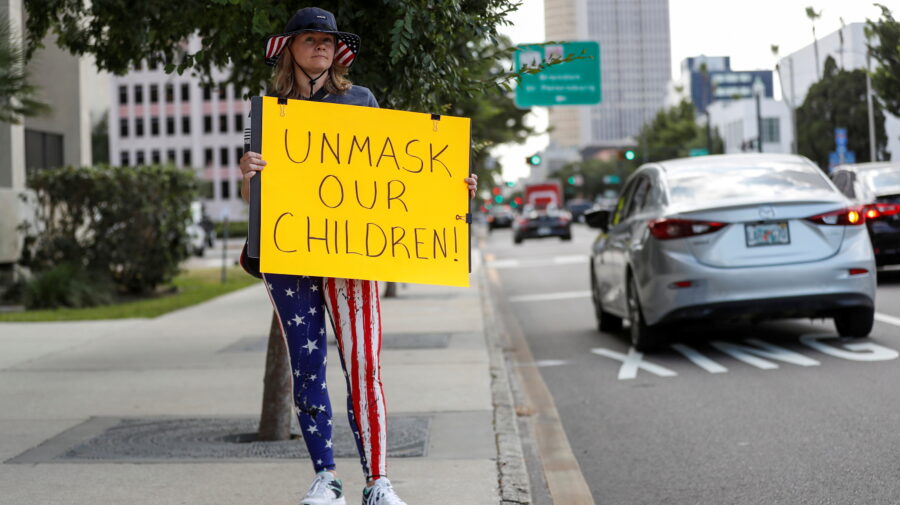 An anti-mask protester outside a school in Tampa, Florida. (REUTERS/Octavio Jones)

The World Health Organization last week recommended that fully vaccinated people continue to wear masks to prevent the spread of the highly contagious Covid-19 Delta variant. But different guidance from other health agencies is creating data deficits that may undermine efforts to contain the virus.

The US Centers for Disease Control and Prevention advises that people who are fully vaccinated “can resume activities without wearing a mask.” Numerous local and state governments — including Pennsylvania’s, which on June 28 dropped its mask mandate — have similar guidance.

In this context, a range of misinformation is spreading. In a tweet yesterday, Rep. Thomas Massie (R-KY), a frequent critic of the CDC and Covid-19 vaccines, misleadingly suggested that the agency had recommended against the use of N95 respirators, which offer more protection against the virus. “18 months into this and @CDCgov is still telling you NOT to wear the only mask that might possibly work,” he wrote. Massie ignored the context that cloth face coverings are mainly recommended to “reduce the emission of virus-laden droplets.” (Evidence suggests that they also provide significant protection to the wearer.) Where the CDC’s guidance suggests saving N95s for healthcare workers, the agency also wrote, “As N95s become available they can be worn in non-healthcare settings.”

Others responded to the WHO’s warning with baseless claims about a global plot to control populations. Conspiracy theorist Paul Joseph Watson, who has over 1.1 million Twitter followers, suggested in an article on his website Summit News that “people could be wearing masks for years or even decades into the future, and a new virus will probably emerge before that anyway in addition to COVID variants.” Watson’s comments ignore the context that the WHO’s recommendation about the continued use of masks is based on the fact that the majority of people around the world remain unvaccinated. — First Draft staff