How BuzzFeed wants to use its social media acumen to take on the hoaxers
First Draft uses cookies to distinguish you from other users of our website. They allow us to recognise users over multiple visits, and to collect basic data about your use of the website. Cookies help us provide you with a good experience when you browse our website and also allows us to improve our site. Check our cookie policy to read more. Cookie Policy. 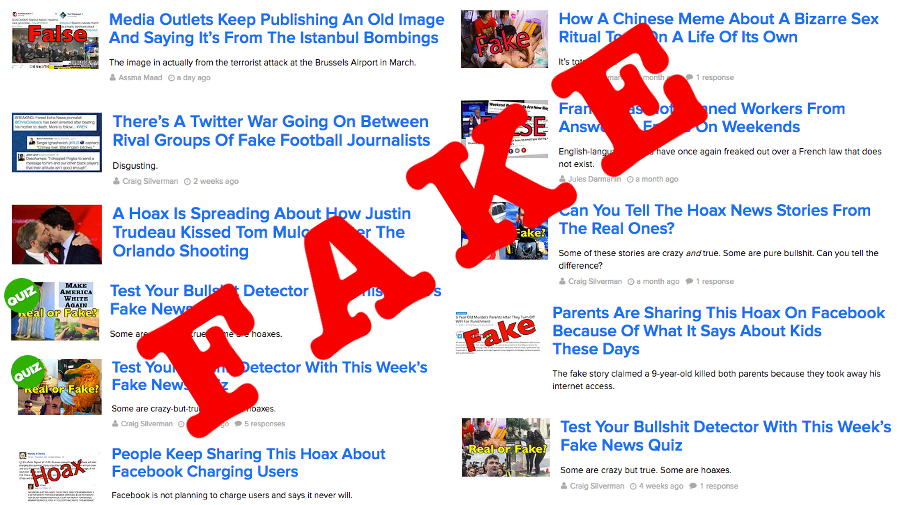 Almost a year to the day after launching its Canadian edition, BuzzFeed announced this week that it would be closing its Ottawa bureau and re-locating staff to the US.

Some outlets sold the news as BuzzFeed succumbing to the “pressure” of digital publishing affecting much of the industry, of a bureau in Ottawa that had served its purpose in covering the Canadian election and was no longer relevant to the organisation’s plans.

But hidden in the statement announcing the reshuffle was a line about “launching a new beat” at BuzzFeed to tackle the world of fake news.

BuzzFeed Canada editor and First Draft Coalition member Craig Silverman will be leading the charge from Toronto, “bringing his deep expertise at debunking hoaxes to our reporting arsenal,” said Scott Lamb, BuzzFeed’s head of international growth, “and acting as a resource for all BuzzFeed editions, as well as a watchdog on behalf of our readers worldwide.”

“We’re in a really early phase of testing” Silverman told First Draft, “and seeing what’s going to work in terms of content produced and what works for the BuzzFeed audience.”

Almost every other story in the last month from Silverman, who founded the (currently dormant) rumour-tracking project Emergent, has been a debunk of one kind or another. Quick stories which set the record straight, in-depth investigations into the phenomenon of misinformation and weekly quizzes of the latest fake news to go viral have all been testing grounds to see what resonates with readers.

The biggest challenge for BuzzFeed – and for fact-checkers and debunkers the world over – will be in figuring out a way to make debunks travel as far and fast as the false rumours they address.

Sensational or salacious lies have always been more interesting than the stone dry truth, but two recent studies put the reality of online rumours into stark relief. Researchers at the University of Warwick and the University of Indiana found it takes more than 12 hours for a false claim to be debunked online, on average, giving it an almost insurmountable headstart. 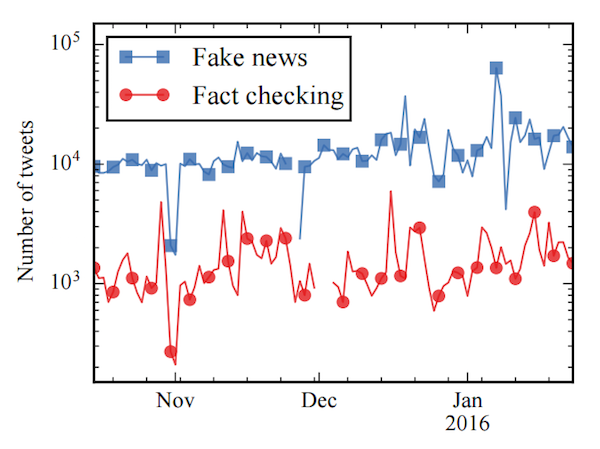 The number of tweets about fake news (blue squares) outweigh the fact-checking tweets about the same story (red spots), and by some distance, according to the research from the University of Indiana

With BuzzFeed’s commitment to analysing the social web and success in understanding what makes people want to share content online, Silverman hopes the new beat will help journalists and fact-checkers close the distance on the fakers by focussing on the audience.

Audiences see and share the same hoaxes many journalists ignore during the reporting process and with BuzzFeed’s “mandate” to “aggressively cover the internet and social media”, said Silverman, comes a responsibility to call out the fakes.

Check out: Battling hoaxers with humour could be the best way to beat them at their own game

Not every false claim or article demands a debunk, however.

“If something is very small then I don’t think there’s an argument to debunk that,” he said. “Arguably you’re giving more attention and traffic to a fake news site with the debunk [of a story that isn’t spreading] than it would get otherwise.”

Monitoring fake news sites and social accounts is part of the process, a process he has built up over years, and a major factor in early conversations he had with senior figures at BuzzFeed before joining the organisation. The aim, now, is to combine the two.

“We have a huge challenge to make debunkings more shareable and more social and make them reach audiences that aren’t already inclined to believe something is not true,” he said. “That’s the biggest part of this.

“So it’s taking all I’ve learned at BuzzFeed and all the tools and applying them to make debunkings more social.” But, he admits, “I have no idea what that will be yet”.

He will not be alone in finding some kind of solution, however, and will act as a facilitator for BuzzFeed journalists around the world looking to up their fact-checking game.

Journalists at BuzzFeed France have been active in verifying newsworthy claims on social media for some time now. Their Verifie channel launched last October and quickly becoming central in debunking rumours around the Paris attacks and calling out news organisations mistakenly re-publishing images from Brussels as from this week’s bombing in Istanbul.

And a dedicated Slack channel has become central for journalists in BuzzFeed newsrooms around the world to discuss hoaxes and verification techniques. Combined with the kind of data-based social analysis the organisation is putting at its core, Silverman hopes to make debunking “a real global effort” on a par with its news and “buzz” output.

BuzzFeed isn’t the only major outlet making an effort to combat fake news, of course. France 24’s Observers has been debunking hoaxes for some years, Gizmodo has a sub-site – Factually – for online hoaxes, and until the end of last year the Washington Post’s Caitlin Dewey ran a weekly column on ‘What Was Fake on The Internet This Week’. BBC Trending has a similar remit to BuzzFeed, although with less of a commitment to debunks than Silverman is aiming for, and there are others, to be sure.

There has also been a sea-change in many organisations’ attitude to hoaxes over the last year, perhaps spurred by the amount of false reports around major news events, in which outlets will chip in with a debunk when a false story goes massively viral. But a global, organisation-wide approach to countering the growing blight of online misinformation is rare.

The BuzzFeed project is still in its earliest days, but Silverman is hopeful and open to sharing what he learns.

“There’s a sense that if we’re going to cover what people are talking about then we need to have the skills across the organisation,” he said. “But also rather than just leaving hoaxes out there we have a responsibility to address them.

“So we’re taking the BuzzFeed approach of testing and experimenting and adapting and applying it to debunking.” 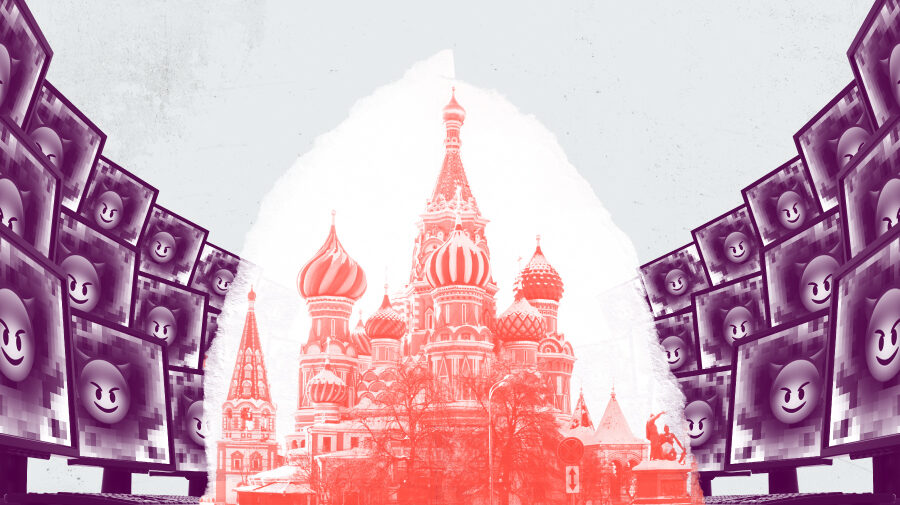 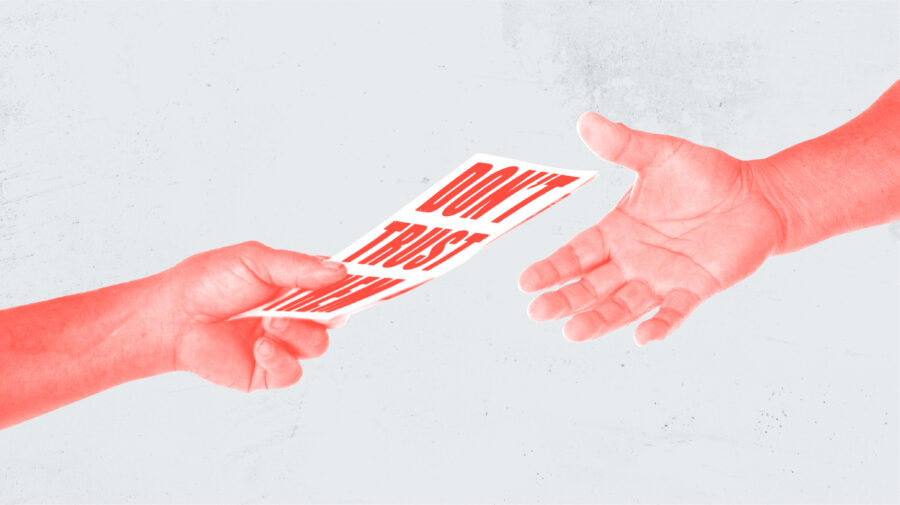 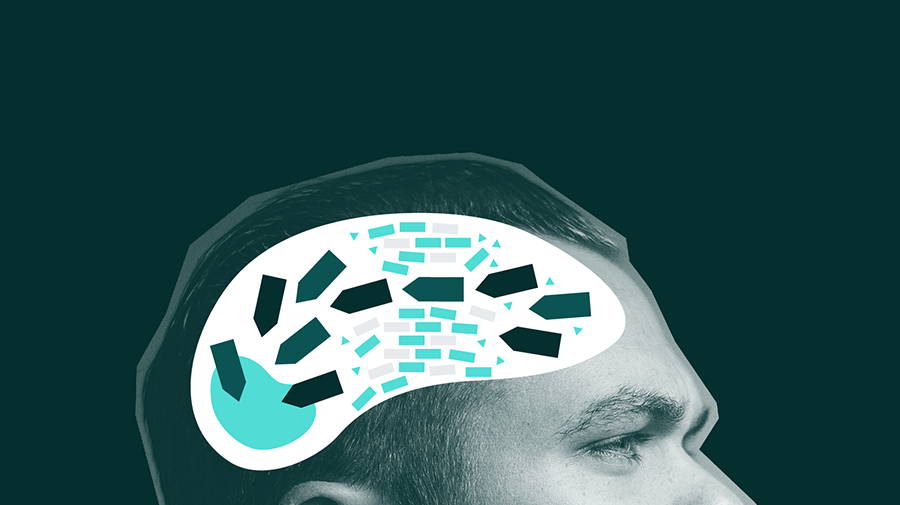