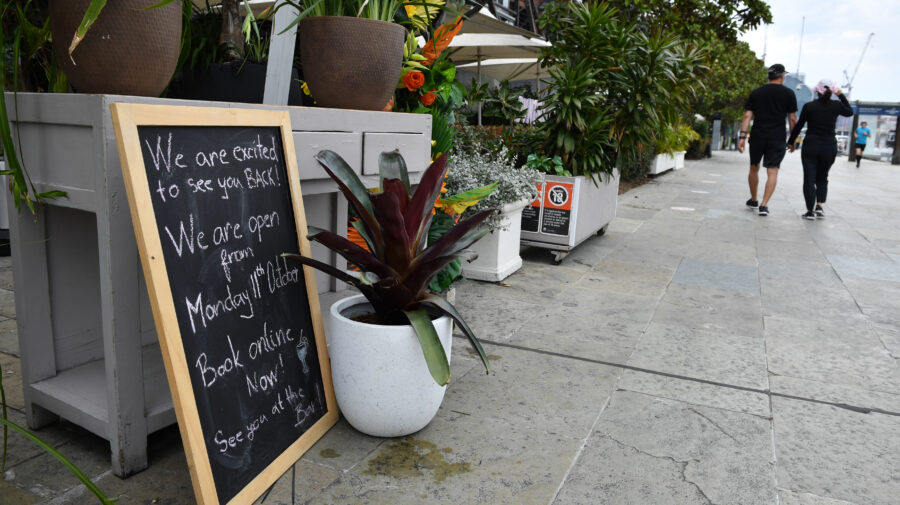 Signage at a business at Barangaroo in Sydney, Saturday, October 9, 2021. Fully vaccinated NSW residents have one day remaining of lockdown, with COVID-19 restrictions set to ease from Monday. (AAP Image/Joel Carrett)

As the Australian state of New South Wales gradually comes out of lockdown, some anti-vaccine and anti-lockdown activists have adopted Nazi references to voice their opposition to measures such as digital vaccination certificates (also known as “vaccine passports”) and relaxed restrictions only for fully vaccinated people.

Opposition movements to Covid-19 vaccination have frequently used Nazi references to claim governments and health officials are imposing authoritarian measures on the population, even by high-profile figures with millions of followers. Most recently, American podcaster Joe Rogan was slammed by a Holocaust survivor for resharing a video to his 13.3 million followers on Instagram, which showed clips related to Covid-19 and authoritarianism, including clips of Nazi imagery, interspersed on top of a narration from Rogan claiming “American freedom” would slip away if vaccine mandates were implemented. Around the world, anti-vaccine protests have featured imagery that implied protesters were being persecuted like the Jewish during the Third Reich.

This type of comparison is unfounded, as Jewish people and others such as the Romani or gay people were persecuted for their race and sexuality, and not over a personal choice such as vaccination, and were actively discriminated against as an exclusionary policy, compared to vaccination as an inclusion and protection of life policy. Moreover, the comparison trivialises and dishonours the memory of those who suffered.

On October 11, restrictions in New South Wales were relaxed for fully vaccinated residents after an over-100-day lockdown. These so-called “new freedoms” carry the condition that people must provide proof of vaccination and check in at venues, prompting some social media users to label the day “Apartheid Day” instead of the popular term “Freedom Day.” Users compared the vaccination evidence to the yellow Star of David that Jewish people were required to wear during the Third Reich.

An Australian “mom influencer” who has over 7,400 followers on Instagram posted a photo of herself and her three children each wearing a yellow Star of David that bore the words “No Vax.” In the lengthy caption, she wrote that she has been deemed a “threat” and that history was repeating itself. She locked her account after a public outcry and denied comparing the lockdown to the Holocaust in a statement to Australian media outlet Pedestrian TV. The influencer has referred to the Holocaust in several anti-vaccine posts in the past; for instance, she posted an image of herself a few days prior referencing Nazi-era prisoner uniforms with the hashtags #historyrepeatsitself and #whichsideareyouon. She also mentioned Anne Frank and the Nazis in a post discussing the social divide over vaccination, claiming to be “praying for a great awakening.”

A video purportedly showing Victorian police officers questioning a person about their participation in anti-lockdown protests based on their social media activity has garnered over 2.6 million views since being posted by right-wing activist Avi Yemini on Twitter on October 10. The video alongside Yemini’s caption “Australia has fallen” has prompted comments from other right-wing figures as well as social media users comparing Australia to Nazi Germany. One account associated with the anti-CCP Himalaya movement commented with a meme showing a Nazi swastika made of syringes, implying an equal comparison between Nazi-era measures and efforts fo vaccinate people. The same image has been seen elsewhere, such as at an anti-vaccine protest in Utah. Other comments about the video said Australia is “about to be” Nazi Germany and compared Australia to depictions of totalitarianism in George Orwell’s 1984, especially elements of pervasive government surveillance and INGSOC, the ideology of totalitarianism depicted in the novel. — Stevie Zhang