Justice through the viewfinder: Eyewitness video is putting power in the hands of the public
First Draft uses cookies to distinguish you from other users of our website. They allow us to recognise users over multiple visits, and to collect basic data about your use of the website. Cookies help us provide you with a good experience when you browse our website and also allows us to improve our site. Check our cookie policy to read more. Cookie Policy.

Justice through the viewfinder: Eyewitness video is putting power in the hands of the public 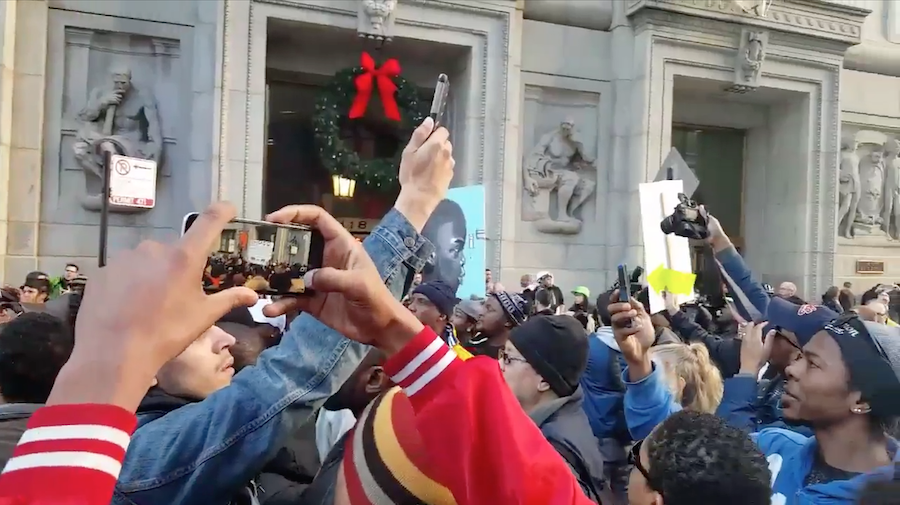 In 2015, eyewitness video did more than just make headlines –  it changed the way activists and police interact with one another and the community at large

If one theme emerged from incidents of police violence and the protests that followed in 2015, it was that video evidence is power. It had the power to bring awareness and, sometimes, exact justice — but it also provided a means for activists to protect themselves in potentially volatile situations.

A teen’s cellphone video of police breaking up a pool party of black teenagers in McKinney, Texas, in June kicked off local protests and national discussion of the role of community relations in modern policing. The same discussion was reignited in October when several videos emerged from a South Carolina high school classroom that showed a school resource officer throwing a disobedient student out of her chair.

There was perhaps no more pivotal an eyewitness video in 2015 than that of Feidin Santana, who filmed the fatal shooting of Walter Scott by Officer Michael Slager in Charleston, South Carolina.

Santana’s bystander video provided evidence that ran contrary to the official police report — and its release ultimately led to Slager’s dismissal and arrest on murder charges.

The evidentiary nature of eyewitness video makes its recording especially important for those who believe themselves in danger of arrest — or worse — in police interactions.

Following the fatal shooting of Jamar Clark by police on November 15, Black Lives Matter protesters occupied the Minneapolis Police Department’s fourth precinct to call for the release of a video of the incident. When city officials attempted to break up the occupation on November 18, activists were ready in case the eviction became violent.

Complete and utter chaos. This the improved community relations you were talking about @ChiefHarteau ? pic.twitter.com/AtCBi0dnbb

Amid the chaos in this video, a voice can be heard telling protesters “get out your phones” to record the dispersal as protection and evidence.

In Chicago, protests and marches began around Thanksgiving, when video was released of the 2014 police shooting of 17-year-old Laquan McDonald. On December 9, Mayor Rahm Emanuel apologized for the shooting, hours before hundreds of people marched through downtown calling for his resignation.

In the numerous videos of those protests, many people can be seen holding their phones up to record what is happening around them.

Many of the Chicago videos show protesters asking police officers questions about the shooting and the department, but most do not answer. In a protest on Black Friday, one protester interviewed a police officer who agreed to speak on camera (below).

Coordinated eyewitness video of police incidents is hardly new — but it seems to have become more widespread and organized in the age of Black Lives Matter. In 2011, Occupy Wall Street activists streamed and recorded videos of their protests and subsequent evictions by police across the world. In Brazil in 2014, Papo Reto and other activists began collecting video evidence of unlawful killings by police.

In 2015, the emergence of new video streaming tools through Periscope and Facebook gave eyewitnesses more options. In addition, many niche mobile applications have recently been released to help people who capture police violence, rights abuses and other events on camera to distribute their evidence safely.

To their credit, more U.S. police departments are themselves turning to video evidence. Many departments are using body cameras to document officer interactions, including in Chicago where a recent pilot program was expanded. Baltimore, which saw unrest last spring in the wake of Freddie Gray’s death, finished its pilot program recently, and authorities plan to roll out the program permanently in the next few months. Not only can the cameras protect communities, they can protect officers against accusations of misconduct. In an op-ed, the Buffalo News wrote that body cameras would weed out the bad officers.

The Seattle Police Department is among those aiming to make it easy for the public to access its body-camera footage. It launched a YouTube channel during its body-camera pilot program to host blurred versions of the videos as previews to help people request footage, after which the department will provide a properly redacted version of the video.

Unfortunately for the media, some other U.S. states are moving to protect police body-camera videos from public release. It was body-camera footage that led to a Cincinnati police officer being charged in the shooting death of Samuel Dubose after a routine traffic stop. That video was requested under the Ohio Open Records Act, but was released only after The Cincinnati Enquirer sued Hamilton County for the footage. The McDonald video from Chicago was released on the order of a judge following a similar request.

These restrictions only further underscore the need for eyewitness video to serve as the public’s “eyes on the ground” in police interactions.

Activists and citizen journalists who wish to record video evidence in police interactions and other situations should take advantage of resources like these apps for documenting police violence andsuch as WITNESS’s field guide to collecting video as evidence to help them do so safely and ensure their footage will be usable by officials and news media.

Jennifer Connic is a senior journalist and Mandy Jenkins is the director of news at Storyful, a member of First Draft.