The UK just joined the club of countries where the ruling party created its own 'fact-checking' service
First Draft uses cookies to distinguish you from other users of our website. They allow us to recognise users over multiple visits, and to collect basic data about your use of the website. Cookies help us provide you with a good experience when you browse our website and also allows us to improve our site. Check our cookie policy to read more. Cookie Policy. 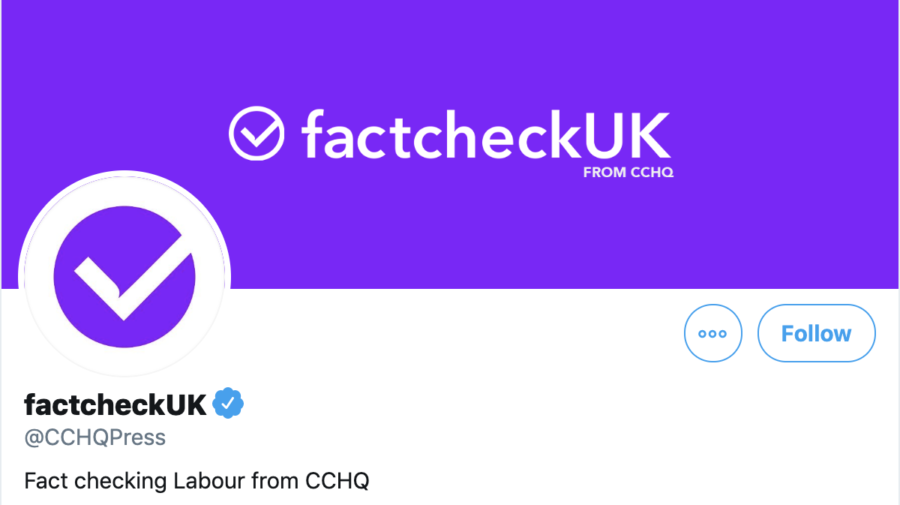 The Conservative Party press office rebranded as 'factcheckUK' for the first televised debate ahead of the December election.

The UK election campaign finally swung into action on November 19 as Prime Minister Boris Johnson and leader of the opposition Jeremy Corbyn locked swords in the first televised debate.

But as viewers settled in to follow reaction on Twitter many were greeted with a surprise — the ruling Conservative Party press office had rebranded its verified account as “factcheckUK”.

Over the following hour it proceeded to issue branded “fact checks” of comments made by the two men, complete with animated GIFs and sophisticated graphics. They overwhelmingly criticised Corbyn and praised Johnson. 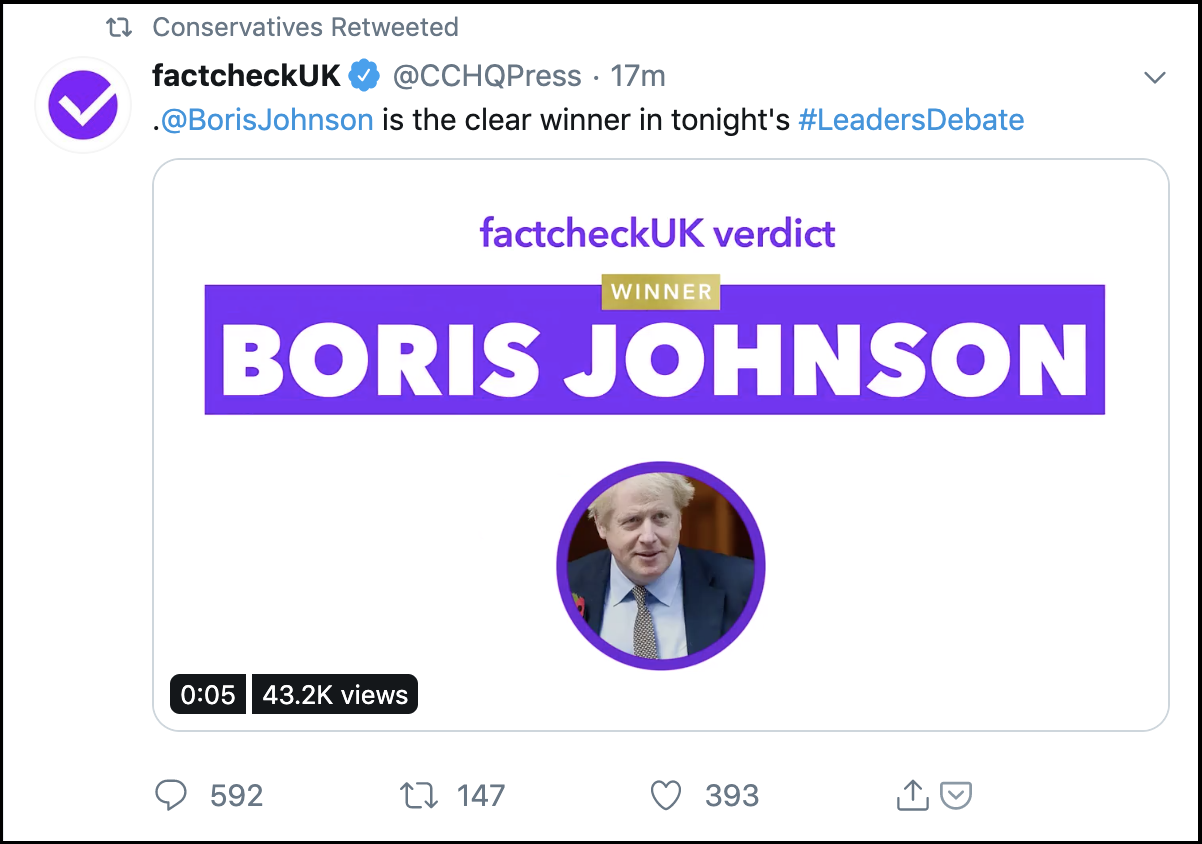 The CCHQPress account, rebranded as ‘factcheckUK’, praised Boris Johnson throughout the debate. Screenshot by First Draft.

Full Fact, a charity which has fact checked claims in every UK election since it was founded in 2009, called the rebrand “inappropriate and misleading” and urged viewers not to confuse the account with independent UK fact checkers with similar Twitter handles.

It is inappropriate and misleading for the Conservative press office to rename their twitter account ‘factcheckUK’ during this debate. Please do not mistake it for an independent fact checking service such as @FullFact, @FactCheck or @FactCheckNI

The account reverted to its official branding after the debate had ended, but not before hundreds of Twitter users had reacted with outrage at the perceived attempt to mislead the public.

A tweet claiming to have “held Jeremy Corbyn to account” after the debate had been shared 99 times at the time of writing, with more than 1,600 — largely negative — replies.

The episode means the UK has now joined an illustrious club of nations in which the ruling party sets up its own fact-checking service to push a party line. Here, First Draft presents some of the others.

In June, Mexico’s President Andrés Manuel López Obrador launched his own fact-checking organisation called Verificado Notimex. The name almost exactly the same as that of Verificado, the collaborative initiative launched in 2018 to cover the Mexican election that year. Notimex is the federal government news agency.

Within days its legitimacy was questioned as the president gave a 90-minute speech looking back at his first year in power, including several questionable claims. Verificado Notimex didn’t publish a word about the speech.

In late 2017, Czech deputy prime minister Andrej Babis, then candidate to be the country’s prime minister, launched his own fact-checking service called Můj Demagog, which translates as “My Demagogue”.

Again, it had a strikingly similar name to an existing fact-checking service called Demagog.cz

“It’s basically like fact-checking, but he’s just talking about his opinions,” said Ivana Procházková, an expert at Demagog, speaking to Poynter before the election. “He’s defending himself, but without sources. And if there are any sources, it’s usually just media links or any of his previous opinions.”

Babis went on to win the election.

Turkey’s leadership has a peppered recent history when it comes to a public relationship with the truth. Fact-Checking Turkey, known on Twitter as @FactCheckingTR, was launched in 2016 by Bosphorus Global, the media company linked to finance minister Berat Albayrak, who also happens to be the son-in-law of the country’s President Erdogan.

Research by Poynter found that often Fact-Checking Turkey would rather go in for articles which score political points rather than dig up verifiable facts, and would often conduct “fact checks” with only official statements as a source.

Not long after sweeping to a hotly contested victory in this year’s national elections, Prime Minister Modi’s government announced it would create its own fact-checking service.

The country’s ministry of information and broadcasting announced further details in recent weeks, in which the initiative is to be titled FACT, for find, assess, create and target.

Full details have yet to be announced but the Times of India reported: “Sources said the team of information officers has also been mandated with creating appropriate content to ‘rebalance’ the narrative and promote the government’s official position, and to target content to ensure that the government versions are visible and accessible to public.

“The FACT check mechanism, which will largely focus on online and digital content for now, will also be expanded to the electronic media later.”

First Draft is monitoring disinformation and media manipulation around the UK election as part of the CrossCheck initiative.