UK General Election 2019: Doctored videos, fake accounts and suspicious ads surface in the second week
First Draft uses cookies to distinguish you from other users of our website. They allow us to recognise users over multiple visits, and to collect basic data about your use of the website. Cookies help us provide you with a good experience when you browse our website and also allows us to improve our site. Check our cookie policy to read more. Cookie Policy. 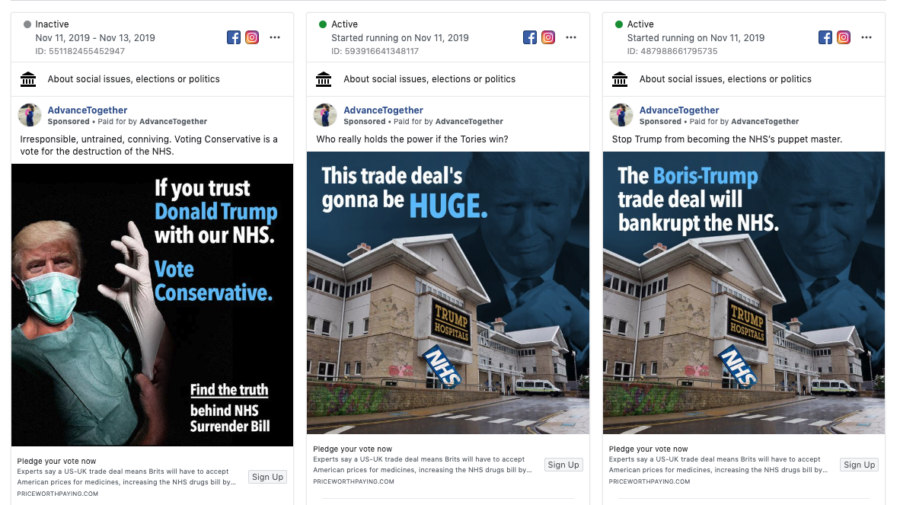 First Draft is keeping close tabs on the UK’s general election as the party campaigns pick up speed in their second week.

Investigations from the collaborative CrossCheck project included a Conservative councillor behind an anti-Corbyn Facebook Page, a fake account for a prospective Brexit Party candidate, and a former Liberal Democrat paying for anti-Conservative ads.

Former Liberal Democrat candidate Annabel Mullin appears to have paid for more than 150 ads in the last two weeks, many of which equate a vote for the Conservative Party as “selling the NHS to Donald Trump”.

The ads mix photoshopped montages with a petition aimed at stopping the ‘Trump-Boris alliance’. Each ad collected between 1,000 and 2,000 impressions and cost under £100.

The ads have been posted through the Facebook Page for the short-lived political party called Advance Together. 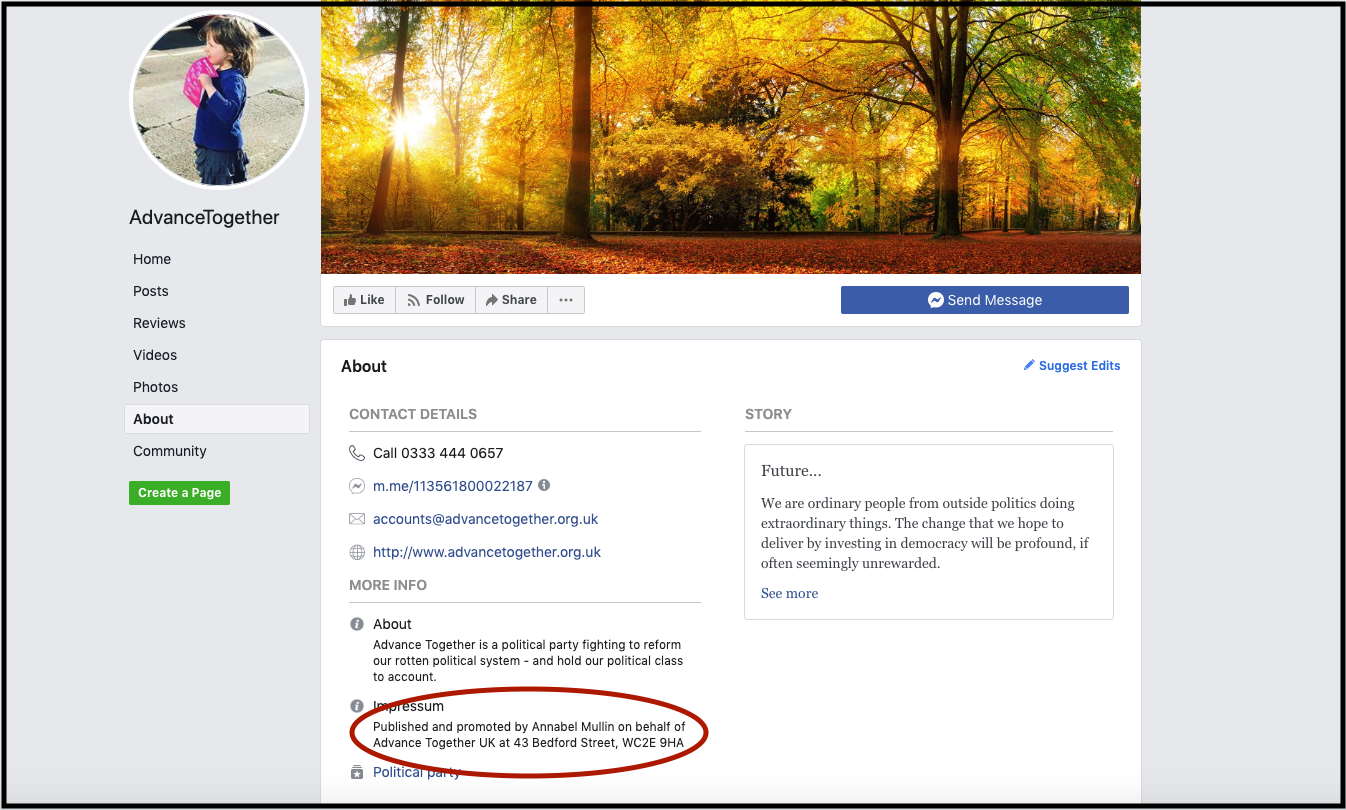 The description of the ‘Advance Together’ page reveals Mullin is publishing ads on the group. Screenshot by author.

None of the ads in the library mention who paid for them, but First Draft found the page is “published and promoted by Annabel Mullin” on the Advance Together’s ‘About’ section on its Facebook page.

Mullin was a candidate for the Liberal Democrats in 2017 and later went on to co-found Advance Together. A profile on Change UK lists her as the leader of the grassroots organisation Renew UK, although Mullin told First Draft that she resigned in June.

The most recent active ads compare a vote for the Conservative Party to handing Donald Trump the NHS. The ads link to a website called PriceWorthPaying.com which invites voters to sign up to “say no to a Boris-Trump deal”. 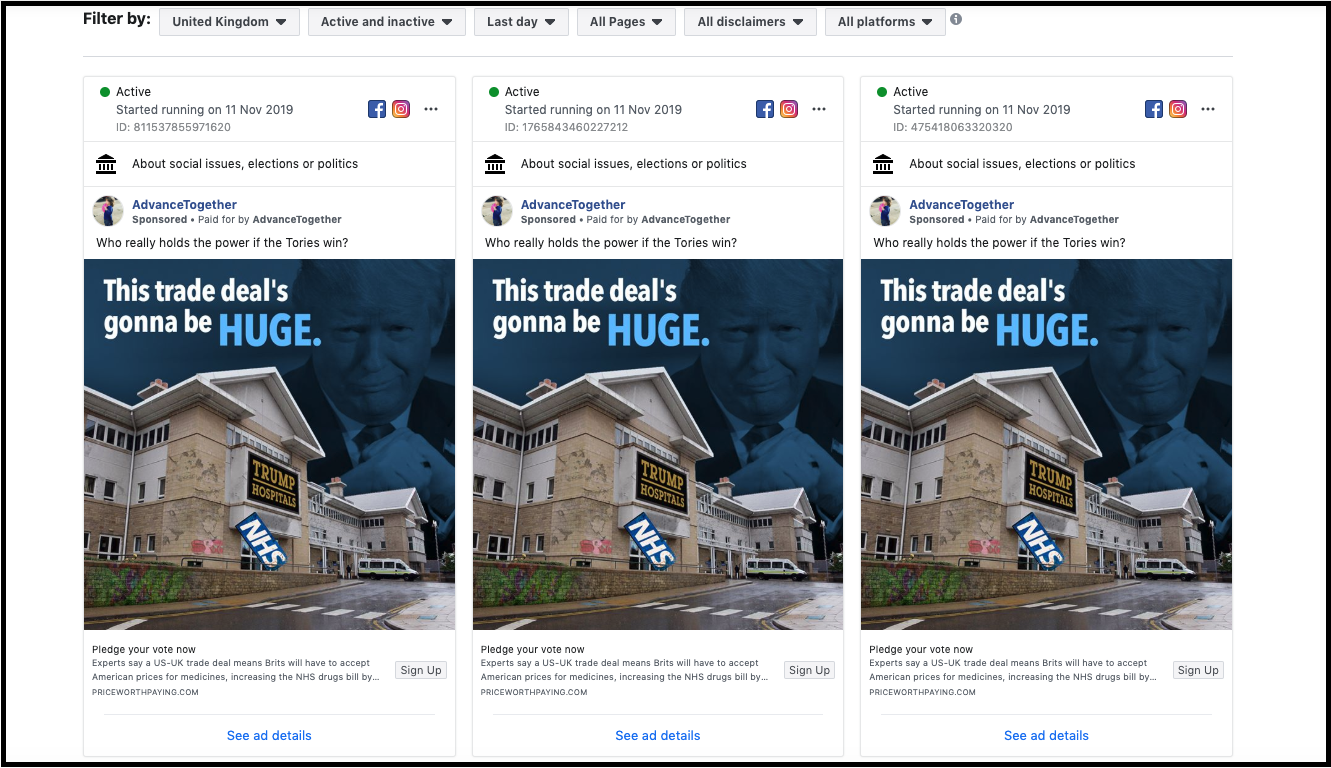 Ads run by the ‘Advance Together’ Facebook page. Screenshot by author.

The website contains unverified claims like: “Experts say a US-UK trade deal means Brits will have to accept American prices for medicines, increasing the NHS drugs bill by £500 million a week” and that “American companies will also be allowed to take over our hospitals”.

Can the real Wayne Bayley please stand up

Farage announced on Monday that his party would not field candidates in constituencies where the Conservative Party had won in the past, thereby removing around 300 of their prospective candidates from the campaign.

An unverified account called @Wayne_BayIey responded to the announcement by sharing a tweet from Farage’s account with the caption “Fuck your election strategy and Fuck Boris”, and continued publishing foul-mouthed tweets criticising Farage’s announcement.

Hundreds of Twitter users interacted with the tweets, assuming them to be genuine, which caught the attention of several news organisations. First Draft chose not to link to these stories to avoid amplifying the misinformation. 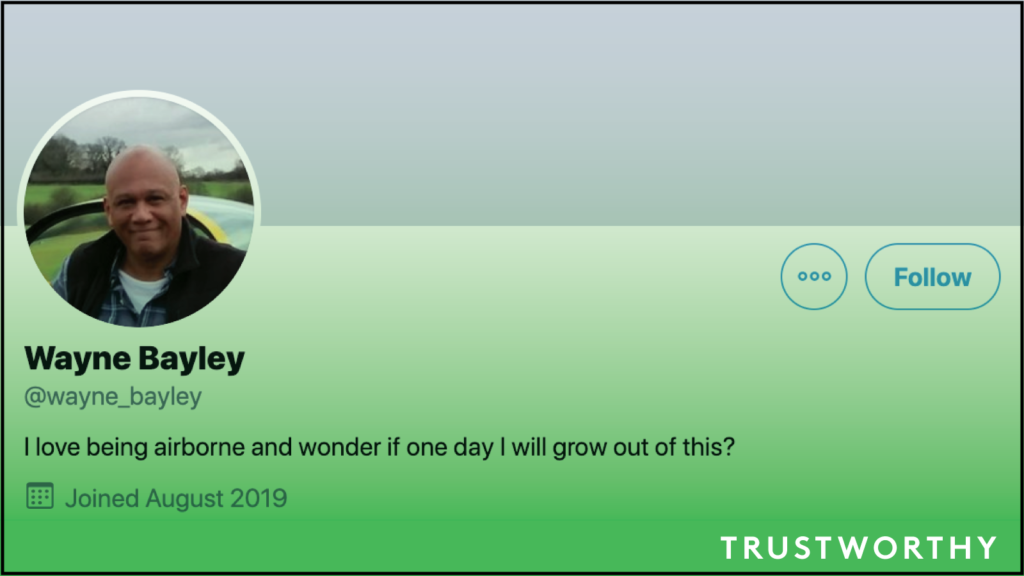 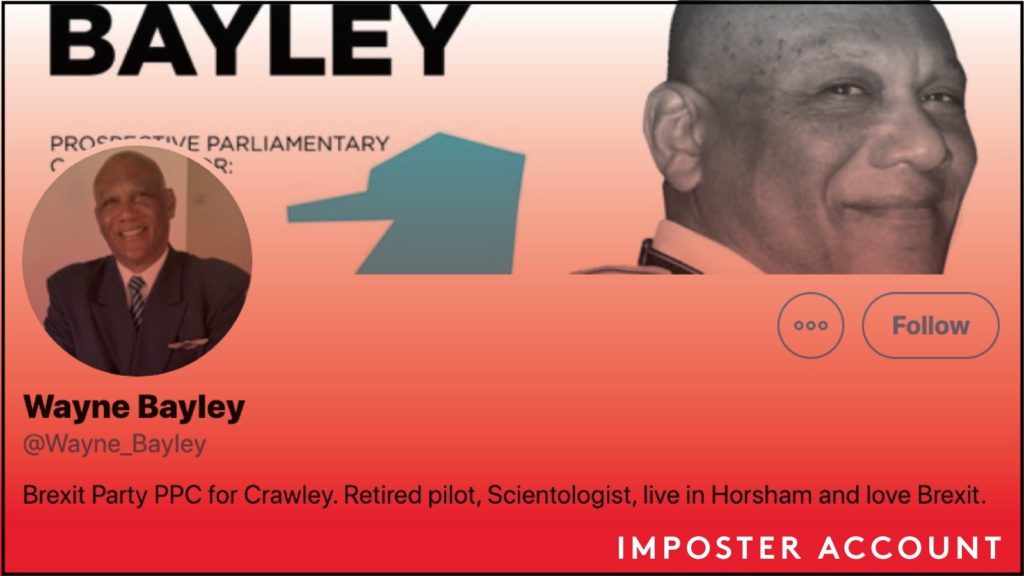 The fake and the original accounts were virtually indistinguishable, with one username @wayne_bayley and the other @Wayne_BayIey. Both were created in 2019.

First Draft was able to verify that @wayne_bayley was indeed the original account. The fake account used a capital ‘i’ in place of the ‘l’ in ‘Bayley’, and by mapping the real Bayley’s social media presence for additional context.

A spokesperson from the Brexit Party confirmed that @Wayne_BayIey was fake, and Bayley himself told First Draft: “Somebody created a fake account and they posted several things that are not true on my election campaign and on being refunded by [Nigel] Farage.”

The Conservative Party ran ads earlier this week claiming that a Labour government would spend £1.2 trillion in five years. The claim was widely criticised, and was debunked by Full Fact who concluded that “many of the figures behind this estimate are uncertain or based on flawed assumptions.”

Full Fact also spotted that the documentation showing the breakdown of the Labour Party’s spending on CostofCorbyn.com, a Conservative-run website promoted by Chancellor Sajid Javid, did not provide links to its sources. It instead simply appeared as underlined blue text. The links have since been added.

Four anti-Corbyn Facebook ads were published by the Facebook page. Upon closer inspection using Facebook’s Ad Library, First Draft discovered that James Bickerton was the person paying for the ads. 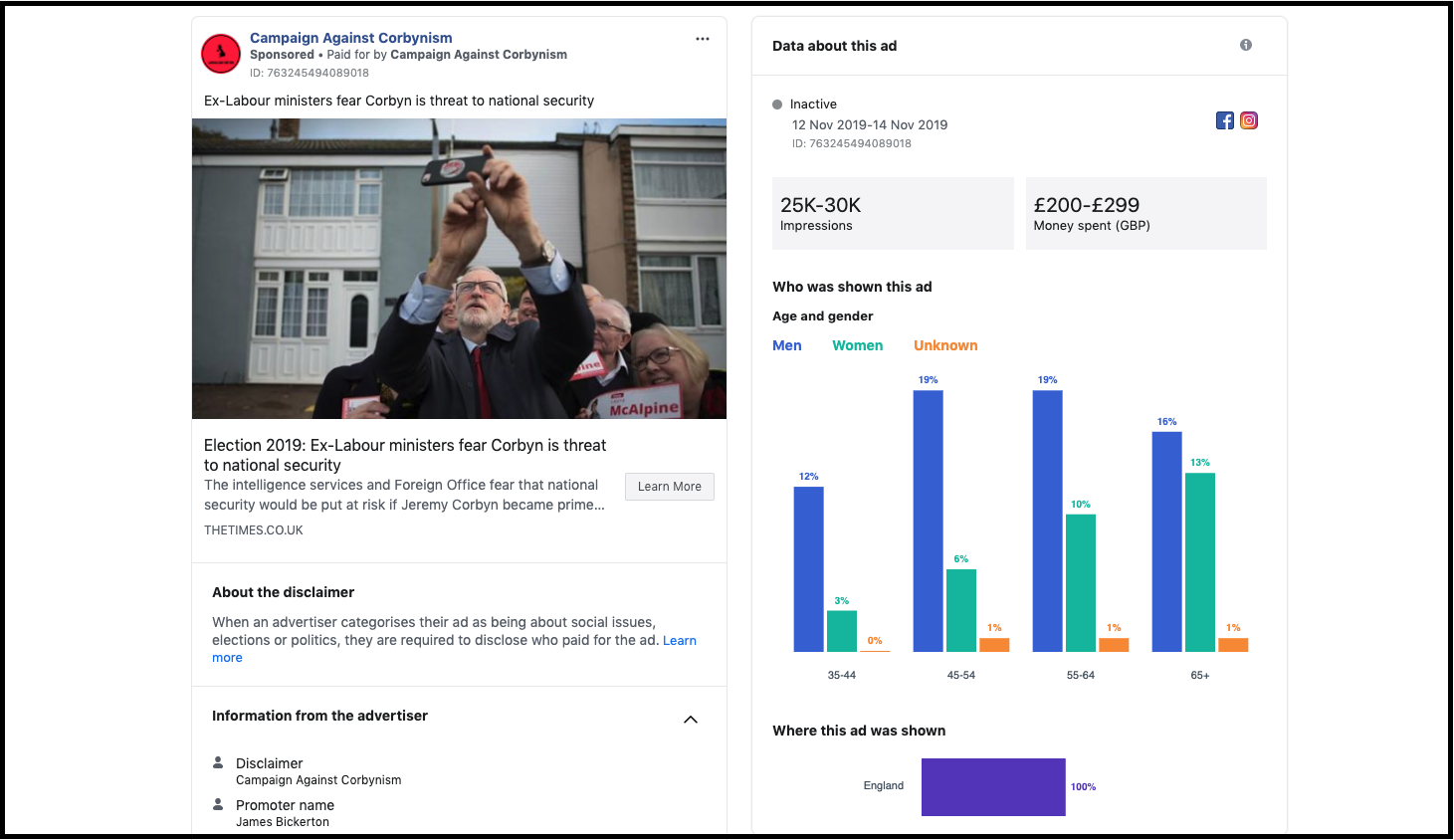 Bickerton’s Twitter page says that he runs the ‘Campaign Against Corbynism’, and is listed as an overnight reporter on the Daily Express’s website. He wrote his last article for the Daily Express on Sunday, November 10.

Bickerton confirmed to First Draft that he runs the page, and has been running ads since Sunday. He also confirmed he does “two shifts a week” at the Express but is not a full time staffer.

A pro-Conservative Twitter account called “News Addict” shared a video of a BBC interview with Ian Blackford, the SNP leader in the House of Commons, on the day the party’s campaign was launched. The video however had been edited to make Blackford appear flustered and unable to answer questions about the NHS.

Veteran BBC reporter Andrew Neil was caught out by the misleading footage and retweeted it, which led to widespread criticism and was followed by an apology.

Ian Blackford struggled under Nick Robinson’s tough questioning but I now realise the previous tweet on this was edited to make it look worse than it was. This gives a better flavour. I will delete previous and also post whole show so you can see interview in full https://t.co/WUjyQlwdsr

Doctored videos and targeted misinformation campaigns have been a feature of this election campaign, with several users and media houses either deliberately or inadvertently posting and sharing misleading information.

A Conservative councillor for Bromley is funding Facebook adverts against Jeremy Corbyn and his Labour Party through a Facebook page called ‘Working4UK’. The page was created on October 29 as a ‘Political Organisation’, and also has a Twitter page and a website. 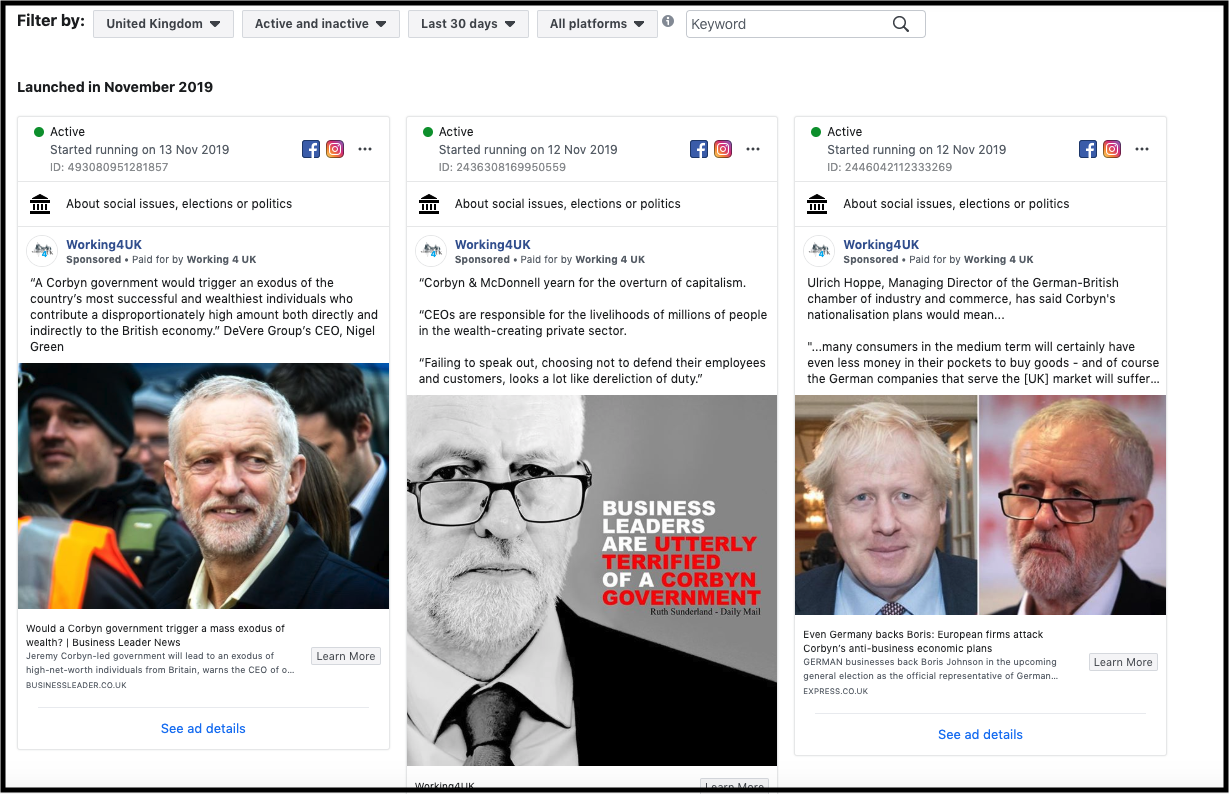 Anti-Corbyn and anti-Labour ads by Working4UK were paid
for by a Conservative councillor. Screenshot by author.

The ads are labelled as “Paid for by Working4UK” — but it is only by clicking into the details of the advertiser does it become apparent that councillor Suraj Sharma has paid for them.

The group’s Facebook page mentions Mr Sharma by name in the ‘About’ section, although it does not reference his role as a Conservative councillor. The Twitter page does not mention Mr Sharma. Working4UK is positioned on both pages as “A voice for UK businesses against the impending threat of a far left marxist government led by Jeremy Corbyn.”

Councillor Sharma lists Working4UK in his register of interests on the Bromley Council’s official website. His Facebook and Instagram pages show him posing with senior Conservative ministers such as Boris Johnson, Sajid Javid, Dominic Raab and Theresa May. First Draft has contacted Mr Sharma for comment.

BBC Breakfast later issued an apology, calling it a ‘production mistake’.  Several Twitter users quickly caught the mistake and challenged the BBC for using the old video. This tweet from that morning received over 13,000 retweets.

Hi @BBCNews. Could you please explain the editorial decision to use this footage of Boris Johnson laying a wreath in 2016 on this morning’s news bulletin instead of footage from yesterday’s service?#BBCBreakfast #BorisJohnson pic.twitter.com/bzyw1bktx7

Users accused the news outlet of attempting to use their platform to protect the reputation of the PM, who laid the wreath upside down this year.

The BBC has been accused of bias for using old footage in the past, and that accusation surfaced again in the responses to this video. Old pictures and videos taken out of context are a common disinformation tactic, and there have been other instances of old Johnson videos being used recently.

Another video from 2016 was shared by a pro-Labour Twitter account last week showing the Prime Minister being booed outside his home that was viewed more than 10,000 times.

In September, a four-year-old video of Johnson being pelted with coloured balls was shared by a user with over 100,000 followers alongside the caption ‘Scum attack our Prime Minister’.

Check out First Draft’s round-up of disinformation and media manipulation from the first week of the UK election here.

Correction: a previous version of this article stated that Annabel Mullin was the leader of Renew UK, based on an online profile on the website of the organisation Change UK. The article was amended after Ms Mullin told First Draft that she resigned in June.

Update: This article has been updated to reflect that Mr Sharma’s name is listed on the Facebook page of Working4UK.