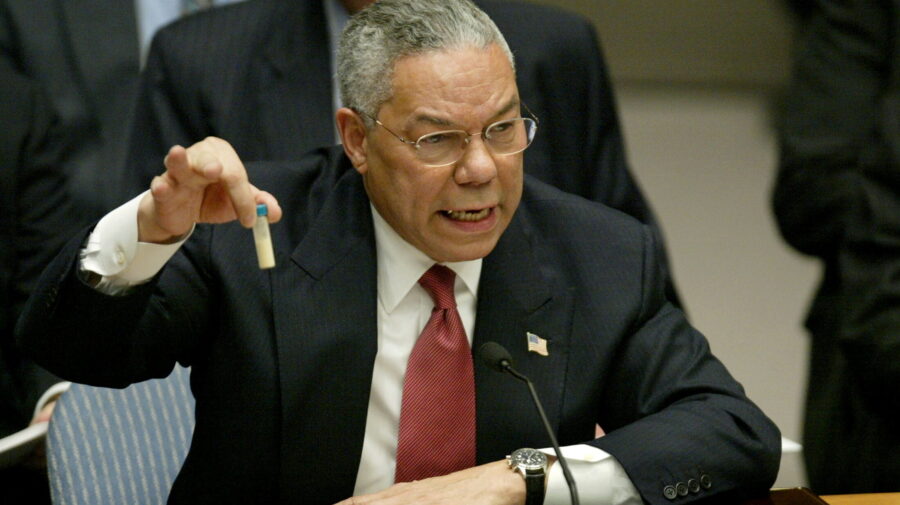 FILE PHOTO: U.S. Secretary of State Colin Powell holds up a vial that he described as one that could contain anthrax, during his presentation on [Iraq] to the U.N. Security Council, in New York February 5, 2003. REUTERS/Ray Stubblebine/File Photo

Almost immediately after the October 18 death of Colin Powell became public, vaccine and pandemic skeptics started claiming that the Covid-19 vaccine, which the former US Secretary of State had received, was ineffective or even contributed to his death.

While Powell, who had also served as chairman of the Joint Chiefs of Staff and other top government posts, died from Covid-19 complications, the 84-year-old had also been battling multiple myeloma, a white blood cell cancer that weakened his immune system.

But on Gab Trends, a news aggregation site run by the far-right social site Gab, a headline claiming Powell “died of #COVID19 despite being vaccinated twice” was placed front and center.

A TikTok video commenting on Powell’s death, with embedded text that reads, “SO TELL ME HOW THE VACCINE SAVE PEOPLES LIVES!!! WAKE UP,” was shared over 4,300 times. And in a Facebook post that’s been shared over 500 times, Pamela Geller, an anti-Muslim provocateur, used Powell’s death to advance the conspiracy theories that the Covid-19 vaccine itself was causing Covid infections.

The phenomenon of attributing prominent public figures’ illnesses or deaths to the Covid-19 vaccine has been common since the introduction of the vaccine late last year. In January, posts alleging that baseball great Hank Aaron was killed by the Covid-19 vaccine went viral on social media. These claims were debunked by multiple outlets.

But at the same time, some media watchers also disagreed with mainstream media’s coverage of the event. For example, Mathew Ingram of the Columbia Journalism Review criticized a tweet by the Associated Press as “doing the anti-vaxxers work for them!”

“Here’s a perfect example — mentions COVID, but doesn’t mention anything about blood cancer or other co-morbidities, not in this tweet and not in either one of the other two tweets in this thread,” Ingram tweeted. — Keenan Chen