Vaccine trials are leaving misinformation in their wake 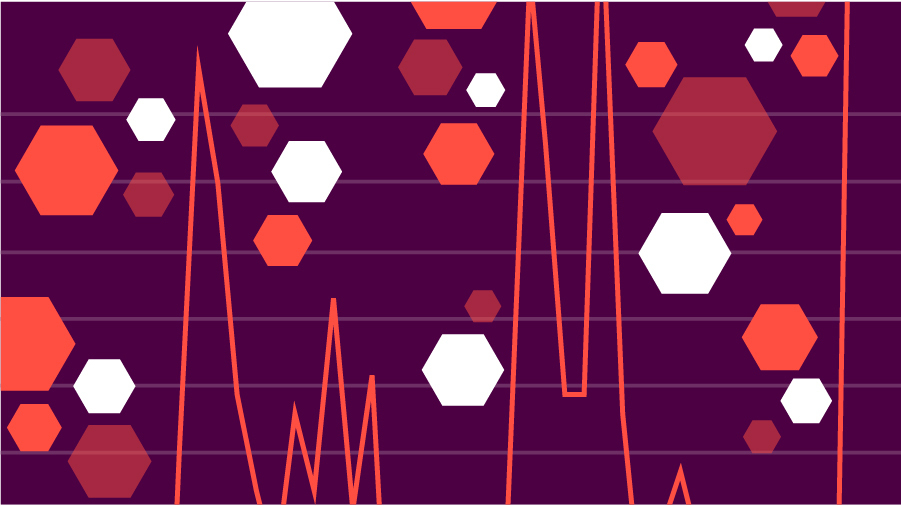 A flurry of vaccine misinformation has sprung up on social media following the recent Covid-19 vaccine announcements.

Over the past few weeks we have been besieged by a volley of headlines heralding the positive results of clinical trials of various Covid-19 vaccines. The news is encouraging. But the timing of the announcements — the first Pfizer announcement came only two days after Joe Biden was projected by media outlets as the winner of the US presidential election — combined with news stories that left us with more questions than answers has resulted in a flurry of vaccine mis and disinformation pervading an already vulnerable social media ecosystem.

On the back of our recent research report, “Under the surface: Covid-19 vaccine narratives, misinformation and data deficits on social media,” we examine some of the most potent narratives to have spread across social media following the recent vaccine announcements. We also detail how key gaps in the information space — data deficits — continue to be exploited by anti-vaccine and conspiracy theory communities. This comes just as online search interest in vaccines reaches its  highest point since Google Trends updated its data collection methods almost five years ago. 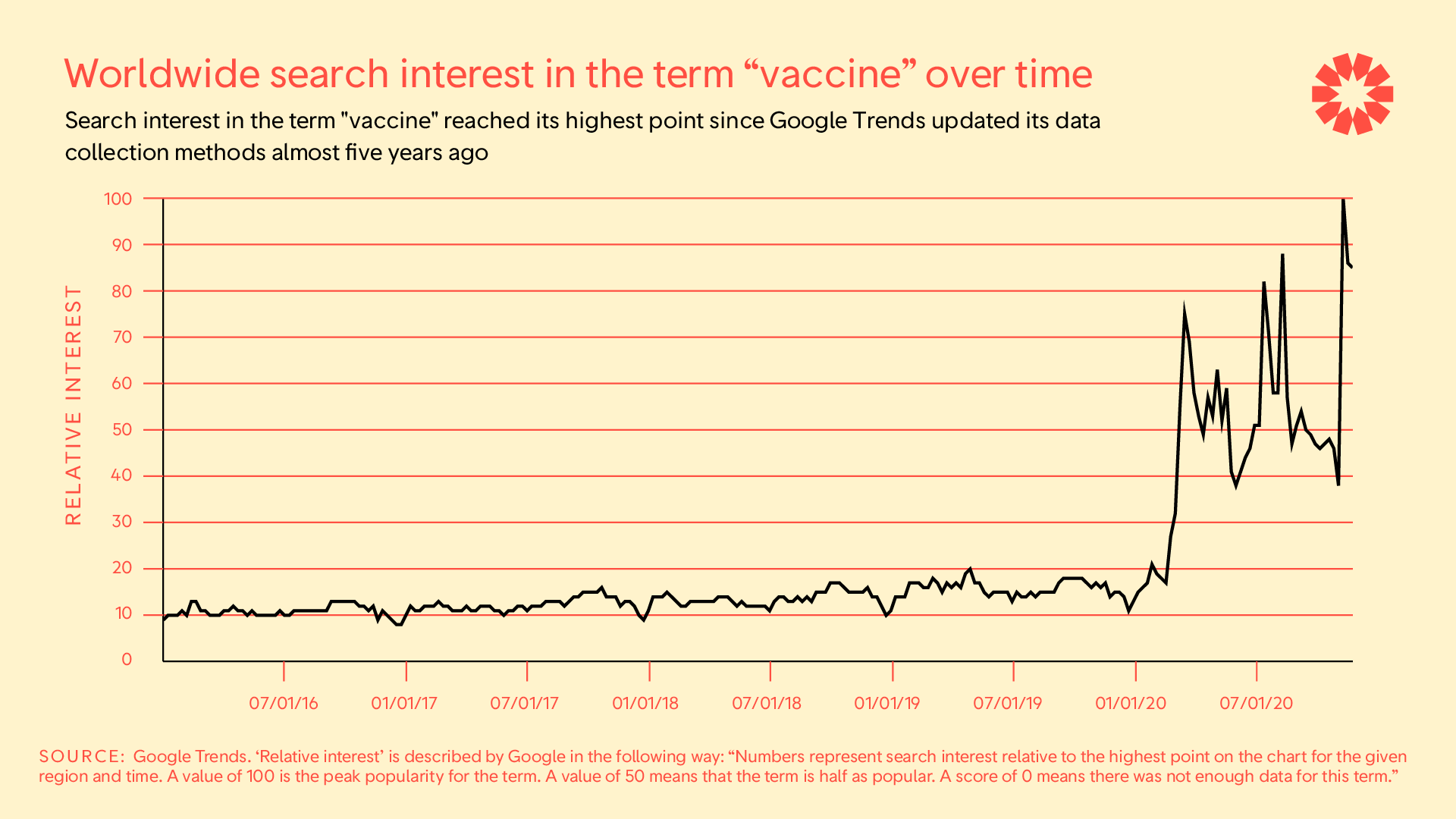 In the wake of the Pfizer, Moderna, AstraZeneca and Sputnik V announcements, the overarching narratives we identified in our recent report have persisted by adapting to the current context. Others, such as “Covid-19 vaccines are immoral: they are made from aborted fetuses,” which were less prevalent during the June to September period covered by our recent report, are now gaining significant traction on social media. Below we detail five narratives that have been particularly prevalent across social media in recent weeks.

1) A narrative that questions the necessity of the vaccine. The idea that a Covid-19 vaccine is unnecessary has proved popular on Anglophone, Francophone and, to a lesser degree, Spanish-speaking social media over the past few months. But whereas before these narratives leaned heavily on comparing the death rates from the flu to Covid-19, they are now leveraging direct comparisons of Covid-19 survival rates to the effectiveness of the current vaccines to suggest that our immune systems are more effective than vaccines in protecting us from Covid-19. Incidentally, this notion was found in a recent Gallup Poll to be one of the top reasons why Americans would not take a Covid-19 vaccine. 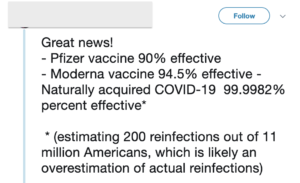 Moreover, the narrative that hydroxychloroquine’s effectiveness eliminates the need for a Covid-19 vaccine, highly popular among many Francophone communities, has been applied to recent vaccine trial announcements. The effectiveness of AstraZeneca’s vaccine reportedly stands at 70 per cent; hydroxychloroquine-based treatments are incorrectly claimed to be more than 99 percent effective. This narrative is also often extended to suggest that vaccines are financially driven, as hydroxychloroquine is an inexpensive drug. 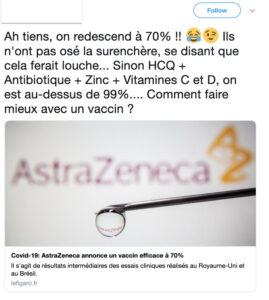 2) A narrative accusing pharmaceutical companies, politicians and other key figures of being driven by profit rather than public health concerns. The recent spate of vaccine announcements has done little to counter this narrative, which continues to resonate across English, Spanish and Francophone communities. Many posts attacked pharmaceutical companies, suggesting their announcements — and their quick updates on them — were a way of gaming stock prices. News of Pfizer CEO Albert Bourla selling millions worth of shares on the day Pfizer announced its vaccine breakthrough has been used as further evidence of “big pharma” corruption and its profit-above-all motivation. Widely shared claims that Bill Gates will profit from the new Moderna vaccine further demonstrate how overarching narratives persist by adapting to the present context. The ongoing presence of this narrative demonstrates how online attacks against Gates are less conspiratorial and more focused on his political and economic interests, as well as his overall credibility and trustworthiness as a public health expert.

3) Baseless claims that media outlets are working in concert with pharmaceutical companies. This narrative, already dominant within Francophone social media, is now appearing in Anglophone spaces. Posts amplifying the narrative underline claims that the media is only running articles favorable to vaccines and not contextualizing some of the limitations of the studies, such as what constitutes effectiveness and potential safety risks.

4) Groundless suggestions that mandatory Covid-19 vaccines will be used for population control. Different conspiracy theory-related posts on social media have intertwined in this narrative. Some suggest that the military is going to intervene to enforce mandatory vaccinations as part of a plan to control populations. Other posts assert that governments are programming populations with “fear, altruism and patriotism” to get people to take vaccines. Other posts claim that Covid-19 is a way of ushering in the “great reset,” or a transhumanist new world order, of which vaccines are an important component. 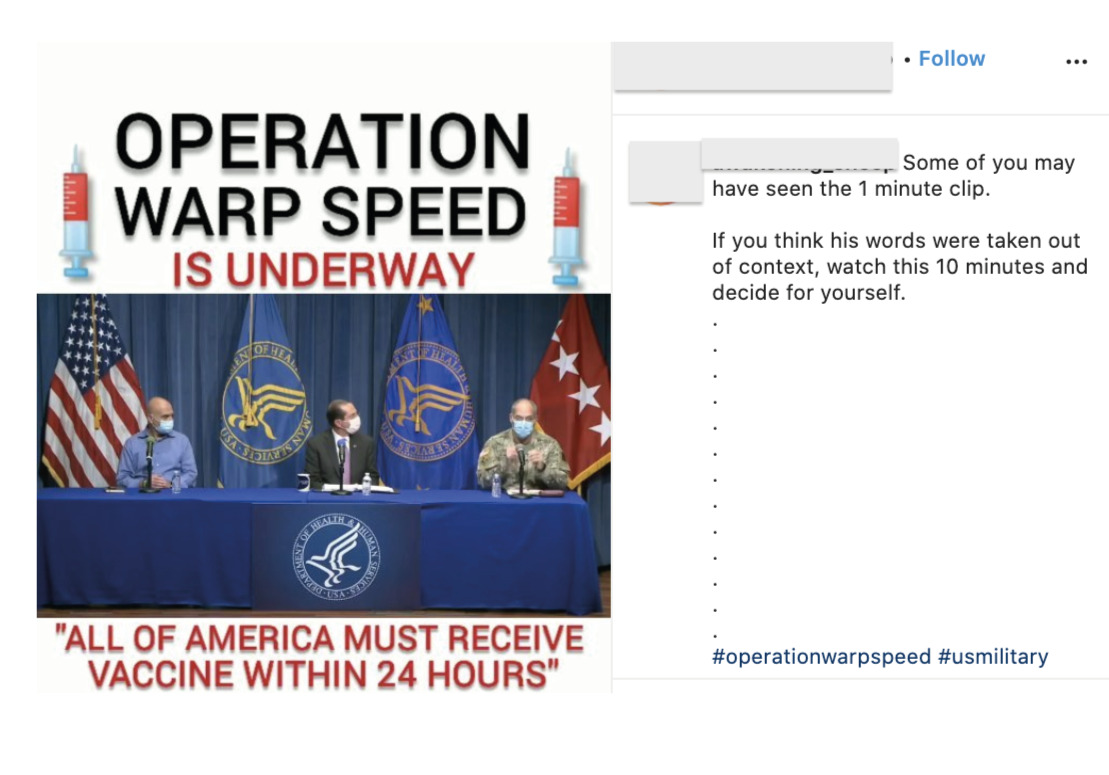 5) A narrative that Covid-19 vaccines are immoral because of their alleged ingredients. A debunked narrative that Covid-19 vaccines are made from aborted fetuses, long used by anti-vaccine communities to formulate morality-based arguments designed to resonate with more “mainstream” communities, has cropped up again on social media to undermine the Pfizer, Moderna and AstraZeneca vaccines. Neither the Pfizer nor the Moderna vaccine used fetal cells in the production process. The AstraZeneca vaccine did use the cell strain HEK 293, a derivative of cells taken from an aborted fetus in 1973. Those cells, however, were cloned and used in the vaccine’s development, a common practice. The vaccine does not contain fetal cells.

The flood of recent news stories highlighting the results of Covid-19 vaccine trials has amplified data deficits — situations where demand for information about a topic is high, but the supply of credible information is low. As we know, data deficits can be exploited by bad actors and filled with mis- and disinformation,  complicating efforts to make sense of the vaccines’ development. Here we outline some of the most notable data deficits that had previously been identified, but are still proving particularly susceptible to mis- and disinformation.

1) mRNA technology, DNA alteration and foreign propaganda narratives. Because of mRNA vaccines’ novelty and technical complexity — as well as the geopolitical stakes associated with Covid-19 vaccine development — accessible, compelling information on this technology is particularly difficult to provide, while the incentive for bad actors to exploit it is high. mRNA has been a crucial area of vulnerability within the information space and continues to be filled with mis- and disinformation. 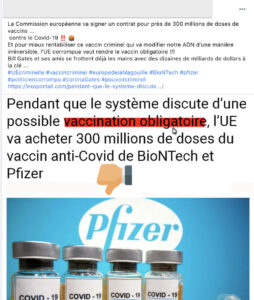 Numerous posts claim that the Moderna and Pfizer vaccines will alter people’s DNA and may even be part of a wider eugenics program or transhumanist dystopia. Several identical versions of posts advancing these claims, linked to “explainer” videos on uncensored platforms such as Odysee or Telegram, have been spread by a number of accounts, often in quick, simultaneous spurts on large Facebook Groups. Such disinformation tactics employed by anti-vaccine and conspiracy theory communities could heighten the risk of wider, more populous online communities being subjected to such content.

Several articles published or translated by websites dedicated to the amplification of foreign actors’ narratives — and even some identified as “key players in [foreign actors’] disinformation and propaganda ecosystem” — have also exploited this data deficit. By pointing to the mRNA technology employed by Pfizer’s Covid-19 vaccine, articles in both French and English have framed the vaccine as “experimental” and even part of “eugenist policy” and a regime of “vaccine terror.” Others claiming to reveal “what is being hidden around the Pfizer vaccine” are strategically filling in these data deficits with falsehoods and spreading these articles on social media.

2) Measures of vaccine “effectiveness”, trial stages’ “interim” results and other limitations of the vaccine announcements. Over the past few weeks, headlines have been awash in announcements about the “effectiveness of vaccines.” But these headlines are often only composed of percentage figures. They have opened the door for a race to the top, where the absence of crucial contextual information enables vaccines in different stages of the development process to appear to be on a level playing field. The 90, 92 and 95 per cent figures slapped onto the Sputnik V vaccine within the space of two weeks following Pfizer’s updates to its own vaccine’s effectiveness serve as an example. 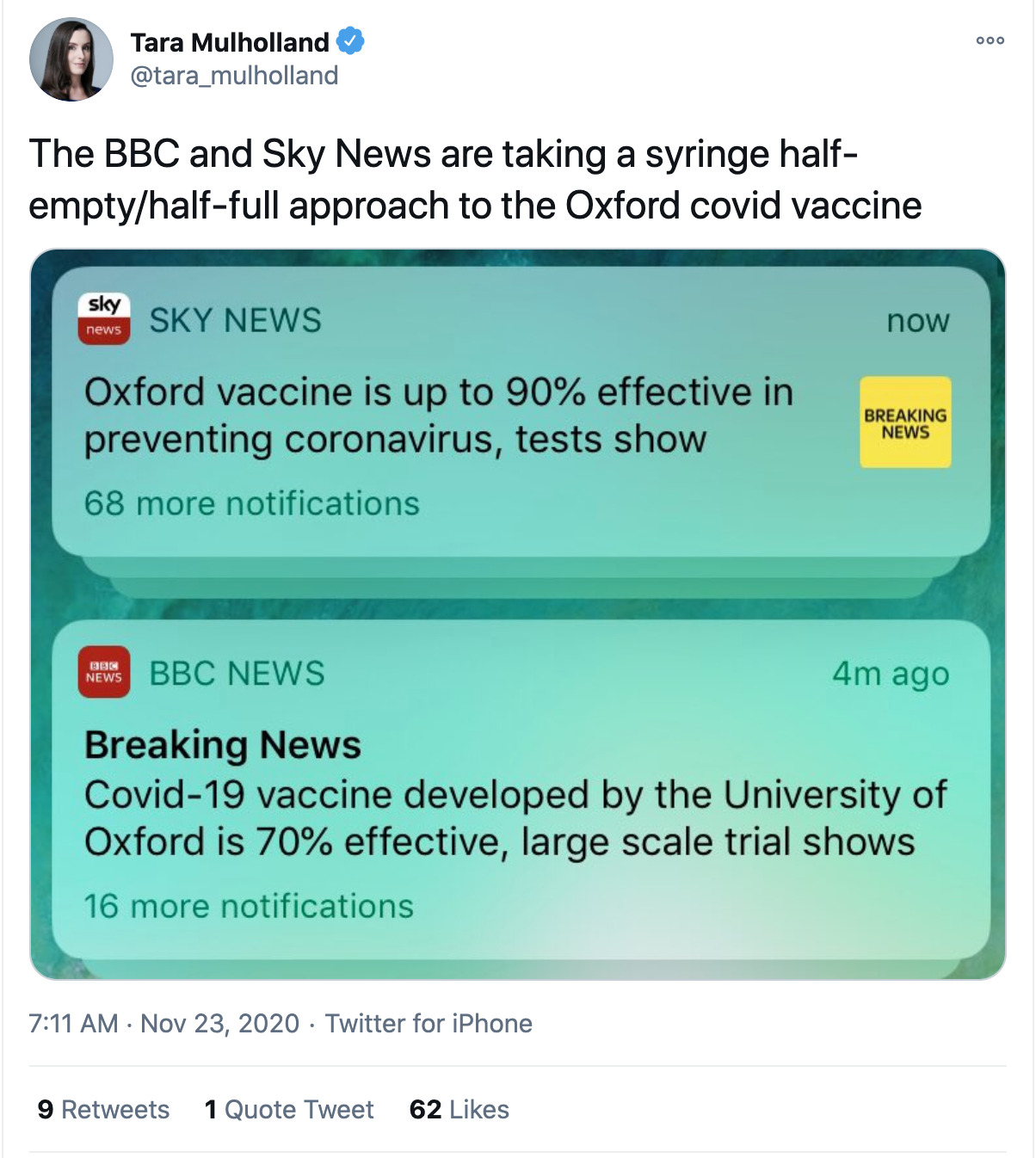 Furthermore, very little of this reporting has unpacked the limitations of the current studies. These include, among other things, what “effectiveness” means, how it differs from “efficacy” — a crucial distinction — the different objectives against which effectiveness can be measured, and for how long the vaccine might be “effective.” While the efficacy of the vaccines — how they perform in clinical trials — is promising, little is known about the vaccines’ effectiveness — how well vaccines perform in the real world.

Equally, very little current reporting explains how current trials are not looking at whether these vaccines will reduce the likelihood that individuals in different risk groups will die from Covid-19 or how the emergency use of these vaccines could jeopardize the ongoing trials which would be able to tell us how well the vaccines perform.

There are still a lot of unknowns about these vaccines, and they aren’t necessarily being acknowledged in news articles. And as we know, people don’t like ambiguity. This is when the rumor mill kicks into gear and misinformation runs rampant.