How newsrooms can protect female reporters on social 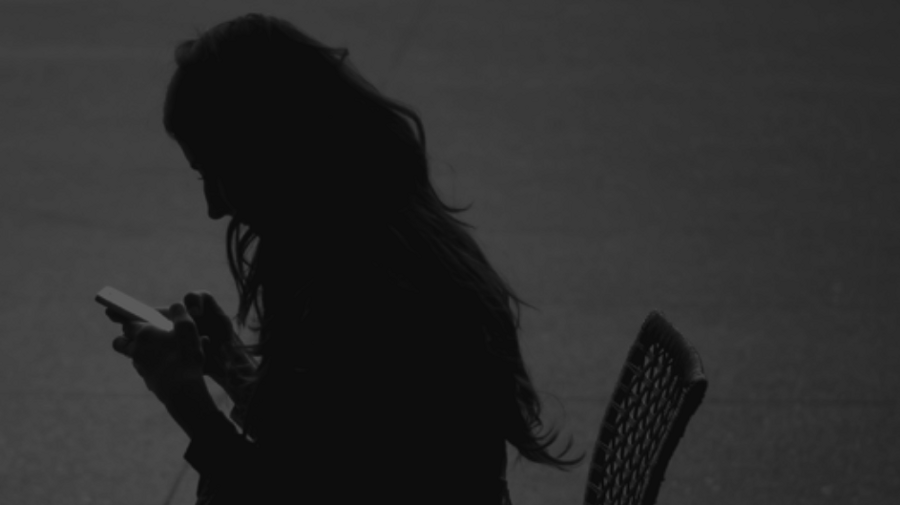 Attacks levied at men, while hurtful, are generally less personal and threatening of their personal safety than the attacks women receive

Sourcing eyewitness accounts and user-generated content from social media is something I have been doing for several years, and it is always done with due care and consideration, both for the circumstances the uploader may be in, and in terms of respecting their intellectual-property rights. While there are always outliers, most people are polite when it comes to discussing what they’ve seen and recorded, and in giving permission to media, or entering into a licensing arrangement.

However, the public nature of this engagement does leave the journalists who do it open to abuse. During our work on the Finsbury Park Mosque attack of June 19, I experienced firsthand just how vitriolic and misogynistic these personal attacks, on Twitter especially, can be, and how ready people are to respond to misinformation, and to always assume the worst motives from journalists, no matter how ignorant of the facts of a matter they are.

Among the sources I engaged on Twitter was @Known_As_H,  or Didier, who was among the first to share video of a man being held by officers at the back of a police vehicle, an alleged “racist bastard (who) ran over innocent civilians.”

This racist bastard ran over innocent civilians on their way home from taraweh #FinsburyPark pic.twitter.com/YHvsVZHqIY

Didier did not respond to my approach for information, but the request I made drew hundreds of unwelcome replies. Due to Twitter’s 140-character limit, my message was split in half and it was the latter section of my message that was misconstrued and targeted: “broadcast with credit to you per storyful.com/clearance Thanks, take care. Esther [email protected]”

Whether it was the truncated grammar or lack of context, Twitter users were quick to question my methodology.  It was assumed that this was my informing the uploader that their video had already been used, without seeking permission. Whereas, in truth, the full message read: “Hello Didier, are you alright? Hope you’re safe. Esther here from Storyful news agency. Is it ok to share this video on news websites/broadcast with credit to you per http://storyful.com/clearance  Thanks, take care. Esther [email protected]” 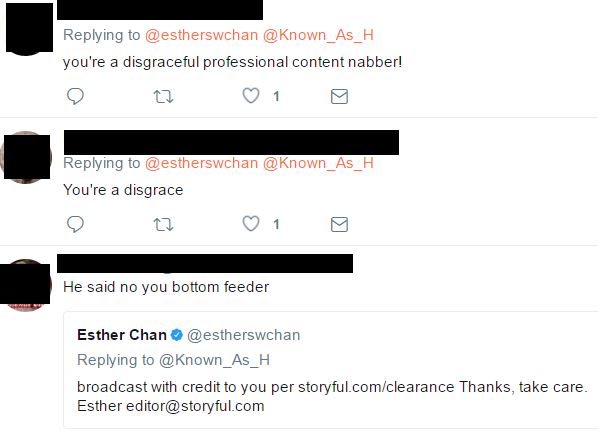 I realised that the two tweets in question could have been better aligned via the Reply function, yet the true context remained easily identifiable, if people cared to look before they leaped into attack mode. That they did not tells you much about the habitual mode of interaction on Twitter, one that places journalists in the firing line of  trolls for simply trying to inform the public while respecting eyewitnesses’ ownership of their content.

Furthermore, the Storyful clearance agreement, attached to the second part of my message, states clearly the conditions of use: “Storyful always asks that partners credit any source when they use the content we make available to them”, but this was ignored.

The criticism over media ethics and copyright quickly turned into personal attacks.  Angry tweets flooded in describing me as a “vulture,” gorging on the dead, while others told me I should be “ashamed of myself,” that I was “disgusting” and should be sued. The abuse intensified into the night and the next day, with some comments revolving around race – “You Asian slut” – and other more generic slurs based on appearance. A worried colleague told me the tweets targeting me had posted to Reddit, where hot topics and viral content are shared and widely discussed among 234 million monthly users.

While my Twitter feed is a business account with somewhat of a separate persona, the intensity and longevity of the vitriolic abuse became unbearable. Perhaps most importantly from the point of view of female journalists,  more than two-thirds of the commentary revolved around my being a woman. Accusations levied at men, while just as hurtful, are generally less personal, and less overtly threatening of their personal safety.

While breaking news, I’ve had requests to go on dates, bare my body, and even had online marriage proposals. Situations such as these are often comical, but they should serve as a warning for any female when it comes to their personal safety, especially when covering stories in the area where they live.  Female journalists are naturally more vulnerable from a physical standpoint, and suggestive or flirtatious behavior should be avoided at all costs to sever potential negative outcomes from the outset.

Eyewitnesses accounts posted to social media are now an important, at times indispensable, part of news reporting.  While journalists bombarding witnesses with requests may not, at times, make for a very edifying spectacle, those reporters are almost always acting in service of a public good, namely, journalistic transparency and accuracy; they should not be asked to put their reputations and personal safety on the line while doing so.

As such, how reporters engage with social media users online is a twofold problem, though both aspects are related. The aforementioned sight of reporters crowding a person’s timeline with repetitive clearance requests clearly points to a need for both the media industry and the platforms to consider working together towards a more private, more considerate approach to the seeking of media clearances for newsworthy social content.

First and foremost, we want an environment in which the rights of content owners are respected and protected, and the only way to ensure that is to ask those content owners for their permission to use their content. This is, contrary to what some social media users believe, the correct and ethical approach. The alternative is something Storyful has always fought against – the unauthorized use of social media users’ content.

However, our main focus here is on the rising problem of abuse faced by reporters who do that public outreach. At the moment, it is up to each newsroom to protect the safety and reputations of its staff by giving them the confidence, work practices and tools needed to do their job safely, and with due courtesy to the social media user.

At Storyful, in the face of some shocking abuse aimed at our reporters, we have provided the option of using a company account, rather than a personal account, for engagements on Twitter.

We also encourage, wherever possible, that outreach be done via private messaging, or over the phone. Such means of communication are often easy to find, and news organizations should provide reporters with the training, tools, and resources needed to use them.

An ideal scenario may one day allow for the automated blocking of messages that include certain harmful keywords, or simple more effective policing of such behaviors. But for the time being, reporters need the protection of their organizations.