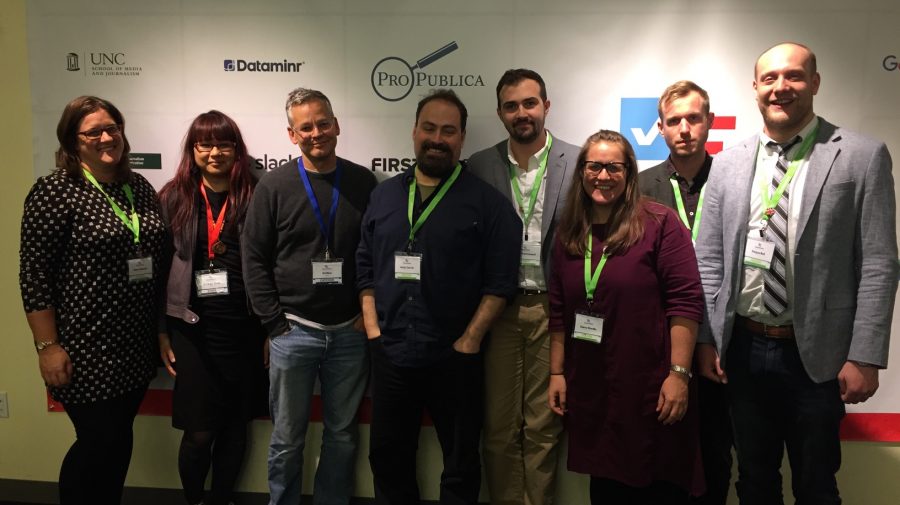 Claire, pictured far right, with some of the First Draft team, after a very long day monitoring social media for the Electionland project. 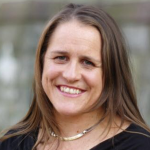 After a wonderful eighteen months at the Tow Center for Digital Journalism, I am leaving to work full time with First Draft. My focus will be on building a research agenda for the First Draft Partner Network and establishing First Draft as a non-profit (501c3) in the US. I will also be seeking additional funding to ensure we continue to thrive. I’ll be doing this from New York, employed by Meedan, a First Draft founding partner and an all round group of amazing people.

I’ve really enjoyed my time at the Tow Center but a good research director’s main role is to facilitate and supervise the work of others. I’m now at a point where I want to take on my own project – working with First Draft on issues surrounding trust and truth in the digital age.

I’ve been fascinated by social newsgathering since late 2005 when I started researching how the BBC handled user-generated content. I spent time with the BBC’s Breakfast show team, watching emails coming in from the audience during the show, and talking with journalists about the ways that audience contributions were impacting their work.

Eleven years later, the landscape is in some ways unrecognizable. Journalists and audiences alike have to navigate information, photos and videos shared by ‘unofficial sources’ on the social web, often created, posted and consumed on mobile phones that are more powerful than the computers the BBC journalists were reading those emails on in 2005.

But the landscape is also depressingly similar. One of the biggest challenges for BBC Breakfast was PR agencies and activist groups creating ‘fake’ untraceable hotmail addresses, pretending to be audience members who had a ‘story to tell’. Journalists I interviewed talked about the opportunities they were seeing from audience emails and SMS messages but also the struggles of verification.

Prior to joining the Tow Center, I co-founded Eyewitness Media Hub with Pete Brown, Sam Dubberley and Jenni Sargent. We wanted to deepen understanding around the impact and implications of individuals, unrelated to a newsroom, capturing and contributing defining photographs and videos of a news event. In 2014 and 2015 we undertook a series of research studies exploring the ethical, legal and logistical issues for journalists, and the attitudes and expectations on audiences. Our findings demonstrated that there was some way to go in terms of improving verification skills and standards across the news industry, and provided evidence that audience trust was waning.

There was noticeable momentum building around these concerns and in June 2015, Eyewitness Media Hub became a founding partner of the First Draft coalition, joining together with eight other organizations and projects to provide training and guidance in social newsgathering and verification. Within the first year, we recognised that our work was becoming much more relevant and urgent. Not only for newsrooms, but for everyone involved in the news digital ecosystem, including the social networks and their users. So in September this year, we launched the First Draft Partner Network, inviting prominent news, human rights and social technology organisations (including Facebook, Twitter and YouTube) to work with us on developing realistic and actionable solutions to common challenges. Demand to join the network has been overwhelming and part of my work with First Draft will be to devise systems that ensure everyone who is eager to participate around the world can contribute to and benefit from Partner Network initiatives in some way.

With over 80 partners confirmed, we scheduled three meetings for late November and early December in New York, London and San Francisco (“after the craziness of the election has subsided” we said). Little did we know how much we would have to discuss.

The meetings were designed to bring partners together to discuss which challenges to prioritize, and to agree concrete actions that we could take in 2017. The two meetings so far have included representatives from all the technology companies, newsrooms, human rights organizations, and fact-checking sites from around the globe. We’ve had participants in the room or on video conference from Argentina, Australia, Brazil, France, Germany, Greece, Switzerland, Ukraine, Qatar and the Philippines.

We believe very strongly that the issues related to trust and truth, particularly those that are currently being discussed so vehemently, can not be solved entirely by the social networks. They require collaboration from a news industry that is realizing the entrenched history of competition is not helping to solve these issues. Having hundreds of journalists at hundreds of news organizations all verifying the same video from a breaking news event is wasting time that could be spent on investigating why it happened in the first place. Having hundreds of journalists reaching out to the same eyewitness on social media is undermining trust with audiences who often call out the ‘vulture-like’ behavior.  While newsrooms are doing their best with dwindling resources to train journalists in verification techniques, mistakes happen. Failing to share debunked information with each other means that every time false information or content circulates from a news organization the audience’s trust in journalism weakens.

There is so much that we can learn from each other, and one of the first steps is to acknowledge and share learnings from some of the many brilliant initiatives already underway by many of our partners.

Next week, after our final meeting we will be publishing our action plan for 2017. I already know it’s going to be a very busy year.