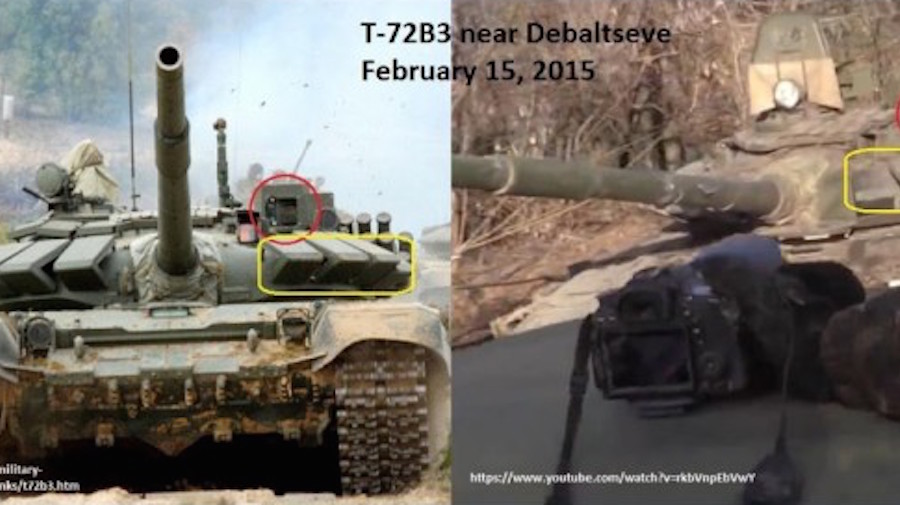 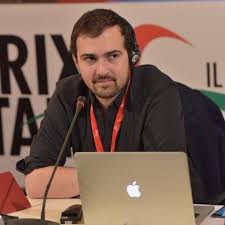 Back in February 2015, the citizen investigative journalist project Bellingcat decided to launch an ambitious investigation into military vehicle sightings in conflict-stricken eastern Ukraine.

Amidst competing claims from powerful international leaders over who was involved in the conflict, one thing was certain: Hundreds upon hundreds of reported sightings of heavy artillery across the region were being uploaded to YouTube, Twitter, Facebook, VKontakte and other social networks.

Sifting through the reports, verifying and geolocating each sighting posed a monumental challenge — especially for a small group of volunteer investigators.

Bellingcat, however, had a plan: using Checkdesk, they sought to open the investigation to their wider community and let their cadre of followers get involved in the newsgathering and verification process.

The first challenge in the investigation was to gather as many of the reported sightings as possible into one place — no small task given that they were dispersed across a half-dozen different social networks, and cross-network re-sharing often made finding the original post a challenge in and of itself.

On Checkdesk, Bellingcat decided to use a handful of Stories as a workbenches for the task. On the platform, each Story serves as an anchor around which people can focus their energies and help move the investigation along. 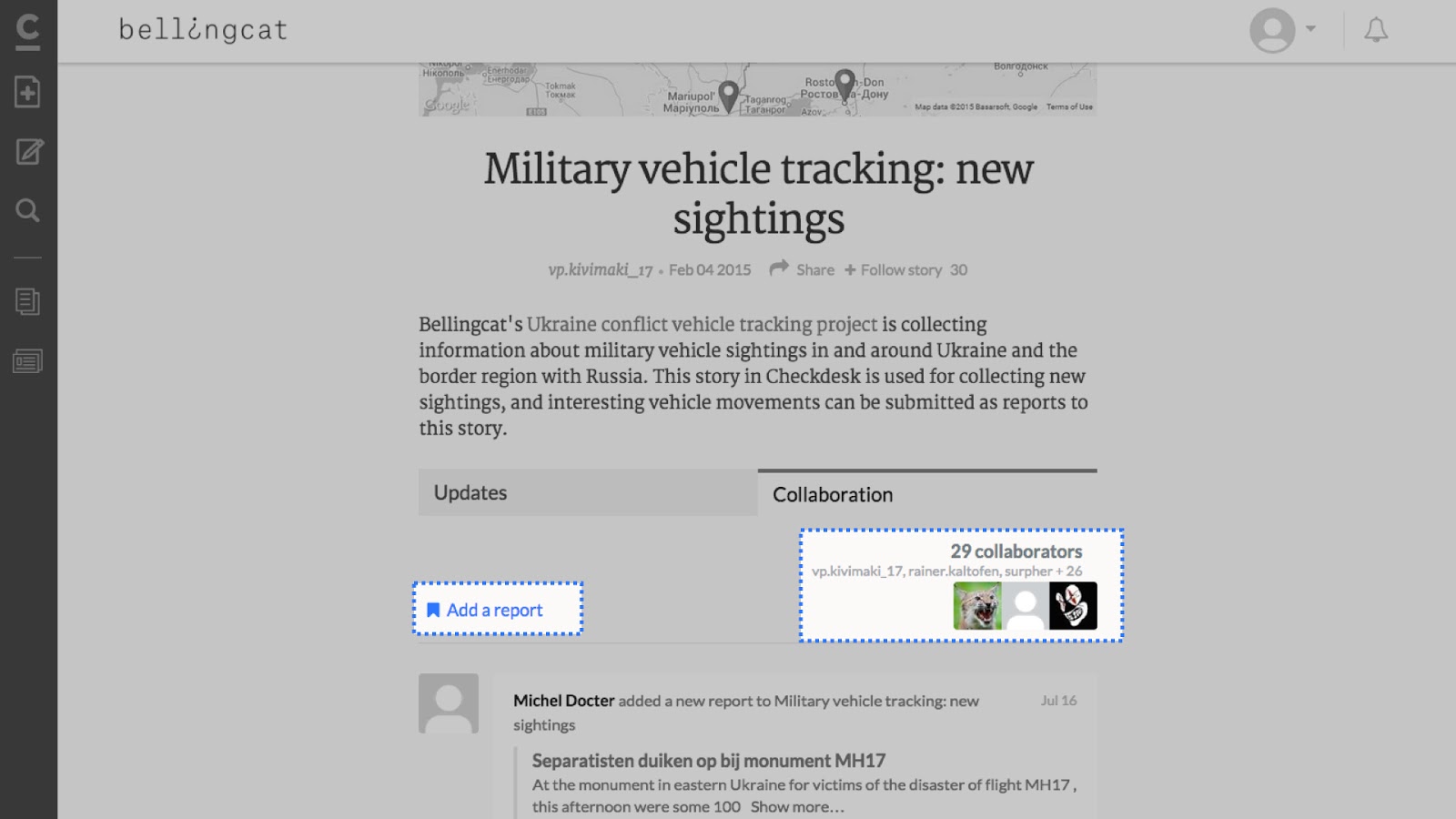 Registered users can add a Report to every Story on Checkdesk. A Report might be an image, video, Tweet or URL that they want to focus their energies around. These aren’t published right away, but they drop into the Collaboration tab for others to see [see screenshot below]

Any registered user on Bellingcat’s Checkdesk can add a report — any link, most often YouTube videos, tweets, or photos — for further analysis, and so Bellingcat’s community got to work. 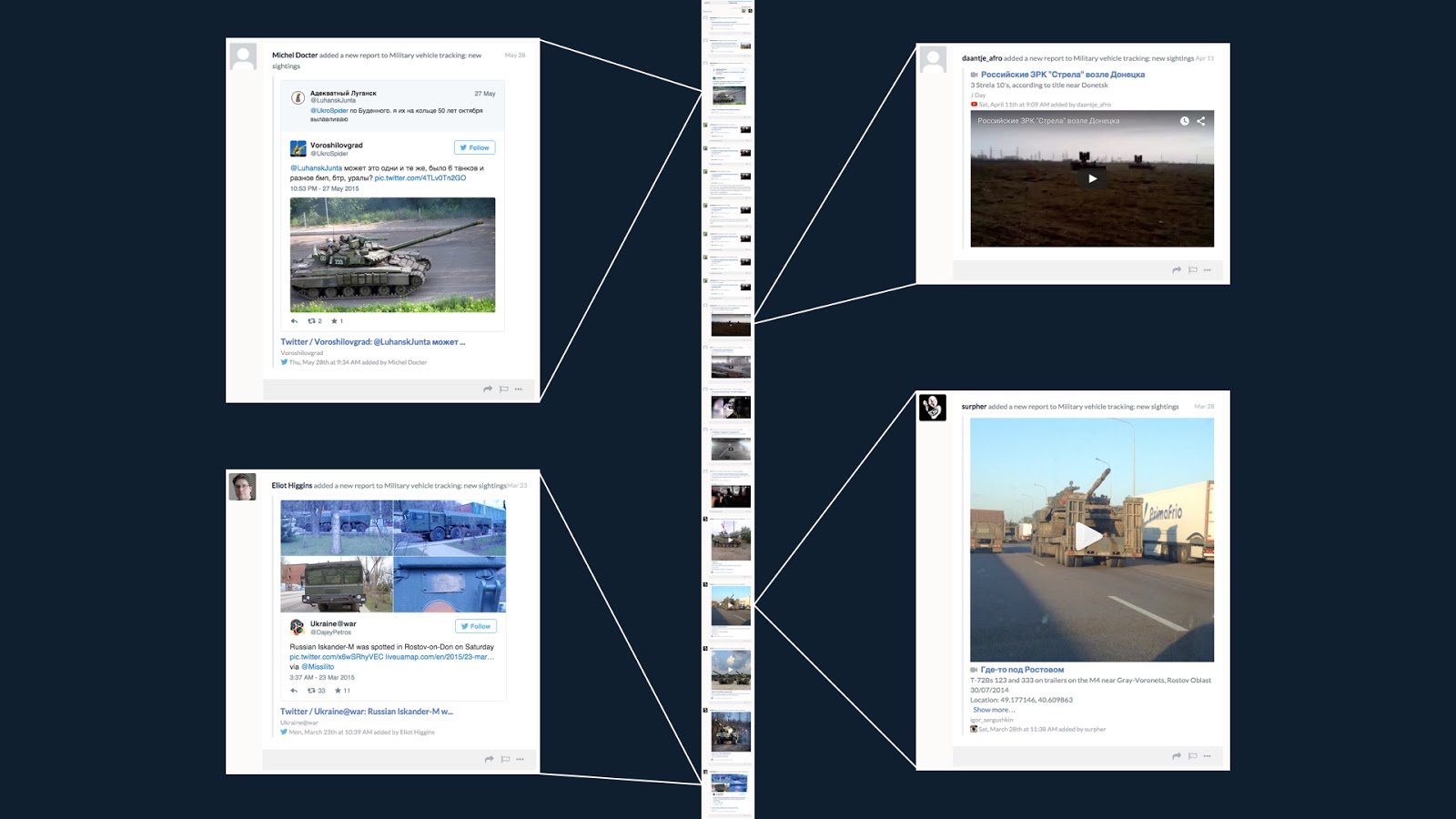 In this extended view of a Story, we can see pull-outs of four different sightings added by four different users. This is collaborative newsgathering in action

Gathering all the sightings into one place was the easy part. Now, the reports needed analyzing and investigating. In Checkdesk, that too can be a collaborative process. Let’s take a look at one example:
In the below report, we can see five different people gathering round one 30-second video. The verification footnotes show how the collaboration and investigation into the details of this report evolved. This is collaborative verification in action. 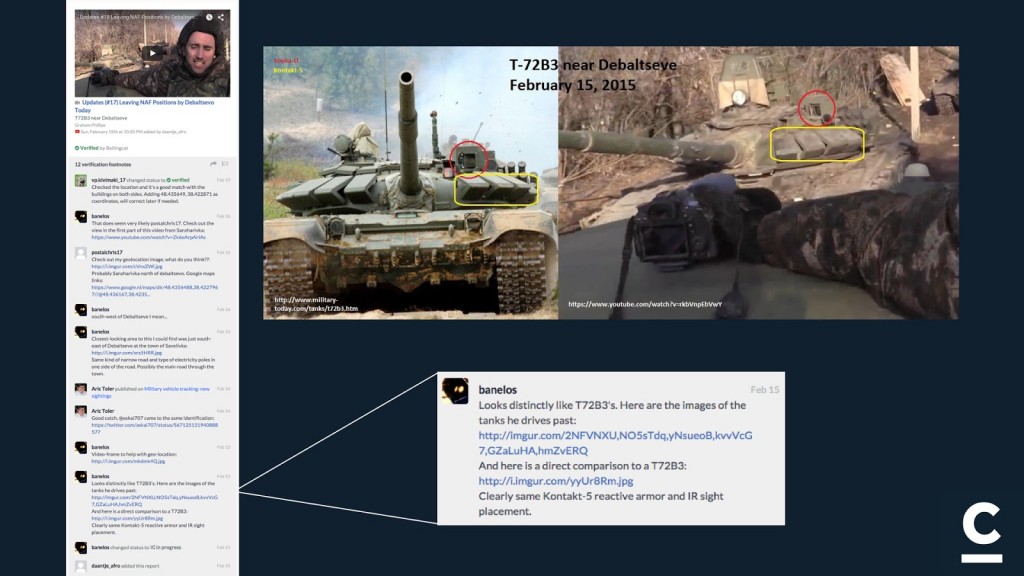 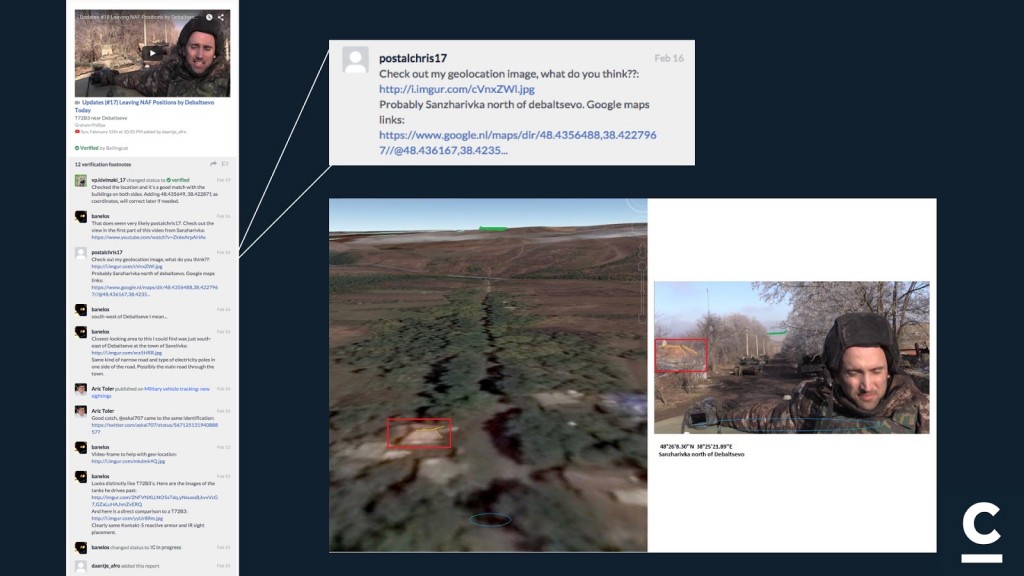 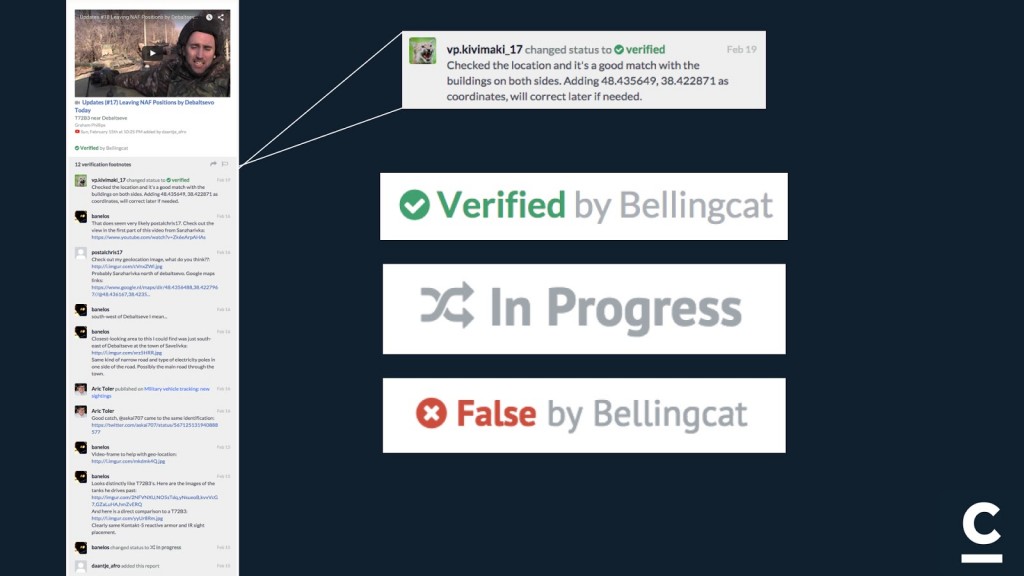 Not only do the verification footnotes here serve the purpose of enabling collaboration around checking the report, they also provide a record of the steps the community took to verify it.

For a community like Bellingcat, this transparency is crucial. If, as a reader, I saw no footnotes and only the statement “Verified by Bellingcat”, I’d have only the word of the organization to trust that status. But by showing their work in such a clear and transparent way, we can retrace these five volunteer investigators’ steps and see if we can replicate their findings.

In fact, as the footnotes show, the community often replicates its own findings, with one user checking banelos’s weapon identifications conclusions, and two others checking postalchris17’s geolocation work.
Anthony De Rosa has written eloquently about why newsrooms should embrace some of this “show your work” ethos, and we believe it is particularly important when it comes to eyewitness media and unverified user-generated content.

The caveat that “This media couldn’t be independently verified” may be useful to cover newsrooms’ liability, but it does little to help readers understand what work has been done to verify a report, or even what steps can be taken in that regard.

This is particularly true during breaking news stories, when rumor and misinformation abound. In Checkdesk, it’s okay if you don’t know everything to verify a report all at once — you can clearly show work on the report is “In Progress”, and you can document the steps you’re taking (or the questions you’re asking) to better establish whether something is verified or false.

Over the course of February and March this year, Bellingcat’s volunteer community gathered 441 reports, contributed and investigated by 32 different users.

Based on this work, they produced an incredible dataset that provides clear and robust documentation, directly challenging the claims of one of the most powerful men in the world.

We believe there is an opportunity for newsrooms to follow this lead. As Josh Stearns notes in a recent First Draft piece directly advocating for this kind of collaboration:

“My experience working at the intersection of journalism and communities is that people are hungry for tools and strategies to better identify trustworthy news and information and how to sort through the flood of info they face, especially around crisis, disasters and controversial issues in their communities. […]

“In crisis moments, when the facts are a matter of life and death, we should be glad to have more boots on the ground, and we should lead by example and then engage our communities to help us shine a spotlight on the truth.”

Other ways to collaborate

At Checkdesk, we seek to support exactly this kind of collaborative, public newsgathering and verification. But Checkdesk certainly isn’t the only space where initiatives like this can take place. Here’s a handful of other great examples of collaborative verification we’ve seen in recent years:

At the start of the Arab Spring — around the exact same time we at Meedan were thinking about how to adapt our collaborative approach to translation for verification — Andy Carvin was pioneering collaborative investigation into eyewitness media on a daily basis.
This mammoth community-powered probe into claims of Israeli weapons falling on Libya is an incredible example of how the highly open nature of Twitter can be used to great effect for collaborative verification.

Starting in 2013, Storyful managed to do what few thought was possible: They found a real practical use for Google+.

The Open Newsroom has been an excellent example of community newsgathering and verification that not only served to verify or debunk content from a vast array of stories, but also provided an excellent opportunity for community members to learn from Storyful’s crack team of verification pros.

Bringing us into 2015, and using new collaborative work tools like Slack, Grasswire is pushing to blow open the full scope of the reporting process for community engagement. The Grasswire Slack newsroom is a hive of activity around the clock with a rapidly growing team of over 240 people dropping in story ideas, developing reportage, and verifying content.

Again, it’s a great place to practice the verification tips you read about each week on First Draft. 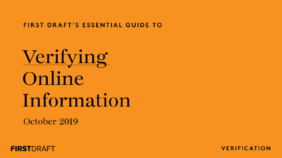 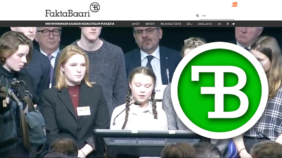