10 years of CNN iReport: Handling eyewitness media is still a tricky business
First Draft uses cookies to distinguish you from other users of our website. They allow us to recognise users over multiple visits, and to collect basic data about your use of the website. Cookies help us provide you with a good experience when you browse our website and also allows us to improve our site. Check our cookie policy to read more. Cookie Policy. 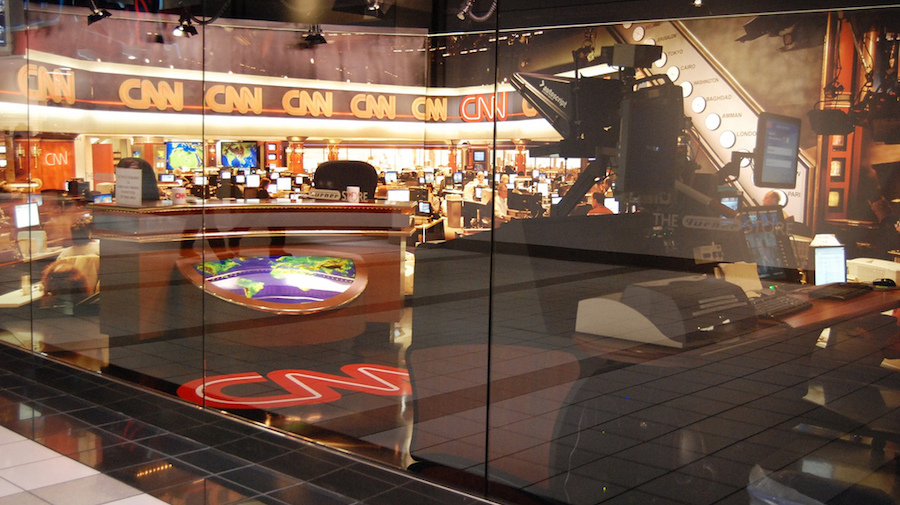 When Seung-Hui Cho opened fire at staff and students on the campus of Virginia Tech in 2007, graduate student Jamal Albarghouti didn’t run. In an act which is now a mainstay of breaking news events, he pulled out his cameraphone and started filming.

CNN iReport had launched some seven months earlier as a simple web page for members of the public to share pictures and video, and Albarghouti uploaded his footage of police storming the campus building amid the sound of gunfire to the CNN site.

That horrifying day at Virginia Tech was the deadliest mass shooting in modern US history until the recent massacre in Orlando, and Albarghouti’s video became a key part of the media coverage in a way that had never been seen before. The fact that such imagery is now almost expected whenever tragedy strikes is a hallmark of how much has changed. 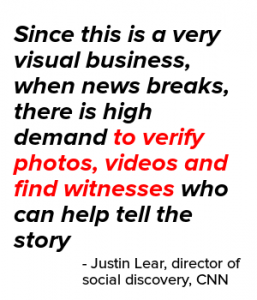 It is now ten years since iReport launched, in August 2006, and the Virginia Tech story – along with Albarghouti’s footage – “put CNN iReport on the map”, says CNN’s Justin Lear, the broadcaster’s director of social discovery.

More and more iReport contributors signed up to share imagery from breaking news events, from their lives and communities, or in response to specific call-outs from journalists in a way that now forms a large part of how many news organisations interact with their audience.

“As iReport evolved over the years, we have seen an increased interest and need in becoming part of the global conversations of stories that matter to our audience,” Lear told First Draft via email.

User-generated content (UGC) and eyewitness media have become ever-more central to breaking news coverage and the iReport team at CNN has now morphed into a global unit for social discovery, tasked with finding and verifying imagery and reports around the stories of the day.

“Since this is a very visual business, when news breaks, there is high demand to verify photos, videos and find witnesses who can help tell the story on TV and for CNN Digital.”

Watch: Claire Wardle details verification as a process – with tools and tips

But despite its standing as one of the first news organisations to address the new phenomenon of eyewitness media with a dedicated team, CNN still struggles with some of the challenges involved in the process of sourcing UGC.

Being such a large organisation, multiple CNN reporters sometimes contact the same eyewitness in the chaos of a breaking news event, adding to the pressure an individual may feel after going through something potentially traumatic.

And CNN journalists reaching out to eyewitness have experienced backlash from other social media users for a perceived lack of sensitivity. While it is a necessary part of the process in reporting the news, such a backlash can be damaging to the hard work of engagement teams who build a news brand’s presence on social media. 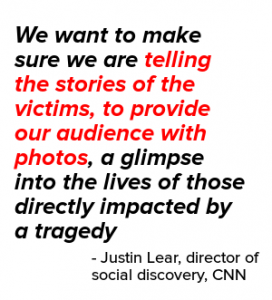 CNN is not alone in these practices and interactions with the public – far from it. These are challenges the news industry faces together in handling a part of the newsgathering process that has mushroomed in the space of a few short years. And the challenges are internal, as well as external.

“As news organisations see frequently during an event like a mass shooting,” said Lear, “it can be very mentally tough to look at video and photos taken at a scene during a horrific news event and hard to tell the stories of who the victims are.”

Identifying victims and verifying photos “can be a long process” which sometimes creates “a significant emotional reaction”, he said. Journalists and newsroom managers need to be aware of these risks, but it is vital in the reporting of stories with a significant societal impact and public interest.

“At CNN, we want to make sure we are telling the stories of the victims, to provide our audience with photos, a glimpse into the lives of those directly impacted by a tragedy.”

Social media producer Rachel Rodriguez is one member of the social discovery team, heading up social media strategy for CNN International, and as such she covers some of the biggest stories and speaks to eyewitnesses on a regular basis.

Rodriguez shared her advice and experience about the job at the recent news:rewired conference in London.

“The eyewitnesses you’re talking to are not professional journalists,” said Rodriguez. “They’re people who have possibly just been through a traumatic experience and you can’t talk to them the same way you would talk to one of your own correspondents in the field.”

The first question CNN journalists are trained to ask when talking to eyewitnesses in breaking news situations is if they are safe and well. If not, journalists “have no business” asking to use the footage, she said.

It is also important to not encourage eyewitnesses to take risks to provide footage as “they haven’t been through hostile environment training,” she added, as “they don’t have this type of equipment and security that we would have in the field.”

Even broadcasting something dangerous or illegal may inadvertently encourage someone to take risks, so the whole newsroom needs to be considerate to the new age where everyone with a smartphone can be a contributor.

It is a journalist’s and news organisation’s job to “cut through the rumours and craziness that people retweet on social,” Rodriguez said, “not to keep spreading it. So verification is really important.”

Talking to the eyewitness is the first step as doing so will not only help check if something is true, but also get the backstory “which is usually more interesting than taking whatever they put up”.

Other sources, pictures and video from the scene are also valuable in verification, she said, to see if everything matches up. And more technical solutions like checking metadata or online maps have “saved [CNN] from getting burned a few times”.

Using a fair dealing defense is appropriate in a minority of cases, but it has its own limitations in terms of how the footage is used, and for how long.

“For us it’s a matter of best practice,” said Rodriguez. “We really feel [fair use] is not ideal and we want to have a conversation with every person” who has newsworthy eyewitness footage, as it can make for a better story.

It is vital, however, to speak to the copyright holder – the person who physically captured the image or video – and not just someone who scraped the footage and re-uploaded it.

Rodriguez always wants to make sure eyewitnesses are credited for the footage they provide, and in the manner they want to be credited – whether that’s with a full name, social network handle or pseudonym.

The only time CNN would not credit a source is for safety reasons, she said.

During protests following the Iranian election in 2009, many eyewitnesses provided footage and were happy to be credited on screen. But was it safe to do so?

“This is another situation where, as professional journalists, we have to bring our own professional judgement to the situation,” said Rodriguez. “People on the ground in Iran didn’t know in that case if the government was using social media to hunt down protestors and arrest them.”

Transparency is crucial on social media, Rodriguez said, especially around the verification status of footage or particular stories.

“[Social media] users respect you a lot if you say ‘here’s a video, here’s what we know about the situation and here’s what we don’t know because it came in from a user’,” she said.

Transparency can give more context to a developing story, but it is also important when dealing with graphic images.

When a police officer shot Philando Castile in early July, his girlfriend broadcast the grisly aftermath on Facebook Live. The footage was an important insight into race relations in the US, but Rodriguez said journalists need to give their viewers the choice to view something graphic, especially when videos can play automatically on social media.

“We edited it so there was a long warning at the beginning to give [viewers] the time to decide, even with autoplay, if this was something they wanted to see or not,” she said.

Speaking to an eyewitness before using the footage can provide context and background, but Rodriguez stressed returning to the contributor and their community to thank them and show how the the footage was used.

Closing the loop will “encourage loyalty and encourage people to keep sharing these kind of breaking stories on social,” she said, “so it’s important for us to go back and do that last step.”

“We have a dedicated social team but because everyone chimes in on breaking news we really feel strongly that the whole newsroom needs to understand how you go about doing this,” said Rodriguez.

“It’s only going to become a bigger thing in the future so everyone needs to get the process of best practice for doing this.”

She said it is also important to provide support for staff on social media, whether around talking to eyewitnesses in dangerous situations, receiving abuse, or accidentally viewing graphic images.