4 ways technology could helps solve problems in newsgathering and verification
First Draft uses cookies to distinguish you from other users of our website. They allow us to recognise users over multiple visits, and to collect basic data about your use of the website. Cookies help us provide you with a good experience when you browse our website and also allows us to improve our site. Check our cookie policy to read more. .

4 ways technology could helps solve problems in newsgathering and verification 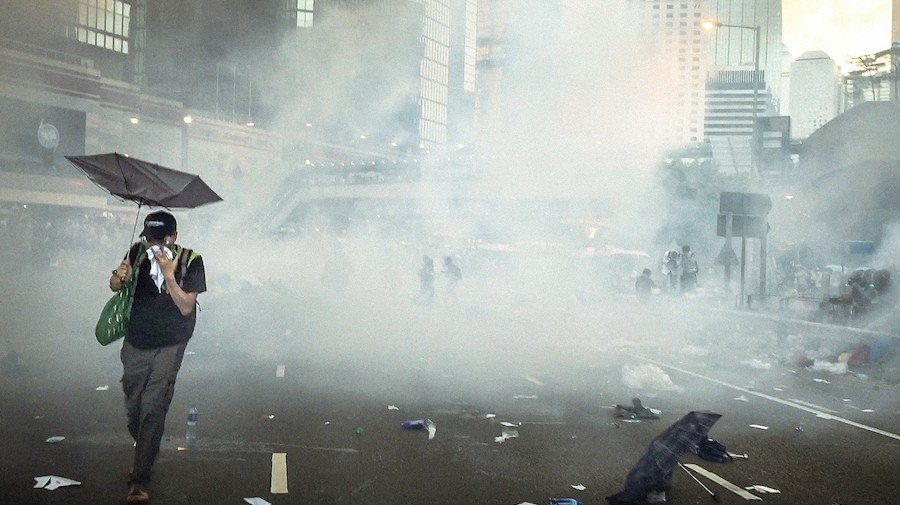 The relentless march of technological progress is the source of almost all the problems facing the modern news media but, with a little inspiration, it can often provide the solutions.

A recent Tech Raking event in Boston brought together experts in social media newsgathering and verification to better understand the field and figure out ways to move the industry forward.

After a morning of talks and presentations on the subject, delegates broke out into teams to brainstorm technological solutions to prevailing issues at the crossroads of social media and journalism with four forward-thinking projects emerging at the end of the day.

The winning project, selected by a panel of expert judges including First Draft Coalition members Claire Wardle and Craig Silverman, would have support from the Center for Investigative Reporting in making their idea a reality.

Being quick to spot news as it breaks is central to any news organisation and social media can be a help and a hindrance here. When protesters and police clash, an all too regular occurrence in recent years, journalists need to find the signal in the noise to identify what is happening where.

“When people tweet about it they’re mad as hell,” said Reportedly’s editor-in-chief Andy Carvin, presenting his team’s idea for using natural-language processing as an alert system. “They’re not talking casually about teargas, they’re very likely swearing or using other exclamations and powerful language to communicate that something is happening now and people need to take notice.” 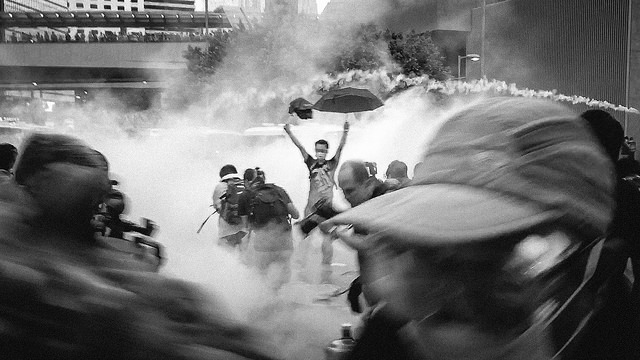 Police attempt to break up the Umbrella Revolution protests in Hong Kong. By Pasu Au Yeung on Flickr. Some rights reserved

Journalists already conduct these kind of searches manually to find sources, but often after already being aware the event is taking place. Automating the process could go a long way in both notifying journalists and finding people close to the action.

“We want to be able to identify the natural language that people use when they’re afraid, when they’re worried, when they’re shocked,” continued Carvin, “and try to figure out how that kind of language can be figured out to trace the ripplings of a breaking news incident happening somewhere.”
The software would feed directly off a social network’s API, monitoring locations and keywords to identify breaking news, with a group of journalists on hand to “fine tune” the results and help the program learn faster.

But understanding and monitoring how witnesses respond to situations and the language they use could also mean newsrooms “develop a bit more empathy” in their reporting of breaking news.

“When a shooting happens news staff just drop down like vultures trying to find [the shooter’s] friends on Facebook and say ‘how well did you know him? Was he a loner? Did he keep to himself?’,” Carvin said. “And that’s the last way you want to be approaching people during situations like this.

“So by being able to observe their responses and having a much more psychographic understanding of what their response was, we’re hoping that it can lead to a more empathetic approach to reporting.”

Finding someone tweeting about an event or sharing information on another public platform doesn’t necessarily provide any clues as to who or where they are. Journalists will often scour other social networks to build a picture of who a person is, to find the person behind the username, but the process can be time-consuming.

“A problem that we encounter a lot is that we find a video,” explained Storyful’s Eliza Mackintosh, “and lets say we think it’s an original but it’s very hard for us to then identify the source of that YouTube account.

“The idea is that through machine learning we would be able to identify usernames that were alike and also crossover. So if I’m on Twitter and I share an Instagram or a YouTube link, all of those platforms that belong to me would be pulled into one place.”

Storyful journalists did exactly this to identify the person behind a video of the Boston Marathon bombing in 2013.

#BostonMarathon http://t.co/lpECKx7OmR my mother’s point of view. we r okay!<3<3

Searching for similar usernames or profile pictures across many networks could bring the data together to show all the different profiles for one user, and Sway could even integrate with geolocation tools like Yomapic for speedier newsgathering said Malachy Browne, Reportedly’s managing editor, also on the team.

“With this and the API it would bring in all of their social information as well,” he said. “So their full digital history, a stream across multiple different platforms of what they’re talking about and give you a much fuller picture of who that person is and be able to appraise their digital footprint.”

There is, of course, the “creepy factor” of such a project, as one judge pointed out. Many people like to keep their different social media profiles separate and although Sway would rely solely on publicly available data it would join dots between them that might not be welcome.

“It’s information that people are making available anyway and people very often are doing that unawares,” Browne said. “You could perhaps have some kind of message, tweeting people to opt in or opt out.”

“Basically what we want to build is a social profile dashboard, a people search for social that creates a register of all of your individual profiles,” he said.

Verification skills and techniques journalists now need online are often picked up on the job by those who need them, and news outlets are still some way from having industry-wide standard for the process.

This is one of the reasons First Draft was established, but one of the teams at Tech Raking had broader ideas to build a learning course for journalism students and working professionals.

“It’s an accredited, online, experiential course that incentivises learning around this important topic,” said Meedan’s Tom Trewinnard. “It provokes accountability and develops expertise in image verification while also providing some kind of certification for students that they can then use once they leave journalism school.”

With the courses and learning structure built around journalists’ specific beat, Trewinnard and his team aimed to include the breadth of tools and techniques necessary across the spectrum of verification, based on real-life news events.

“It covers everything from reverse image searches, to preservation, to source location and at the end it could be something more sophisticated,” he said, “like reviewing exif data or interviewing people and with every little step you learn new tools.”

Testing the legitimacy of images shared on social media — everything from where and when the image was taken to the original photographer and the actual content of an image itself — is obviously a huge problem for journalists.

Most devices will store this information in the metadata of a photograph or video when it is captured, but social networks automatically strip it out when users share online.

“It’s very difficult to insert yourself into the workflow and make sure people are capturing the information journalists need in order to assess an entry after the fact,” said Kevin Connor, president of Fourandsix Technologies, presenting the idea.

“So the thinking was how can you best influence the social networks to do a better job in supporting journalists in verifying media.”

This “better job” would mean giving users the choice of what metadata to include in their images. Once the system is introduced, users would opt in to include certain metadata in their posts and the verified images would receive a blue tick in much the same way as verified users.

The TRIP team admitted there were privacy concerns that “we have to hash out”, potentially with the help of a board established to raise and address the specific concerns, but the problem still remains of persuading social networks to get on board with the idea.

“I think a big incentive is, if you look at Facebook or Twitter or any of these organisations, they are hiring people to curate feeds of news,” said Connor.

“If you have a platform where there’s unreliability of content and you want to work in news that represents a major problem, or at least a major branding issue,” he said.

The judges decided Suddenly had the most potential for real-world implementation and the team will have the opportunity to build a prototype in collaboration with the Center for Investigative Reporting.

Sway were close runners up, but all the projects hold potential for helping the industry better understand and navigate social media.

Here are some of the other ideas and questions posed by delegates at the event: 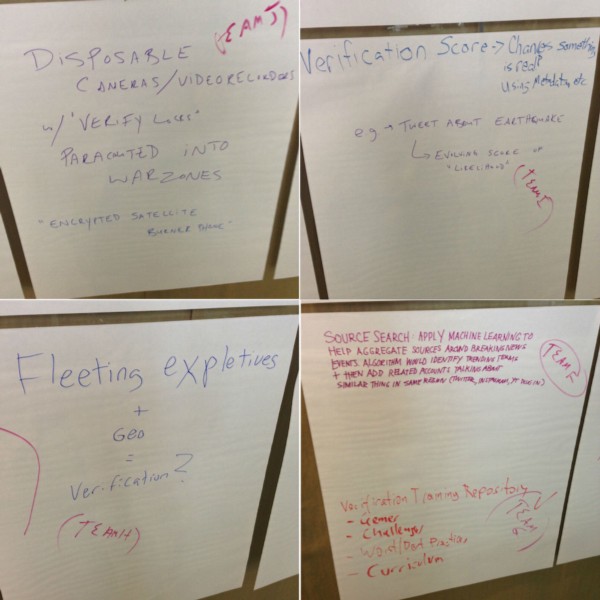 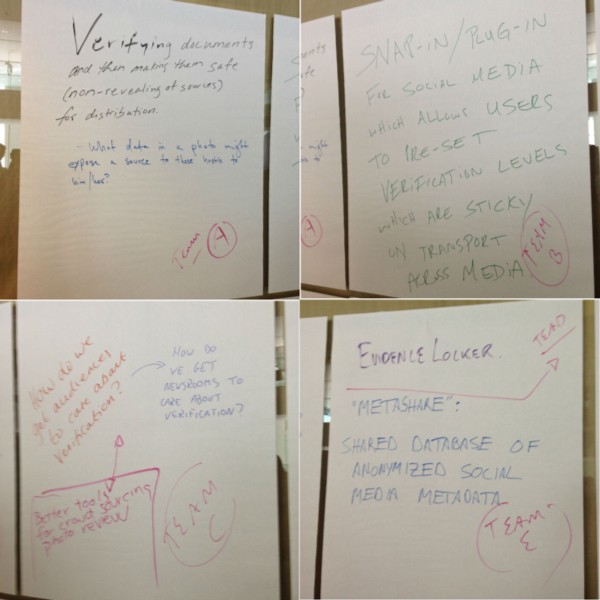