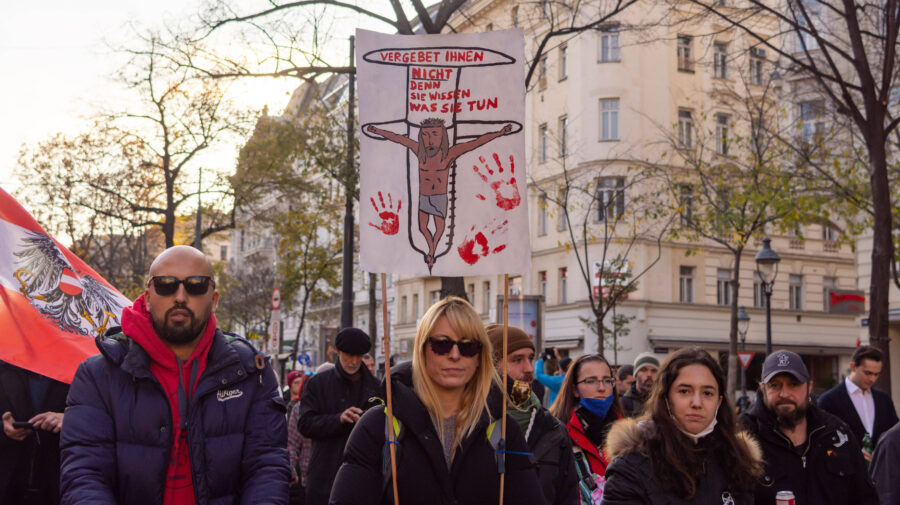 False comparisons have again been drawn between Nazi Germany and Covid-19 pandemic measures, this time prompted by the introduction of a lockdown for people in Austria who are not fully vaccinated.

About two million people in Austria, or one-third of the population, were placed in lockdown on Monday, November 15, with the country facing a surge of infections. Austria has one of the lowest vaccination rates in Western Europe, with anti-vaccine sentiment encouraged by the far-right opposition Freedom Party.

There were many references to Austria as Adolf Hitler’s birthplace and the rise of Hitler’s Nazi Party in Germany, with comments claiming history was repeating itself.

Others commenters falsely claimed unvaccinated people would be sent to “camps”, “rounded up” and vaccinated, or forced to wear signs like yellow stars, as Jewish people were forced to under Nazi rule. Some referred to “the Final Solution” when discussing the lockdown, while others made antisemitic statements and claimed the lockdown was a sign that Austria is embracing fascism.

Comments that misconstrued the role of vaccines and therefore the relevance of the lockdown were common. Some falsely stated that the vaccines don’t work and that unvaccinated people were being blamed for rising case numbers. Research shows that vaccinated people are less likely to contract and spread Covid-19, and less likely to require hospitalization.

There were misleading attempts to link Austria’s lockdown with pandemic measures in Australia, such as claiming that Victoria’s controversial pandemic laws would give the state’s premier power to implement a similar lockdown. The false claim was also made that Australia is building camps for the unvaccinated, as debunked by AAP Fact Check here.

As previously reported by First Draft, opposition movements to Covid-19 vaccination and other public health measures have frequently sought to link aspects of the pandemic with Nazi indoctrination and policies. These types of comparisons are unfounded and irrelevant: Jewish people and others, including Romani and gay people, were persecuted and killed based on ethnicity and sexuality. — Lucinda Beaman