The 5 habits of trustworthy social reporting 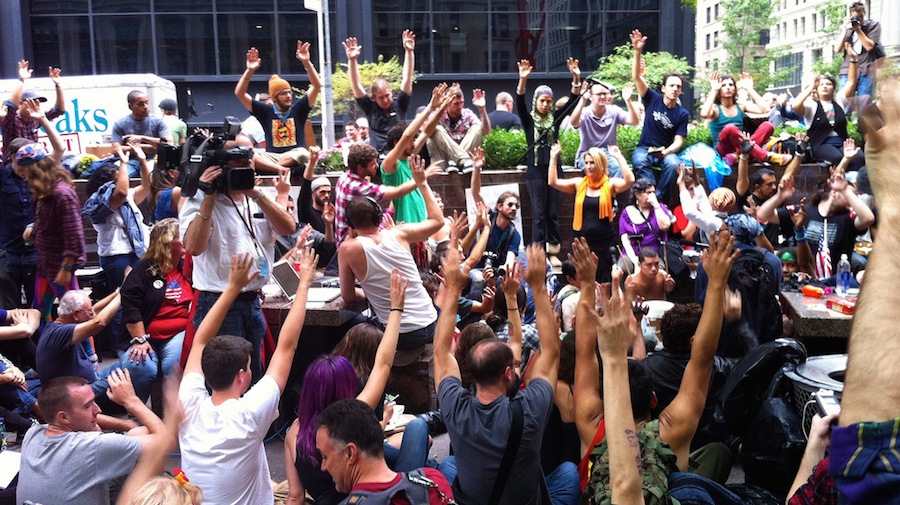 A scene during the Occupy Wall Street protests in September 2011. Daniel LaTorre/Flickr. Some rights reserved.

As real-time reporting becomes the norm on social media, Josh Stearns argues that journalists should lead their communities to gain their trust

It started five years ago this fall, when I saw Brian Stelter tweet about the arrest of a New York Times journalist who was on the Brooklyn Bridge covering Occupy Wall Street protests. Over the next year I would go on to track and document nearly 100 journalists who were arrested covering protests in the United States. All of this was done online, cross-referencing social media reports, developing sources in cities around the country, and publishing in real-time.

In those early days of social reporting, inspired by people like Andy Carvin, I developed new habits, new practices and new guidelines for my own reporting. I made mistakes, I learned a lot. With multiple protests unfolding in multiple cities, often late into the night, my life began to revolve around the rise and fall of hashtags.

There was an urgency to this work. At times my reporting was how newsrooms found out one of their colleagues had been arrested, other times it helped get journalists freed and eventually have their charges dropped.

Looking back on it now, five years later, I realize reporting on breaking news on social media has rewired my brain (I mean this figuratively, though brain science suggests it may also be true literally). As more and more people participate in breaking news events online, how might this rewiring shape the way people report on and experience breaking news?

Today, I don’t work in a newsroom and my job doesn’t call on me to tune into news events unfolding around the globe. And yet when news breaks something in me clicks. Without much thought, I:

In short, I start listening to the signals in a different way. Others who work in breaking news report the same thing.

“Whenever I hear of a news event – be it via a push alert, a random tweet or something on the radio – I will instantly run through a checklist in my mind to determine if this is something that I need to be working on,” Fergus Bell, of Dig Deeper Media, wrote to me. And if it’s a big story it means dropping everything and getting to his computer.

“Once in breaking news mode I just get my head down and end up immersed in it,” he told me. “I pretty much don’t eat or get up from my computer until I feel that I am totally on top of it.”

My wife says she can see this same shift in me. She describes it as similar to when I see someone get hurt or witness an accident. For a time I was trained as a wilderness first responder and when I see someone get hurt I default back to my training. I get ‘in the zone.’ In a recent article here at First Draft I talked about the role of “information first responders”, who arrive online where virtual crowds are gathering to bear witness to breaking news events.

Five years ago, however, there were fewer of us online during breaking news events. Today, as Twitter and Facebook increasingly become the venues where people not only learn about breaking news but also participate in the online response to it, many outside of newsrooms are forming new habits and practices. We are in a shift from the 24-hour news cycle to the participatory news cycle, where we don’t only see a story unfold in real time, but also take part in it.

This raises critical questions for those of us who have been engaged in this work for years, or for whom our jobs put us on the front lines of these digital crowds: How can we marshal the energy of online witnesses in ways that stem – rather than speed – the flow of misinformation? What sorts of habits do we want them to develop? How can we expand digital literacy during breaking news and cultivate careful and critical online crowds?

As a starting place, here are five habits of trustworthy social reporting:

It should be no surprise that these ideas are also central to the Online News Association’s social newsgathering code of ethics. The truth is, journalists reporting in real time on social media are not just covering an event, they are helping establish new norms for how online communities respond to breaking news.