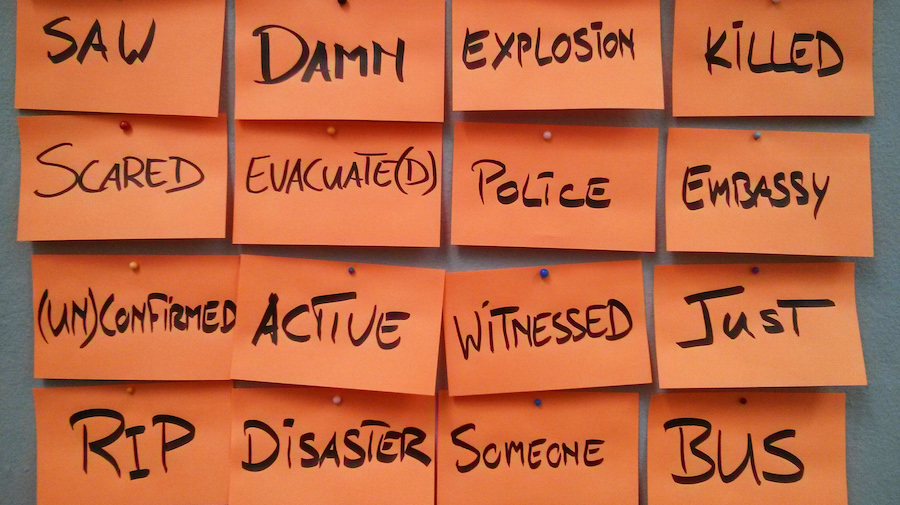 News breaks fast on Twitter, but how do you find it? Deutsche Welle's Julia Bayer and Ruben Bouwmeester have put together some search terms to help

By its very nature, breaking news happens unexpectedly. Simply waiting for something to start trending on Twitter is not an option for journalists – you’ll have to actively seek it out.

The most important rule is to switch perspectives with the eyewitness and ask yourself, “What would I tweet if I were an eyewitness to an accident or disaster?”

To find breaking news on Twitter you have to think like a person who’s experiencing something out of the ordinary. Eyewitnesses tend to share what they see unfiltered and directly on social media, usually by expressing their first impressions and feelings. Eyewitness media can include very raw language that reflects the shock felt as a result of the situation. These posts often include misspellings.

In this article, we’ll outline some search terms you can use in order to find breaking news. The list is not intended as exhaustive, but a starting point on which to build and refine searches on Twitter to find the latest information.

Here are some terms you should always have on your radar:

The thing is, if you were to create a Tweetdeck column with all these words, the amount of noise would be unmanageable. Instead, you can filter out the noise via Tweetdeck or exclusion of terms – or you can just get your query right.

We have therefore structured the search terms in categories.

For human disasters like terrorist attacks, shootings, explosions, war, conflict, train collisions, etc. you can use the following search terms:

Twitter operator example: ”WTF OR shit OR OMG AND explosion OR shooting”.

Here are some examples from the terrorist attack in Paris last November. Note that as soon as you find breaking news, make sure to translate your keywords into the language of the country where the event is taking place.

“6 bodies lying at 90 rue Charonne. People throw sheets from the windows to cover [them]. Total horror.”

For natural disasters like earthquakes, tsunamis, volcanic eruptions, floods, etc. you can use the following search terms:

Twitter operator example: ”earthquake OR disaster OR evacuation AND massive OR safe OR people running”.

Here are some examples from the earthquake in Nepal in April 2015. Note that after a hashtag has taken hold, you can follow updates on the event using it (e.g. #NepalEarthquake) or using Twitter’s location function (near:Kathmandu).

A Massive earthquake just hit Everest. Basecamp has been severely damaged. Our team is caught in camp 1. Please pray for everyone.

For political events like elections, retirement, change of power, coup, protests, demonstrations, crisis, etc. you can use the following search terms.

Twitter operator example: ”coup OR demonstration OR protests AND our OR active OR corruption”.

Most protests or demonstrations will quickly have their own hashtag, however. Here is an example from the May 2013 protests at Taksim Square in Turkey:

Death of a VIP

For events like the unexpected death of VIP’s, singers, actors, politicians etc, the following search terms can be useful:

Twitter operator example: ‘RIP AND unbelievable OR died OR death’.

Here is an example from the death of Whitney Houston on in February 2012:

My sources say Whitney Houston found dead in Beverly hills hotel.. Not in the news yet!!

Breaking news doesn’t always have to be bad news. Remember #IStandWithAhmed, the student who got arrested for bringing his homemade clock to school? It’s hard to find unexpected stories like that. To do so, we recommend using curated Twitter lists so that you won’t miss tweets like this one:

Cool clock, Ahmed. Want to bring it to the White House? We should inspire more kids like you to like science. It’s what makes America great.

The constant conflict in the Middle East is a regular source of important news stories. We talked to our colleagues at the social media desk in the Arabic Department at Deutsche Welle to find out which search terms they use to discover breaking news in the Arabic World. This is what they told us:

Combine these words with the name of a country, and you’ll discover the breaking news there:

Another way is to combine the two main search terms Aajeel and Al An with the words picture or video.

Still, one of the challenges is that the meaning of words in Arabic can differ a lot depending on the region you’re searching in. Also, Twitter is not the main social network people in the Arabic World use to share news. But if they do use Twitter, most of them use these phrases in their tweets when they see something happening.

So now the news has broken and you’re still looking for UGC – just remember you’re not the only one. One way to find relevant content is to use search terms like “use your pic” or “use your video”.

To stay updated on unfolding events, create or subscribe to Twitter lists with trusted sources who are covering the event and filter them with the search term: (un)confirmed. Once a hashtag has been established, monitor it – you wouldn’t want to miss out on a lot of posts containing #ParisShooting, #ParisAttacks, #JeSuisCharlie, #JeSuisTunisie.

We’d like to thank all of those who have contributed toward finding these search terms. Please let us know if we’ve forgotten anything or if you have other news category suggestions that we missed out on. As this is an ongoing research project, we’ll highlight Facebook and Instagram searches as well as other languages in upcoming articles at Reveal Project.

This is an edited version of an article first published at RevealProject.eu, republished with permission.

Julia Bayer and Ruben Bouwmeester are freelancers at Deutsche Welle, Germany’s international news broadcaster. Julia Bayer is social media journalist, trainer and manager and works for the DW Social Media News Desk doing research and UGC verification. Ruben Bouwmeester is an innovation manager, product developer and trainer. He specializes in UGC and verification of eyewitness media and is currently working on the research projects Reveal and InVID.