In social journalism, verification is a community service 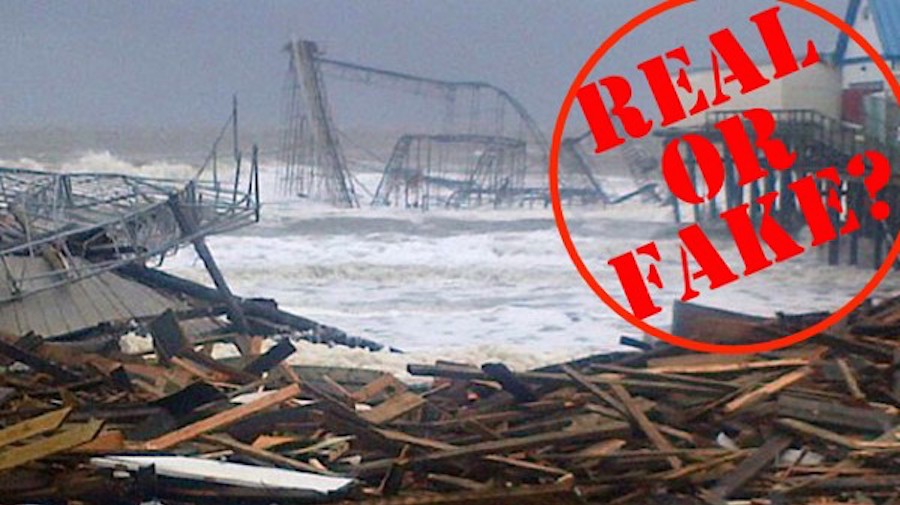 How a one person newsroom based on Facebook built a community of more than 200,000 people to help beat back rumors and misinformation

On October 4 journalist Justin Auciello posted a video of a dramatic coast guard rescue to the Jersey Shore Hurricane News Facebook page. Within 24 hours the video had garnered nearly 350,000 views and more than 5,000 people had shared it with their networks. 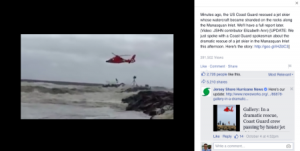 The video in question was not recorded by Auciello but by one of the 228,000 members of his Facebook community who he calls his contributors. Jersey Shore Hurricane News (JSHN) is a unique social journalism experiment that lives entirely on Facebook, Instagram and Twitter (although Auciello is building a new website which will be launching shortly).

For nearly five years Auciello has been reporting hand in hand with his community, pioneering what he calls a “two-way news outlet” that is “for the people and by the people” of the Jersey Shore. He has cultivated an incredible network of eyewitnesses and citizen journalists who feed him a constant flow of news and updates that he verifies, connects and uses as the foundation of his reporting. That reporting, and the way Auciello uses his vast network to help people in need around Jersey, even caught the attention of the White House.

Auciello launched JSHN in part to combat misinformation and viral rumors in the lead up to Hurricane Irene in 2011. Over the years, running a social driven news organization, Auciello (who has no formal journalism training) has honed his verification skills. Today he reports daily on local issues and events up and down the Jersey shore. 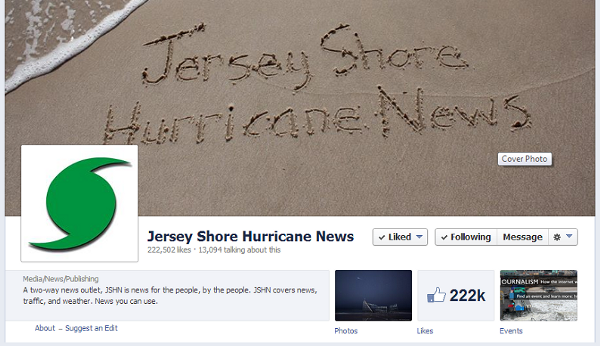 In the interview below (lightly edited for length and clarity), Auciello discusses verification, community service and how he has built a vital news organization around eyewitness media.

Q: I’ve heard you say that you started JSHN in part because you were frustrated by the misinformation you saw circulating on social media in the lead up to big storms. What was your goal in those early days when you began the Facebook page?

I’ve always been a tech early adopter (on the “text” internet/usenet back in 1993 at age 13, blogged early, hopped on social media quickly, etc.) and I’ve always been interested in journalism (editing my high school newspaper and writing periodically for my college newspaper). I also have a graduate degree in urban planning, so I’m interested in how communities form and evolve. So there’s a natural merging of all three.

I’ve been interested in the intersection of community planning and community news for almost a decade, but during the layoffs and newspaper closures of 2008 and 2009 I really started thinking about citizen journalism as a responsibility to community, as part of building strong neighborhoods.

I have an immensely strong connection to my community. So when Hurricane Irene started to become a threat in late August 2011, I saw an opportunity to simply create a Facebook page — that’s where everyone was hanging out — to provide information in a two-way fashion. Back then, we were not accustomed to tropical threats, and I knew local mainstream media had never covered such a threat on social media, so I had a vision that JSHN would work well to serve the community.

I simply wanted to connect people, allowing them to provide local reports (they’re all known as “JSHN contributors”) under the watchful eye of an editor (me).

“I have an immensely strong connection to my community.” — Justin Auciello

Q: Is there one really memorable fake photo, video or report from Hurricane Irene or Sandy that you remember? How did you respond?

Oh there were countless. I debunked many, but also confirmed others that many people didn’t believe were real. Perhaps the most dramatic photo provided by one of our contributors was from the top of the Mantoloking Bridge, looking out over an inlet where numerous homes were washed away. I didn’t believe it at first. It was too surreal. So I used Google Street View from the exact location facing east. It looked real. Then I contacted a friend from the local police department. He confirmed. When I reported it, people said it was fake. They couldn’t believe. But it was real. 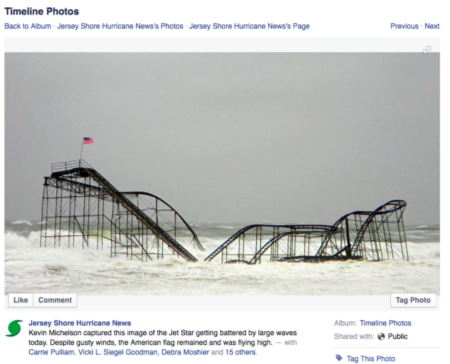 The iconic Jet Star rollercoaster from Casino Pier sitting in the ocean, with boardwalk planks sprawled all over the beach in the foreground, is another memorable one. Since I had people on the ground, I confirmed it with a friend and a local fire chief. After reporting it, again, people couldn’t believe it.

Q: Your reporting is often made up of a mix of reports and photos from people who follow you as well as your own original reporting. How do you fact check things people send in to you at JSHN?

Too many methods to list. I take verification extremely seriously. That goes back to serving my community. I’ll generally contact a source to verify a piece of media (photo, video, text). If I can’t get info that way, especially during an emergency, I’ll search around on social media sites to monitor the chatter, listen to the local scanner, and contact emergency services. I also rely heavily on a network of hundreds of people I’ve befriended since JSHN went online, and that usually works, as well.

Q: How can a small newsroom — in your case one person — help take on rumors that spread so far and so fast online during breaking news and big storms?

Two ways. I instituted a program called “RUMOR CONTROL,” for debunking rumors on Facebook and Twitter. I asked people to send me rumors directly, keeping it off social media (or at least hopefully) based on the theory people share not to be harmful, but because they want some insight. It’s something that traditional media doesn’t do rapidly. People found a lot of value in it.

And how does one person do it? It takes a significant amount of time, especially when you’re juggling real-time information and preparing longer reports that connect the dots on top of that.

Q: In the lead up to the coming storm, Joaquin, I’ve seen people sending you sensationalized reporting from other news outlets, voicing their frustration with how other people report these stories. Have you helped your audience become more skeptical of the news and information they see online? 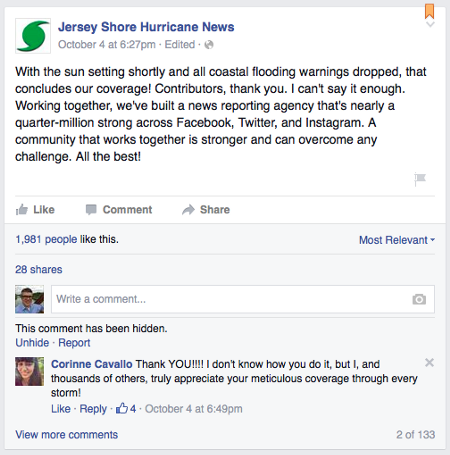 Absolutely. People know that I abhor sensationalized storm reports. It’s the antithesis of public service. I report to serve my community. Plain and simple.

I don’t publicly call out hyped reporting to my audience, but they regularly tell me that they appreciate my straightforward style in a world of dramatic headlines and graphics.

Q: What tools do you use for fact-checking or assessing eyewitness media or user generated content? How is Facebook as a platform for doing this work? Are there things you can do on Facebook that help you with your work in this way?

Of course, the JSHN contributors are always providing information, especially during a major event. Facebook isn’t the best platform for this, since many don’t set their posts to public. Twitter and Instagram are more powerful when it comes to public posting and searching. People know the #JSHN hashtag and will often use it to send tips. On Instagram it has over 18,000 posts in the last year.

A sample of photos from the Jersey Shore Hurricane News Instagram page, taken and submitted by community members 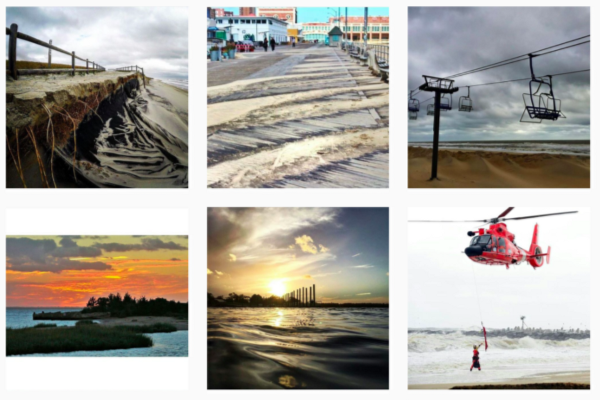 Q: So much of weather is about percentages and possibilities. How do you tell when a report is false or overblown? How do you communicate what you know and what you don’t know to your audience and help train them to make sense of the flood of information coming their way?

While I’m not a meteorologist, as a surfer and someone who grew up on a barrier island I’ve always been fascinated with weather. During both day-to-day threats (say thunderstorms or minor snow events) and major events (blizzards, tropical systems, etc), I digest a ton of information, mainly from the National Weather Service and other sources that I trust. I’ve learned how to synthesize complex information. So when it comes to reporting it to the masses, I can articulate it in simple fashion that outlines uncertainties and confidence levels.

People appreciate it. It helps them understand the issue and make rational decisions. I also don’t publish sensational headlines (for clicks or shares) and then say, “Well if you read the report, you’d see that it was balanced.” Nope! If you’re publishing an erroneous headline just to get people on your site, you’ve failed.

Q: Why do you care so much about this issue?

Community. I care about my neighbors. They deserve accurate, rapid, and rational information. It’s a simple as that.