How an anti-Muslim influence operation spread on Indian social media 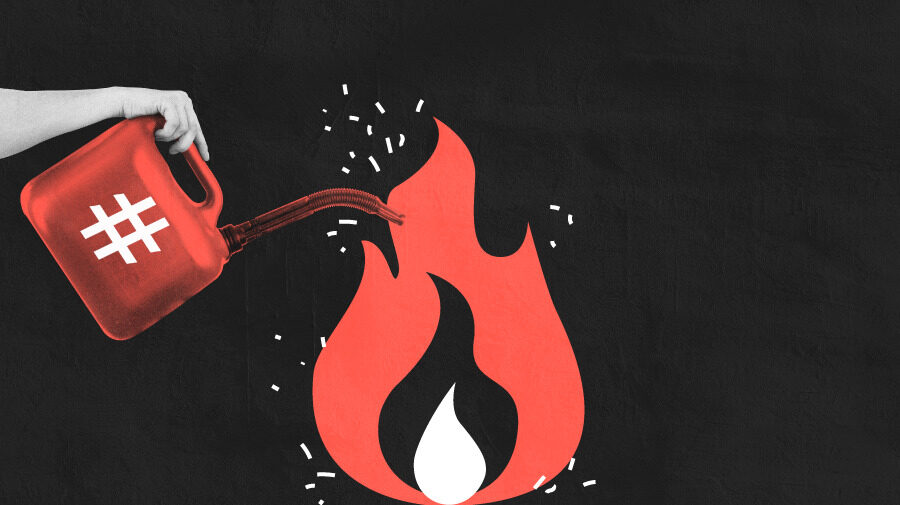 An anti-Muslim influence network in India hijacked recent conversations around Israel and Palestine.

On the evening of May 12, an open call was launched on Indian social media to get the anti-Muslim #UnitedAgainstJehad trending.

The text was accompanied by a graphic with more detailed instructions: “You have to tweet at least 40 times […] Radical Islamic Jehad is much more dangerous than any pandemic.”

@Randm_indianguy is the author of this first tweet — a “hardcore nationalist,” according to his Twitter profile, and a regular promoter of Islamophobic, pro-Hindu narratives.

In a few hours, the likes and shares poured in and by May 13, the hashtag had already appeared over 11,000 times, producing nearly 70,000 interactions on Twitter. 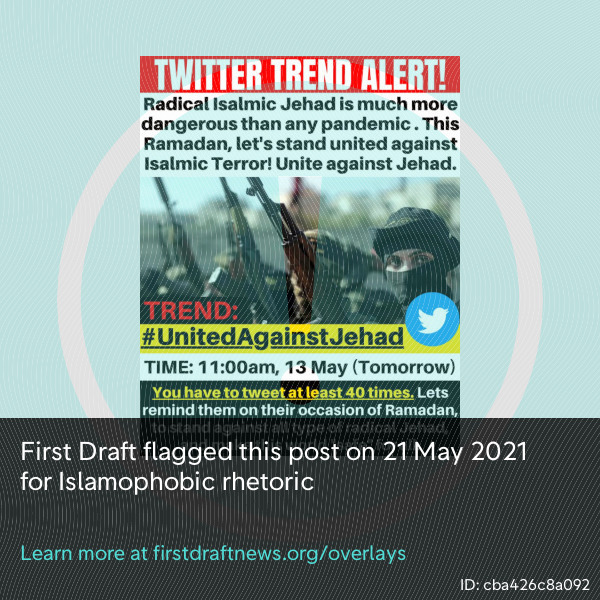 Astroturfing campaigns such as this are routine on Twitter.

But as conflict broke out in Israel and Palestine, thousands of anti-Islam and pro-Israel messages flooded Indian social media, using the conflict as a vehicle to promote Islamophobia.

Using newly created accounts posting the same text and amplifying specific hashtags, the Twitter network attempted to insert itself into the global conversation around the Israeli-Palestinian conflict while artificially pushing anti-Muslim messages in India and beyond.

Among the key narratives pushed using the hashtag was the idea that Muslims pose a threat to the Hindu way of life, and that they threaten India’s national security. These themes have long been promoted by leaders from India’s ruling Bharatiya Janata Party (BJP) and affiliated groups, Human Rights Watch warns.

Among the top 100 most-shared tweets in the dataset, 28 posts included references to the Islamophobic conspiracy theory “love jihad,” sexual violence, alleged incidents of communal violence or a rejection of Muslim customs.

Terms such as “Muslim” and “Islam” were avoided and references to “community” and other terms were used, possibly in an effort to avoid content moderation.  Notably, an alternative spelling of the term “jihad” was used, possibly in an attempt to avoid detection. Similar tactics have been identified in First Draft monitoring, such as changing the spelling of Muslim to “m0slim.”

Fifteen percent of the top 100 most-shared posts used few or no words and included memes, images or caricatures. These images often conveyed inflammatory messages that could not be detected from text alone.

In one instance, a picture referencing a Maratha ruler — a popular figure among Hindu nationalists — cutting off the hand of a Muslim butcher was posted with the text, “Oh Hindu … Always Remember, This is How Hinduism has stayed alive…” an unmistakable call for violence against Muslims.

Exclusive data analysis by First Draft suggests that highly coordinated efforts were used to amplify the #UnitedAgainstJehad hashtag to try and influence discussions on the politically sensitive topic in India.

Contrary to popular belief, astroturfing campaigns don’t always primarily rely on the use of bots. Whether automated or not, accounts involved in the Twitter network that pushed the #Unitedagainstjehad hashtag were used to artificially amplify far-right, Islamophobic content.

Several accounts in the network even included the #Unitedagainstjehad hashtag in their Twitter bios; many included Hindu nationalist references. More than 1,000 included the letter H (#ह). At least 266 accounts used the hashtag #teamhinduunited and over 150 accounts refer to the RSS, a right-wing paramilitary organization with links to the BJP.

Ten percent of the 6,000 Twitter accounts using the hashtag were created this month. The number climbs to almost 20 percent between March and May.

While it is difficult to prove the authenticity of the accounts, the large percentage of recently created accounts is highly indicative of a coordinated use of the network.

Many accounts also published identical text  — known as a “copypasta” campaign — and stock text was used repeatedly, possibly in an effort to inflate traffic and manipulate algorithms to promote that particular content.

Examples of copypasta in the dataset included repetition of the hashtag as well as hundreds of unique accounts posting identical messages, such as, “From Bangalore to Sweden, they leave no chances to spread violence. How can people live with these unsocial elements?”

Such coordinated campaigns are particularly efficient in boosting the prominence of a hashtag or message; the more likes and shares a hashtag gets, the more likely it is to be favored by Twitter’s algorithm and further increase its spread.

Such tactics are becoming increasingly common in India, especially in right-wing circles. This February, Newslaundry analyzed a social media campaign led by a BJP leader who was accused of inciting an attack on Muslims in Delhi. This revealed a highly organized campaign on Telegram and pre-written tweets that could easily be posted by individual users in one click. 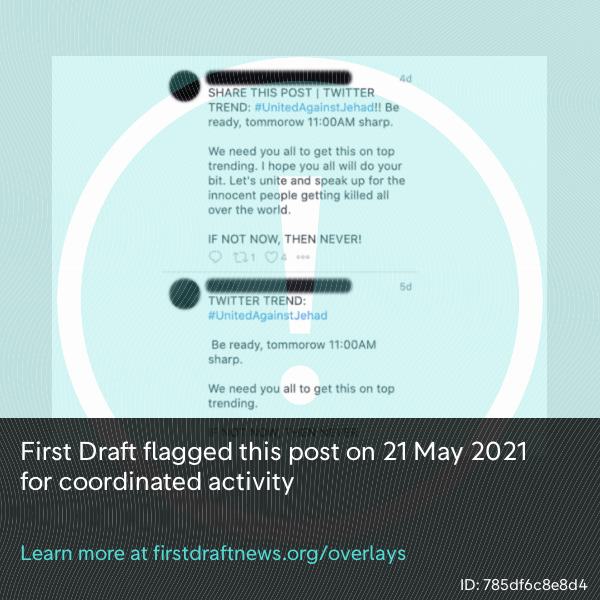 Two of the copypasta posts identified

The “love jihad” conspiracy theory referenced in more than 2,000 tweets in the network has previously been promoted by Hindu nationalists. The theory alleges Muslim men lure Hindu women into marriage to convert them. Despite intense scrutiny, including laws outlawing the practice and dedicated investigative units, very few cases have been confirmed.

Claims about the conspiracy theory have fueled violence, such as unrest in 2013 that killed 62 people and forced the displacement of over 50,000 Muslims in the northern Indian town of Muzaffarnagar.

Dozens of tweets containing the #UnitedAgainstJehad hashtag referenced the Ram Temple, or “Ram Mandir,” a Hindu temple in Ayodhya being built on the site of a 16th-century mosque called the Babri Masjid. The mosque was demolished in 1992 by a mob that included several BJP members; its destruction is widely celebrated in Hindu nationalist circles. The demolition was followed by anti-Muslim riots across the country that killed at least 2,000 people.

The demolition of the Babri Masjid is often referred to as a seminal moment in the relationship between Muslims and Hindus in India, and has led to the resurgence of Hindu nationalism.

Earlier this year, a US government panel on religious freedom recommended that India be designated a “country of particular concern” for “systematic, ongoing, and egregious religious freedom violations.” One member of the panel dissented.

India has a long history of Islamophobia; India’s Muslim population faces discrimination in employment, housing and education and has fallen victim to large-scale outbursts of violence and random attacks.

In a recent interview with the website Rest of World, Mohammed Zubair, co-founder of a leading Indian fact-checking organization, said the country’s media ecosystem is unique in that “much of the misinformation is focused on religious minorities.”

The rise of information disorder in India today, particularly with its focus on religious minorities, has been linked with the ascent of Prime Minister Narendra Modi, his nationalist and anti-Muslim politics and his campaign’s early adoption of social media.

The #UnitedAgainstJehad hashtag’s spread offers a glimpse at the potential scale and the aims of the organized information disorder campaigns that are becoming increasingly visible in India.

India has been at the forefront of the online information battlefield since the beginning of the most recent conflict in Israel and Palestine, with Indian hashtags and accounts among the most active in supporting both sides on Twitter and Facebook.

With the scale of overall conversations about Israel and Palestine in mind, the #UnitedAgainstJehad network should be understood in its wider context: an active effort to spread harmful mis- and disinformation about the Muslim Indian community.