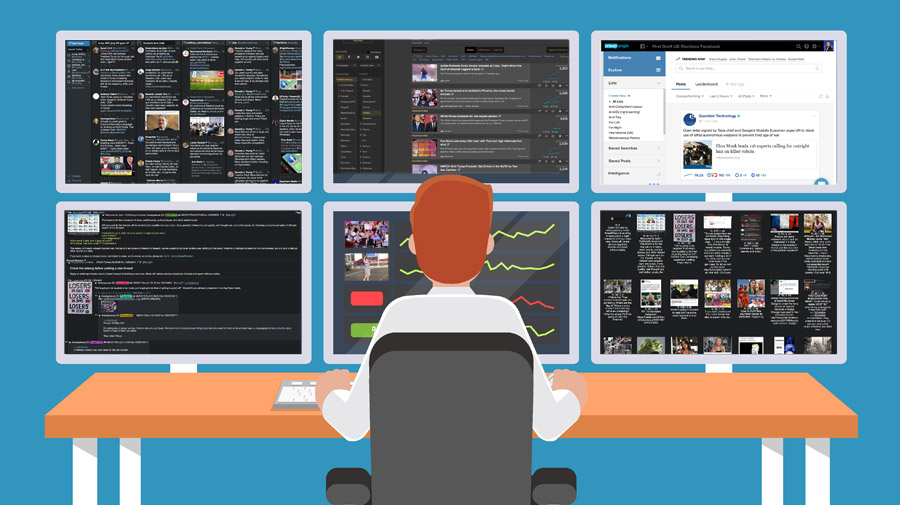 While misinformation is an unambiguous menace of our public discourse, the research on how best to correct it remains far from settled. But at least one thing is undeniably true about fact-checking and verification: timing makes a difference.

How though does one sift misinformation from the infinite social web in time to actually make a difference? While there is still no technological silver bullet, well-organized groups of journalists can utilize existing technology disrupt misinformation. Monitoring techniques like the ones I’ll present here supported our work during this year’s snap election in the United Kingdom and in social newsgathering enterprises like Electionland.

In a previous post, I talked about how to put together search queries and account lists to watch for misinformation on social networks. There, I mentioned that these queries and lists could be fed into existing tools to create feeds of relevant content that can be easily monitored.

The tools we use to monitor some social networks will change depending on which network we’re dealing with, so I’ve split this piece into sections based on network groupings.

For the purposes of this piece, I assume that you are monitoring these networks alone. In reality, that’s impractical, and you’re going to need at least a couple of colleagues. Begin delegating by assigning each team member to monitor one or two networks. If you have more people, divvy up search queries and lists depending on how quickly their feeds move. 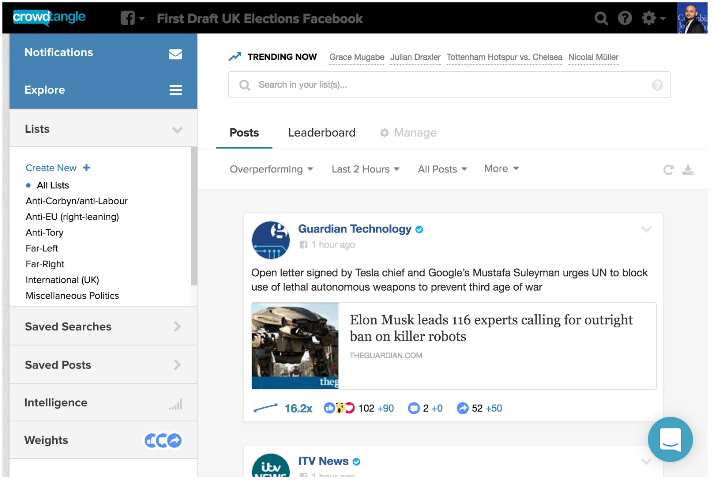 Searches are limited to AND, OR and NOT operators — and only one AND operator at that, which is one reason I avoid using CrowdTangle for Twitter monitoring. You’re also going to have to translate your queries into form fields. But lists of pages, groups and accounts that you’ve created can be bulk uploaded into CrowdTangle from a CSV.

CrowdTangle’s feeds can be tweaked to cover any time frame, and posts in the feed can be ordered according to different characteristics. You can prioritize posts that are recent, seeing rapid engagement, over-performing posts relative to other posts or simply have the most interactions outright. And, if a particular source is showing up too much in the feed, you can modify its “weight” such that it appears less often.

Live Displays let you to present feeds from different social networks side-by-side, and alerts via email or Slack mean you can leave your feeds without missing too much. Viral alerts, for example, flag over-performing posts as they arrive, and referral alerts will ping you every time a post matching a query is posted.

Vis-à-vis Reddit, CrowdTangle doesn’t provide visibility into thread comments; it only tells you which threads to pay attention to. So, if you want to follow an individual thread, use the reddit-stream tool, which turns threads into auto-updating streams of comments. View a thread’s reddit-stream by simply replacing ‘reddit’ with ‘reddit-stream’ in the thread’s URL.

Unfortunately, there is no existing CrowdTangle-like tool that lets one passively monitor 4chan. However, a little knowledge about some of its native features can help you navigate the site more effectively.

Again, I have to warn you that a lot of what you’re going to see on 4chan is disturbing.

The index (left) and the catalog (right) of 4chan

4chan boards can be browsed two ways: though the index or catalog. The index compiles thread OPs — original posts, or posts that initiate threads — and their five most popular comments into an utterly unreadable message board. Granted, the index offers a bit more pre-click information than the catalog, but it’s chaotic appearance makes it difficult to process when you’re scrolling through it quickly. Instead, use the catalog, which arranges OP images in a grid and allows you to scan all active threads quickly. Sort threads by ‘Last reply’ to surface those are currently active and turn on ‘Show OP Comment’ to have a clearer sense of what each thread is about. 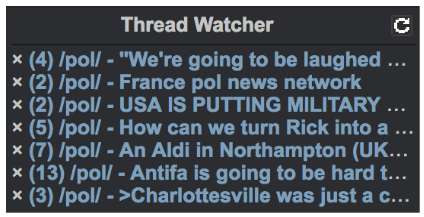 Regardless of how you choose to browse 4chan, make sure to enable the Thread Watcher. This feature allows you keep a small table of active threads at the top-left of the catalog and index, showing how many new comments have been posted to each since you last viewed it. To add a thread to the Thread Watcher, click the dropdown menu of a thread’s OP and select ‘Add to watch list’. Alternatively, if you’re already on a thread’s page, click the clover icon that can be seen at the top-left. Or, if you’re in the catalog, you can find the same icon at the top-left of the thread’s image.

There are a few features you’ll want to turn on to make your life easier:

(Note: Clicking ‘Settings’ will yield different menus depending on whether you’re looking at the catalog, the index or a thread.)

For those willing to take extra steps to help themselves in the long run, you can also take advantage of one of 4chan’s many user-generated browser extensions that augment the 4chan site. For example, Appchan X provides desktop notification functionality and can help organize your 4chan experience through endless visual customization. To use these “user scripts”, you’re going to have to download a script manager like Tampermonkey. Once you have, you can add scripts from Github and or from repositories like Greasy Fork.

By far, the easiest way to monitor multiple Twitter streams in real-time is TweetDeck. 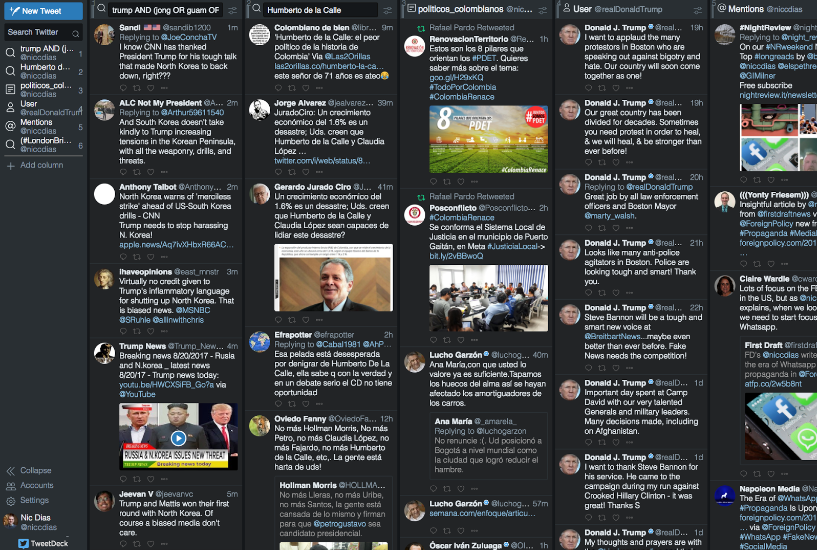 With Tweetdeck, you can arrange an unlimited number real-time streams of tweets side-by-side in columns that can be easily be cycled through.Like in CrowdTangle, each of these feeds is made of posts either matching a search query or posted by one of a list of accounts. However, in TweetDeck’s case, queries can be as elaborate as Twitter allows. Feeds can also be filtered by practically any other feature, like engagement, media type (e.g., images or video) and language. Notifications can be set such that new arrivals to a feed will be announced by a sound or desktop pop-up. (More on setting up TweetDeck here.)

The one downside of TweetDeck is that there is no way to order feeds according to performance. Rather, users are limited to viewing tweets in reverse-chronological order. But you can filter streams by engagement to slow them down.

We’re a long way away from technology that can match the eye and intuition of a journalist. But what technology can do now is help journalists comb through the vast amount of information that flies past our screens every day.

The methods you’ve learned here are perhaps not the flashy, fully automatic solution to online misinformation that a Silicon Valley programmer might hope for, but in the hands of a coordinated group of journalists, it’s a remarkably effective system of tracking emerging misinformation. And when combined with skilled social media verification, it’s a powerful instrument for the truth.