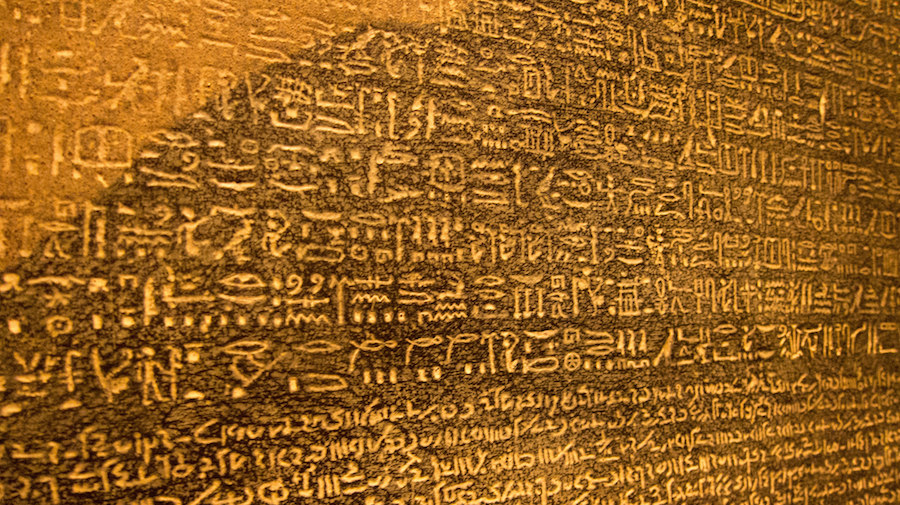 When news is breaking halfway around the world and eyewitnesses are posting video, photos, and status updates to social networks, often the first step in verification is translation

When news is breaking halfway around the world and eyewitnesses are posting video, photos, and status updates to social networks, often the first step in verification is translation. If we can’t figure out where a video is supposedly from, understand what people in a video are saying, read the place name on a street sign, or communicate directly with a source, then our ability to verify that media is decidedly limited.

At Meedan, we love all things translation, especially around global news media, and it was actually our experience translating eyewitness media that first piqued our interest in verification and kick-started our work on Checkdesk. With this post, we wanted to offer a few helpful pointers on how to tackle translation in the real-time world of eyewitness media.

1. Google Translate is your friend, but proceed with caution

There’s no escaping the fact that for a very quick, rough, and free translation for most languages you’re likely to encounter with eyewitness media, Google Translate (GT) is going to be your first port of call. As you can see from clicking the link in Arabic above (go-on, it’ll all make sense), GT is frequently able to communicate the intent of a sentence even if the output is imperfect.

Felim McMahon, formerly of Storyful, uses Google Translate to correctly identify “aircraft bombing” referenced in this tweet that can now be used to corroborate reports elsewhere

Google Translate is brilliantly easy to use and many a how-to guide has been written. As with any tool, though, it’s important to understand its limitations, and this is especially the case with machine translation: an overlooked negation, subject/object errors, and confused tenses are all possibilities (for non-Latinate languages in particular) that can greatly hinder understanding.

The key point to bear in mind with translations provided by GT is that over reliance can cause great embarrassment. There are huge swaths of the internet devoted to documenting the frequently hilarious outcomes of bad machine translation (Google Translate may be guilty for some, but not all of these) and when the stakes are high – especially when covering real-time news – we strongly advise caution.

In this regard, it’s crucial to note that GT and the Twitter-integrated Bing Translate are not optimized for social media content: people Tweet as they speak, and machine translation engines are trained on written rather than oral corpora. For languages such as Arabic, there are are often huge differences between the written and spoken languages, which can often render machine translation meaningless. 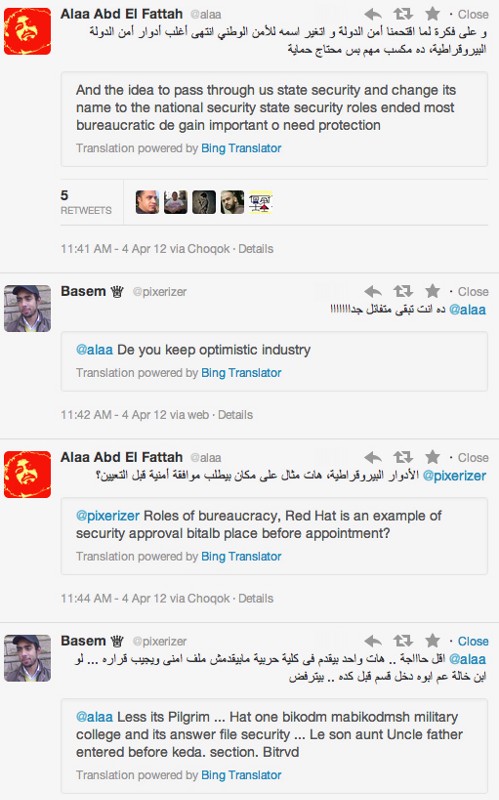 Another common GT challenge is proper nouns: place names and people’s names can sometimes have literal meanings that aren’t listed by GT. Take for example, the Arabic name for the Syrian city of Aleppo (حلب), the site of many eyewitness videos that have emerged since the start of the Syrian conflict in 2011.

Watch out for proper nouns

If you suspect a word (particularly in non-Latin scripts) is a proper noun, it’s always worth running it through that other helpful, search engine-y part of Google for additional context.

Crowdsourcing translation of eyewitness media can be tremendously successful: it can be very fast, more accurate than Google Translate, and you’re likely to glean valuable context from whichever kind soul has responded to your call.

Issuing calls for translation assistance via Twitter, Facebook and Google+ has become commonplace, and in many cases people – including both professional translators and skilled bilinguals – are happy to contribute. There is, of course, a degree of trust involved, but it’s often easy to get a sense for whether a translator has real skills in both relevant languages, or if they have merely copied and pasted from GT.

Storyful have benefitted from crowdsourced translation

There are, however, challenges with the crowdsourcing approach. As you’re often relying on the goodwill of others, there’s no guarantee that anyone will a) see your call for help translating or b) respond, and if they do respond it may be too late.

A major factor in your ability to crowdsource translation will be the size of your network: groups like Storyful and Bellingcat have much better chances of success here as they have big networks in different language communities that they have cultivated over several years. If you’re struggling to gain traction, try to look for people and groups who can act as bridge figures into different language communities. At Meedan, for example, we often share calls for translation help between English and Arabic.

If you do manage to crowdsource your translation, be sure to shower your translator with thanks, and credit their work wherever possible. Even translating a tweet can be more work than you’d expect, and translators (much like journalists) are often overworked and underpaid.

After you’ve checked Google Translate and queried your network, you’re ready to share your translation. But, in our experience, translation is an ever-evolving task, and sometimes new perspectives from other people can bring value to the translation, either by correcting a word or phrasing or adding a cultural nuance that can help the foreign reader understand the context. 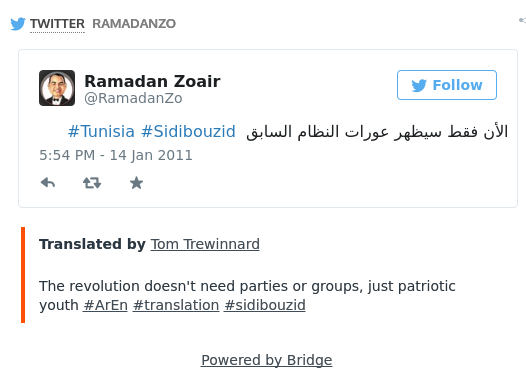 Showing your work — in this case, showing the source text, the translated text and the translator attribution — can build trust in a translation

However, the “show your work” ethos is as important for translation as it is for verification and has been a key part of how Meedan has designed its translation and verification interfaces. It helps foster reader engagement while ensuring you have the best translation available for your work. Transparency can help build confidence in the monolingual reader.

As noted above, Checkdesk really came into being as a response to a verification challenge for our work translating social media content from the Arab uprisings starting in 2010: We wanted to be sure the content we were translating and sharing wasn’t fake, rumor or misinformation.

We’ve thought a lot about this space and the issues outlined above, and we’re working on great new tools for social media translation specifically designed to solve these. If you want to know more, please check out Bridge and get in touch at [email protected] or @meedan – we’d love to hear about how you handle real-time translation and how you’ve overcome any challenges.