Ukraine and MH17: 5 lessons from a 19-month geolocation puzzle 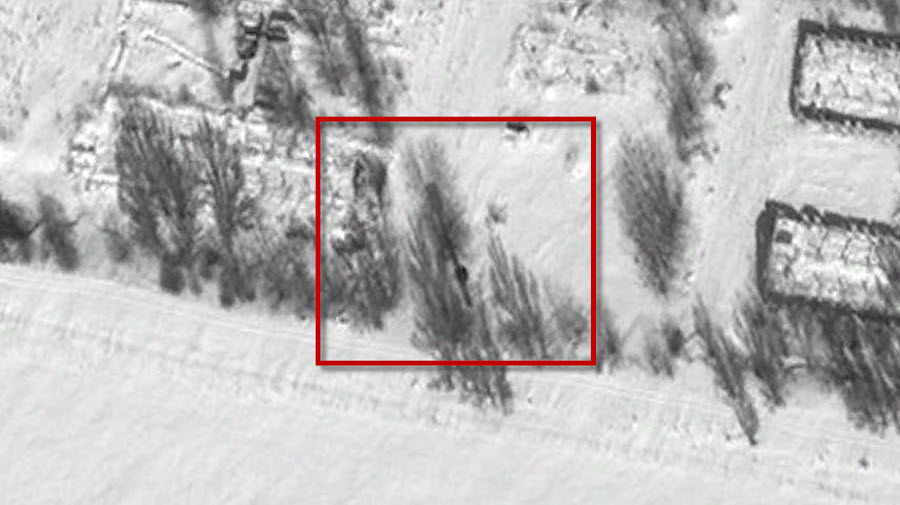 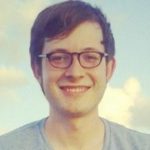 Many – especially in the Russian media – believed this video footage was damning to the Ukrainians, showing what could be the anti-aircraft equipment that downed the passenger plane.

The Buk missile launcher and Ukrainian military base can be seen from approximately 4:35 minutes into the video. Vіyskove telebachennya Ukraini/YouTube

After 19 months, Bellingcat was finally able to geolocate this video footage to a Ukrainian base camp south of the city of Izyum, over a 150 kilometers from the MH17 crash site.

So why did it take so long, and what are some lessons to take from the effort that took nearly two years?

When faced with a geolocation challenge, it is tempting to focus solely on the details seen in the photograph or video – landscape features, visible structures, and so on. However, sometimes exclusively focusing on these details can lead to tunnel vision, giving rise to false leads and dead ends.

The Ukrainian Ministry of Defense told Dutch reporter Rudy Bouma that the footage was taken near an airfield in Kramatorsk, Ukraine but, despite endless searching from Bellingcat and others, there were no matches within 10 kilometers of the site. So we and other digital sleuths honed in on a particular structure in the footage: a tower in the background, thought to be a television tower. 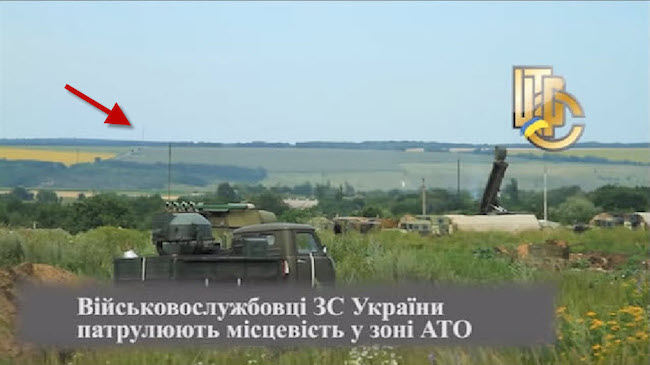 A barely visible tower in the distance could help to verify the location of the base. Screenshot from Viyskove telebachennya Ukraini/YouTube.

Bellingcat, among others, thought this video could be geolocated by cross referencing a list of television towers in Ukraine. There are over 150 of these towers, including almost two dozen near the warzone, but none of the locations looked remotely close to that of the video.

As it turned out, this structure was not a television tower at all, but instead what appears to be a radio tower. While many of the other landscape features are easier to distinguish than a radio tower – the tree lines, shape of the forests, elevation – tunnel vision regarding a single detail can lead you astray. As we will see later, there were more revealing contextual clues to follow up beyond the details on the landscape.

The scene of a verdant field will not look the same in summer 2014 as in photographs taken in autumn or winter a year or two earlier. So it is important to think about the problem not just from different location angles, but from different times as well. However, there are things that remain essentially the same despite the season, year, or perspective.

When searching for outdoor landscapes in satellite imagery, you often are not lucky enough to have a view of the location in the same timeframe as the source photograph or video. The landscape seen in the July 16, 2014 video is hard to recognize from the patchwork of Google Maps imagery, which pulls from multiple snapshots of the scene: 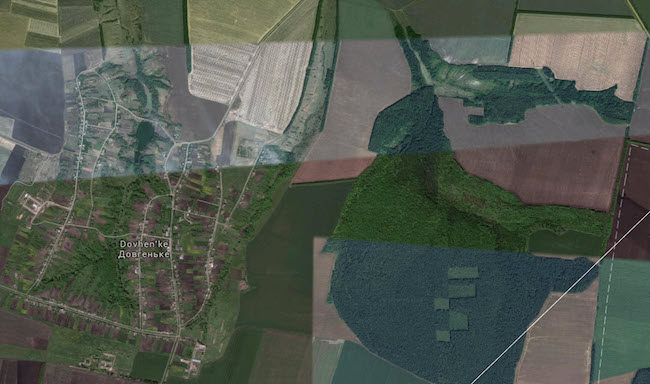 Using Google Earth, you can view the same strips of imagery for certain dates (View > Historical Imagery), unlike the quilt-like structure seen in Google Maps.

However, despite the differences in colors and fields, there are features that did not change which will likely carry over to ground-level photographs and videos. When geolocating (non-desert) outdoor scenes, these are features that you should look out for:

Use shadows, wherever you can find them

An often neglected element in verifying photographs and videos is the presence of visible shadows, both in revealing additional landmarks and in determining when or where the scene was captured. If possible, use visible shadows to orient yourself in the landscape. Obviously, finding a rising or setting sun will give a clear indication of the cardinal directions, but more often we rely on shadows cast by trees and structures. 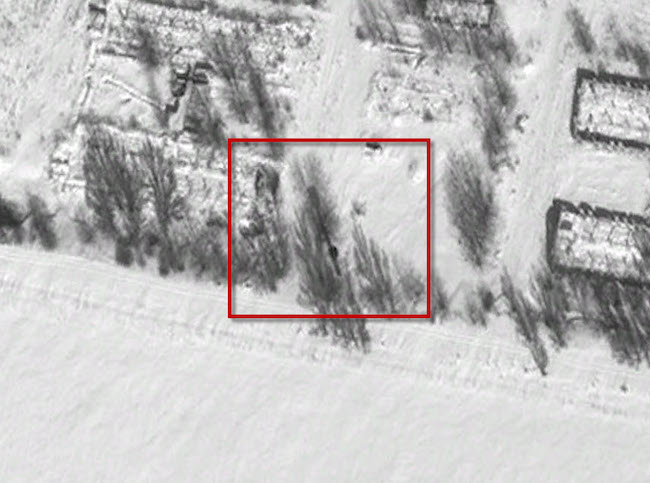 If all else fails, search backwards

After searching past archives from the same television channels, we found that video footage from July 5 had numerous similarities with the July 16 footage, including the same water tower and similar tree lines. 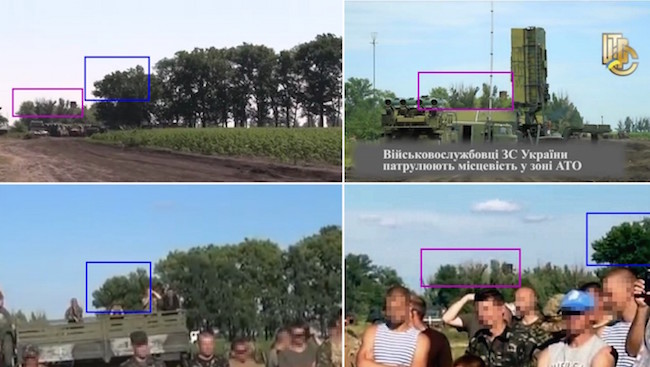 The remainder of the footage from July 5 shows a fairly large base camp and an award ceremony for soldiers who took part in a fight outside Slovyansk, Ukraine. This additional information indicated that this camp was fairly large, and the best route to geolocating the July 16 video is by comparing the features of each base of Ukraine’s so-called Anti-Terrorist Operation (ATO). Unfortunately, that information is not the easiest to find.

To drill down to the right Ukrainian military camp required a lot more than satellite images, as many of the camps were either not visible or under early construction in Google Earth and Yandex imagery. Bellingcat asked 112 Ukraine producer Gaygysyz Geldiyev to follow up with sources at the Ukrainian Military of Defense to find the location that the awards were given in the July 5, 2014 video – the same location as the elusive July 16 footage with the Ukrainian Buks – but the answer would not come for a while. In the meantime, we needed to leverage every source possible to find a positive identification.

A June 2014 article in the Ukrainian Komsomolskaya Pravda publication described a visit from President Petro Poroshenko to a military base south of Izyum, with a map showing the site of the base. 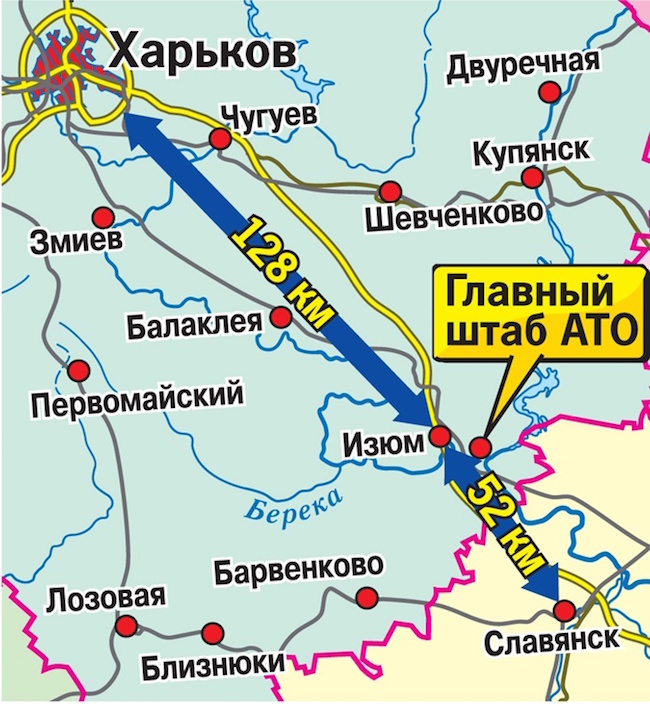 There were many sources indicating that a major military camp was near Izyum, but the precise location was unclear. This map seemed to give us the location with the yellow bubble, but we were not so lucky—the location on the map yielded no results.

Keyword searches in Russian and Ukrainian revealed promising materials, including a video on a Russian social network of a soldier driving through a large military camp and a handful of June 2014 concert performances for Ukrainian soldiers. In one of the videos, a definitive match could finally be made. 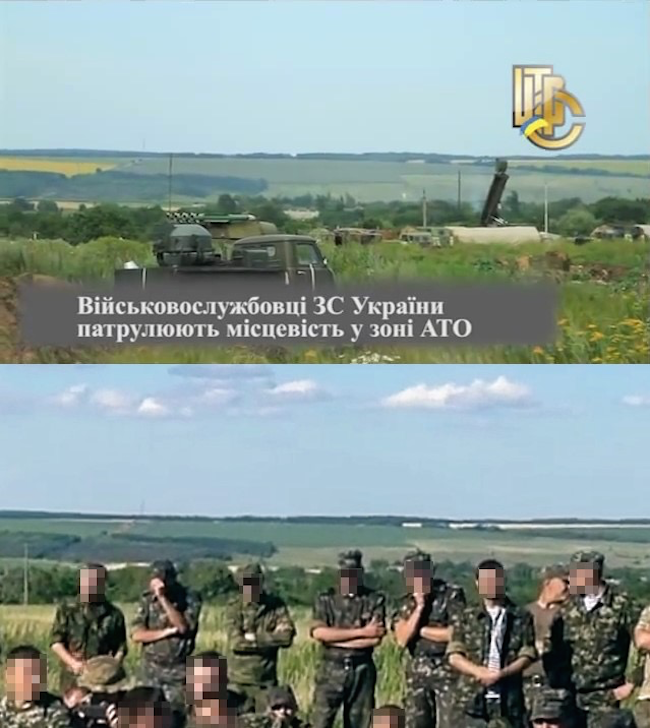 The radio tower can be seen in the background of both videos here. Top: The original video in question Vіyskove telebachennya Ukraini/YouTube. Bottom: Footage of a an event from June 2014 at the same base Auto Maidan/YouTube

Geldiyev came back with information from a Ukrainian source: the camp was near the village of Dovhenke, south of Izyum. Armed with this wide array of information from open and human sources, we were able to make a definitive geolocation: the July 16, 2014 video was filmed just south of the village of Dovhenke, at 49.010856, 37.310150, facing northeast.

While we did not search every day for 19 months to make complete this geolocation, we and others did search off and on for this amount of time, often focusing on the wrong areas (Kramatorsk) or wrong clues (the ‘television’ tower). When a conventional geolocation method does not work, or seemingly promising clues lead you astray, try some of these five methods to rethink your approach.