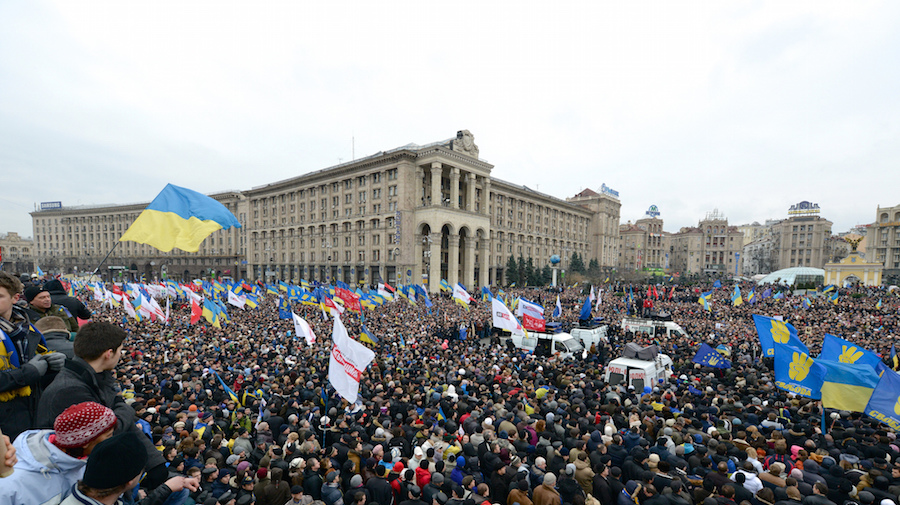 The team from the Kyiv Mohyla School of Journalism have been verifying stories about Ukraine since March 2014, and are now looking to reach a broader audience

Truth is the first casualty of war, or so the saying goes, and although the war in the Donbass region of Ukraine is not on the same scale as others around the world that doesn’t mean the media is getting an easy ride.

From the start of the conflict in March 2014, journalists at StopFake have been conducting an online fight against misinformation, and last week the organisation announced a partnership with English-language broadcaster Ukraine Today to take the battle to the airwaves.

“First of all it’s broadcasting and distribution of their program,” said Tetyana Pushnova, executive producer at Ukraine Today, “and they also help us as journalists to check our facts.

“When I want to put something in my news, especially if this specific news is from Russia, for example, first I try to check it with different sources, but also check it on the StopFake website because it’s very important to understand that this information is not fake.”

StopFake, a product of the Kyiv Mohyla school of journalism, debunks stories, mistakes or misinformation related to Ukraine on a daily basis through its website. Every week the team produce a video digest of debunks, which Ukraine Today, part of the 1+1 Media Group, will now broadcast on its satellite TV channels and international distributors.

Stories range from the ridiculous to the dangerous.

Last week, StopFake called out the Russian Embassy in the UK for using an old photograph (“for illustrative purposes”) in welcoming British veterans to the Crimean city of Sevastopol.

@PeterRiebeek1 this photo is for illustrative purposes, like most photos on Twitter(and on our feed). Read the news article linked. — Russian Embassy, UK (@RussianEmbassy) October 11, 2015

Another story disappointed nu-metal fans across the Donbass by confirming that, no, Limp Bizkit would not be performing in Donetsk and Luhansk, as a number of online sources had reported.
But elsewhere the debunks take a darker turn. In late September a number of Russian websites began reporting that Obama had “accused Ukrainian authorities of genocide”, a claim that was easily proved as false.

A Russian state-sponsored television channel allegedly produced a report to claim Ukrainians were teaching children from an “insurgent textbook”, even over-dubbing the children’s voices, when in fact it was a children’s novel about World War Two.

In the UK, a column about Crimea by a veteran war correspondent was apparently “full of errors” relating to Crimea’s history and tourist access to the peninsula, some of which have now been corrected.

“About 20 per cent [of debunks] are from Ukrainian media,” said StopFake’s editor-in-chief Tatyana Matychuk, “and some from Western media also. We debunk all the fakes we can debunk about Ukraine. We are just journalists who want to do our job and factcheck everything because that is our goal, to show our colleagues in Ukraine, too, that they should verify everything.”

The spreading of misinformation is not necessarily malicious though, and Ukrainian news outlets — all news outlets — suffer from the pace of digital technology, where “modern society needs information immediately,” Pushnova told First Draft.

“You have to choose between the truth and your ability to be first and be more interesting. This situation is everywhere and this is a choice of the modern world.”

In his research, titled ‘Lies, Damn Lies and Viral Content’, Craig Silverman went a long way in identifying the split between news organisations in Western media: those chasing the clicks and skimping on verification, and those maintaining a reputation for truth and not touching spurious viral news.

But he also identified a potential middle ground for news organisations with large audiences to debunk false stories, an area Ukraine Today hopes to occupy as verification, debunks and corrections are the “meaning of journalism”, said Pushnova.

“StopFake is a great source for all journalism in Ukraine and abroad,” she said, “they help us with factchecking and they can show in some situations you have to stop and check information. This is more important than putting information first in your website or in your news.”

Showing the methods, tools or statistics behind the debunks is “crucially important” she said, but insisted there are two kinds of media literacy that need to be understood in the age of social media: for journalists and for the public.

“For journalists, to teach them how to use these tools, and media literacy for viewers and readers so they can verify the information by themselves.”

Debunking fakes “for all the media” is impossible, she admitted, but that doesn’t mean journalists can’t be a voice of reason and truth within their own specific beat. And often that comes down to the basics, but updated for the digital age.

“First they should remember that we have to verify all the information that they receive, even if it comes from the authorities or from other journalists, because before we launched StopFake we believed all the journalists verified information but then we understood that it’s not true. So first a journalist should verify everything.

“Then he or she should always find the original story. You should find the first person to post this story. If you reach this person you will be able to get the first photo or video or ask for some details and if you find them you may be able to understand that this person was not a real person, he or she could be a troll. They might not have existed.

“The third is journalists should find a professional website that writes about professional fact checking tools. It is very important to have one or several websites which can collect all the tools in one place.”

StopFake has its own guides and tools, as does Josh Stearn’s Verification Junkie, and, of course, here on the First Draft website.