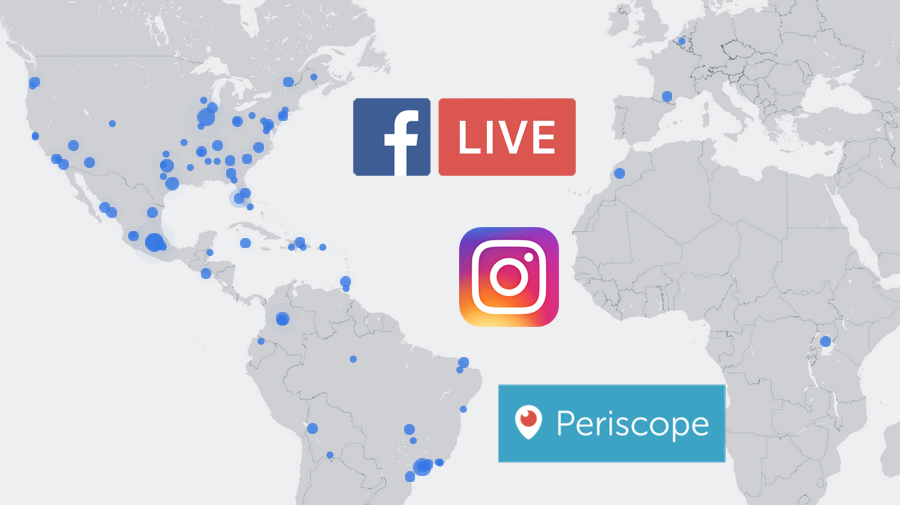 Some of the social media live platforms in front of the Facebook Live map.

For her final project for NYU Journalism’s Studio 20 program, Kim Bode collaborated with Facebook’s Journalism Partnerships Team to research the opportunities and challenges of live video as a tool for journalists. Here, she summarises her findings.

Facebook Live has undoubtedly had a significant impact on the news industry, but it often gets discussed as a tool for newsrooms to create and distribute their own live videos. I wanted to explore how newsrooms were thinking about what I call “user-powered live video.”  I therefore interviewed 20 journalists working in the US, UK and Germany, following a survey that was completed by 188 journalists working in the US, UK, France and Germany.  I found that user-generated live video serves two purposes for journalists in their reporting: 1) as a source of footage that they can include in their own output and 2) as a way of monitoring ongoing situations when having to make decisions about whether to deploy newsroom resources. The research also showed that many newsrooms are in the early stages of establishing workflows and learning how to incorporate these tools for newsgathering and user engagement. A number of people also noted that there hasn’t been enough knowledge sharing across the industry.

Two-thirds of the journalists who responded to the survey explained that they search specifically for live streaming video when looking for user-generated content. “Live video is an invaluable resource,” said Cheryl Smith, Social Media Producer at ITV News. “You often get footage you would never get any other way.” One example cited was the Facebook Live footage taken by Floridan D., which showed the manhunt after the Munich shooting in July and was picked up by many news organizations around the world including The New York Times.

Hazel Baker, Digital News Editor at Sky News, who specializes in social newsgathering, considers live video at the “top of the list” of the tools she uses. Most people interviewed reported that they use Facebook Live most frequently, followed by Periscope. A few people mentioned the platforms Bambuser and Ustream.

The discovery of newsworthy user-generated live video is time-sensitive and there haven’t been any specialized tools established yet that surface it. Journalists rely on their usual social newsgathering tools like Tweetdeck and Facebook Signal, or stumble upon a newsworthy live video in random searches. A few journalists interviewed use Facebook’s Live Map — although many did not know it exists — but wished the tool allowed users to zoom in closer and search by location and keyword.

First Draft News video: “How do you find Facebook live videos for news?” has tips for journalists on how to address these issues by searching through geographic coordinates.

User-generated live video can help newsrooms better understand ongoing news situations. Sky News, for instance, monitored user-generated live video to inform its reporting on the military coup in Turkey. Live video has also been used by journalists to contact witnesses on the ground. This piece by NBC explains how the live video feeds created by pipeline protesters in North Dakota brought their message to a global audience. This was done directly via the tools themselves as well as providing evidence to news organizations thousands of miles away that there was an important story unfolding live.

As well as a source for news-related footage, respondents explained ways they used live formats on social platforms to engage directly with the audience. “It’s essentially a new entry point for our audience to a specific story,” said Todd Olmstead, Senior Audience Engagement Editor at WSJ.com. Journalists can also gauge what people are interested in, for example when reporting within an explanatory format. “With live video we’re not talking at people, we’re talking with people,” said Mark Frankel, Social Media Editor at BBC News.

User-guidance can also assist an investigation and enhance reporting. The most famous example of this was when New York Times video journalist Deborah Acosta used Facebook Live to solve the mystery of a bag full of photo slides she found in Manhattan. “If you open up your research to the world, people come in with tips and enrich the story,” Acosta said. As for how to tackle hard investigations live, “no one has cracked that just yet.”

Richard Gutjahr, a reporter for the German public broadcaster ARD, thinks it’s about time the industry collaborates: “In two to three years, technology will have advanced and using live video will be much more widespread. That’s why it’s important to see now what works and what doesn’t [and share this knowledge with other news organizations].”

Gutjahr was present at the Bastille Day attack in Nice and the shooting in Munich, both of which happened in July. He covered the events with his cell phone, but did not livestream the aftermath of the attack in Nice. Instead, he let his Munich newsroom decide which footage was appropriate to show to the public.

As more social media platforms are integrating live video features like Instagram or extending existing ones likes Facebook Live 360, more newsworthy live video content will become available. My research demonstrates that while many newsrooms see user-generated video as incredibly useful as a resource to support existing newsgathering activities, the industry is working out ways to integrate this type of material, both in terms of workflow as well as ethical challenges. This piece of research on the ways newsrooms used Diamond Reynold’s Facebook Live video of the shooting of Philando Castile, demonstrated the lack of consistency across the industry in terms of graphic warnings, use of pre-roll ads and even the technicalities involved in embedding a Facebook Live video. As newsrooms are clearly seeing user-generated live video as an important resource, I expect to see more collaboration and knowledge sharing about how to use this new stream of footage.

This research was my final project for NYU Journalism’s Studio 20 program, which focuses on innovation and adapting journalism to the web. With my project partner, the Journalism Partnerships Team at Facebook, I conducted a social newsgathering survey this past summer that aimed to better understand how newsrooms use social media for newsgathering. Media Partnerships Managers at Facebook sent emails to managing editors in the US, UK, France and Germany and asked them to share the survey with their social newsgathering staff. I then followed up with interviews with journalists and live video experts.

Kim Bode is a graduate from NYU’S Studio 20 program. Before Studio 20 she worked as a business and finance correspondent in New York.