Pro tips for setting up an efficient verification workstation 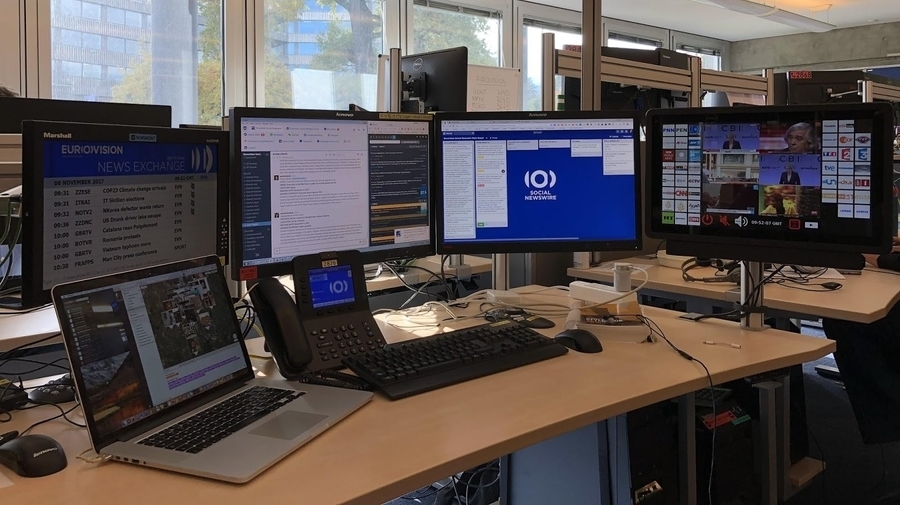 Online verification is a relatively young field. That means new tools are being created all the time, and, as more tools become available and necessary, those working with them are faced with a challenge: How can you set up your workspace to maximize efficiency and make your job easier?

I first entered the verification space when I joined Storyful in the summer of 2011. Even back then, when the amount of information circulating on social networks was far less, it was common for the screen to become a dizzying jumble. Where, among all those browser tabs, was that photo I’d been looking at? Was my messaging service open somewhere? And where on earth was that noisy, auto-played ad?

The need for best practices was clear. And as it turns out, the habits that have emerged in disparate organizations bear many similarities.

Unsurprisingly, there’s a consensus that more screen space is always a help. As the shift to mobile accelerates, fewer and fewer people own a desktop computer or large screen of any kind. But when you are trying to pick out fine details for visual verification, bigger (and higher resolution) is naturally better.

Two screens is generally accepted as the minimum requirement. This allows for:

Fergal Gallagher, a social news gathering producer for ABC News, explains: “Setting up your workstation properly is vital if you’re going to be able to work effectively. I generally have two monitors connected to my desktop but will open up my laptop also if I’m particularly busy.”

European Broadcasting Union digital sub-editor Derek Bowler (whose workstation is pictured at the top of the article) is an advocate of creating as much screen space as possible.

“My stationary monitor is set up with my constants. The main driver on this screen is the Eurovision Social Newswire… which allows easy communication between the social newsgathering team in Geneva, and over 600 members from across the EBU membership.”

Bowler uses what he refers to as his “workboard” for actively discovering and verifying content, as well as monitoring the stories the Eurovision Social Newswire team is working on.

“Outside my two main screens, I have one for monitoring content passing through the Eurovision News Exchange, and a touch screen which gives me access to up to 50 live broadcasters from around the world, where I can watch six live broadcasts at one time.”

He also presses a laptop into service for video editing and recording calls with sources.

With so much information circulating, it’s crucial to have uninterrupted access to your main monitoring/discovery tool, whether that’s a paid service such as Dataminr, a free one like TweetDeck or an internal tool of the kind developed by numerous news organisations.

However, the lack of a Minority Report-style set-up isn’t necessarily a fatal handicap.

One of the most prominent organizations in the new wave of verification specialists is Bellingcat, whose work on some of the world’s most controversial trouble spots, such as Syria and Ukraine, shows that a massive budget is not everything.

“I’m lucky to have two big screens for my desktop,” says Aric Toler. “I run TweetDeck in one to monitor going-ons, and do my main work on the other.”

It’s not uncommon for people to own a number of devices, and these can be pressed into service if used in the right way. My own home configuration usually involved two main desktop screens, an old tablet that I used solely to monitor a single service, and a phone for push notifications.

Judicious use of notifications is in itself a useful practice, and can help keep you informed when you can’t have everything you want constantly in your line of sight. It’s worth getting familiarized with how notifications and alerts work across various tools, and tailoring them to suit your workflow.

Browser extensions and bookmarklets are another useful addition to your workspace, allowing you to quickly perform functions such as reverse image searching, checking EXIF data and archiving content without opening a new tab and entering information. While Google’s Chrome has a clear lead in the number and variety of extensions available, these can be installed in other browsers – most easily in Opera.

With such an array of possibilities, having a routine is essential. Storyful journalist Peadar Grogan explains that consistency is key to a smooth beginning at every shift.

“I open the same key tabs in the same order each morning, so I know instinctively where everything is throughout the day. I also have bookmark folders for different topics – just right-click to quickly open all your sources of information on a given subject.”

“If you’re using Chrome, managing your profiles is key to quickly getting the information you need. I’m signed into three profiles at all times – personal work Gmail, personal home Gmail and shared work Gmail – and signed into different services on each. This means access to multiple instances of the same apps at the same time in different windows.”

The number of tabs one has open can quickly become overwhelming, however, as George Sargent, Reuters Acting Global Head of UGC Newsgathering, explains.

“One of the hardest things for a social media producer to do is to compartmentalise their desktop when staying across multiple stories. Before you know it you have 40 tabs open, with local reports, eyewitnesses, breaking news users and non-useful accounts all in the same window.”

This means an indispensable part of the workflow is maintaining what I like to call “browser hygiene” – making sure you don’t leave unneeded browser tabs open before your computer grinds to a halt as memory becomes saturated. There are numerous services that can help with this: Tabs Outliner allows you to quickly identify and close tabs. The Great Suspender suspends tabs after they have been idle for a while, allowing you to reactivate them with a single click, and the Session Buddy extension can also give you some peace of mind by enabling you to save a set of open tabs to revisit later.

Having some way of keeping track of the multitude of steps and sources that can quickly pile up is also important. Pocket and Evernote are widely used, but in the end it’s largely a matter of personal preference. There is no shortage of options: Redondo, for example, is an enthusiastic user of Diigo, which has been around since 2006.

Of course, when closing tabs, it’s important to be aware that the content or information may not necessarily still be online when you return.

“Archive everything that you can,” says Toler, “especially every tweet/social media post, as you never know when they’re deleted. And could be gone forever.”

Services such as Wayback Machine and archive.is allow you to capture a copy of online content, preserved exactly as it was at that moment. This is far superior to the common practice of screen-grabbing controversial content, as these can too easily be faked.

Immersed in this world of web services and constant social media updates, it can be easy to forget that news often comes via other sources. Sargent says, “I’d recommend having as many television screens as possible near your eyeline with 24-hour rolling news on display.” This is a point echoed by Bowler and Gallagher.

Ultimately, set-ups and routines are dictated by the job at hand. But at least identifying and organizing the tools and workstation that will best serve your needs should increase your effectiveness, and reduce headaches.